Graveyards can be sombre and contemplative spaces.

Coming across a 17th century burial site just above the Kanmangafuchi Abyss in Nikko, that was interring “The Graves of the Self-Immolation”, was especially intriguing.

I’ll admit that I wasn’t exactly sure what ‘self-immolation’ meant and had to have Geoff explain to me that self-immolation is the act of killing oneself as a sacrifice, often by fire, starvation or ‘seppuku’ (hara-kiri).

According to the Nikko Historical Walking map, there are 24 gravestones in this secluded burial site- five of those who died were retainers of the 3rd Tokugawa Iemitsu Shogun and the other 19 were “vassals who devoted themselves to the Tokugawa shogunate.” They died on April 20, 1651. 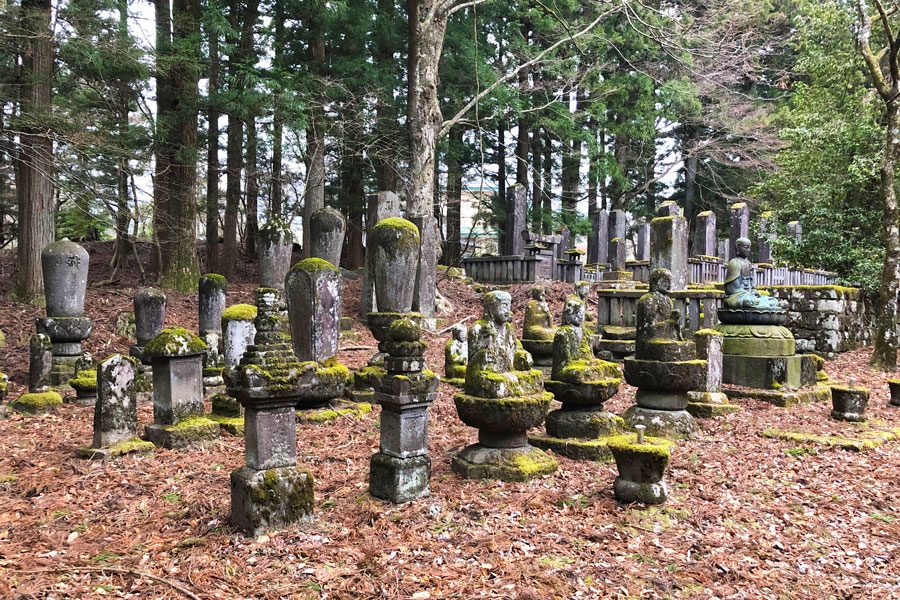 Researching it later, there is even a term for following your shōgun or lord into death – ‘Junshi’ – which is essentially suicide due to extreme fidelity. Apparently it was acceptable practice in medieval times for Japanese vassals (people that are in service to the shōgun) to voluntarily commit suicide if their lord was slain in battle or murdered. This was outlawed in 1661, a mere decade too late for these poor men.

It is sobering to contemplate these rituals and these lost lives from so long ago while surrounded by the established forests of enormous cypress trees that may have witnessed the historical events that took place in this region. 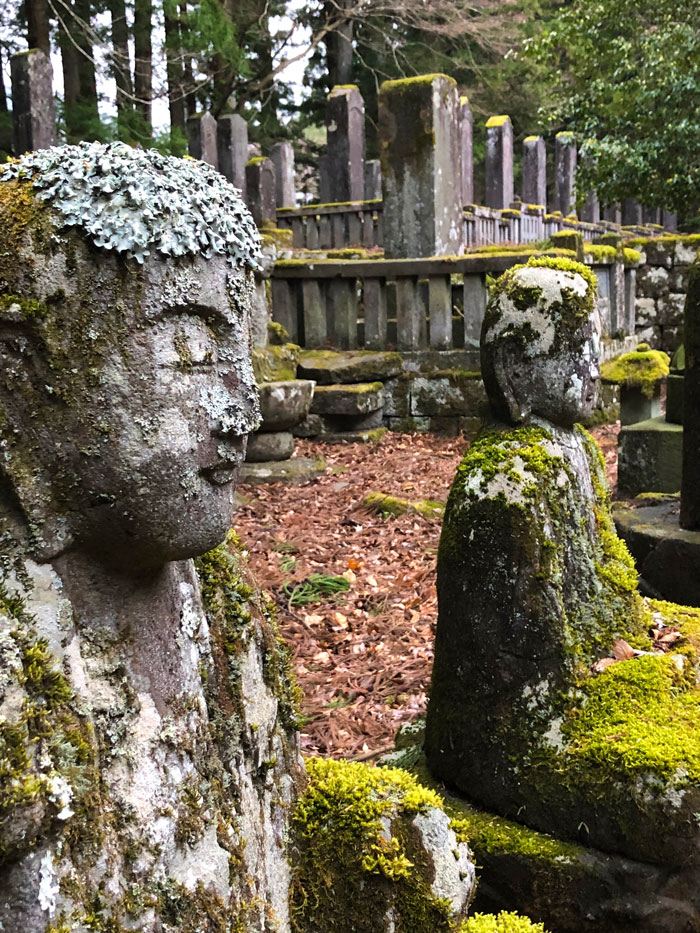 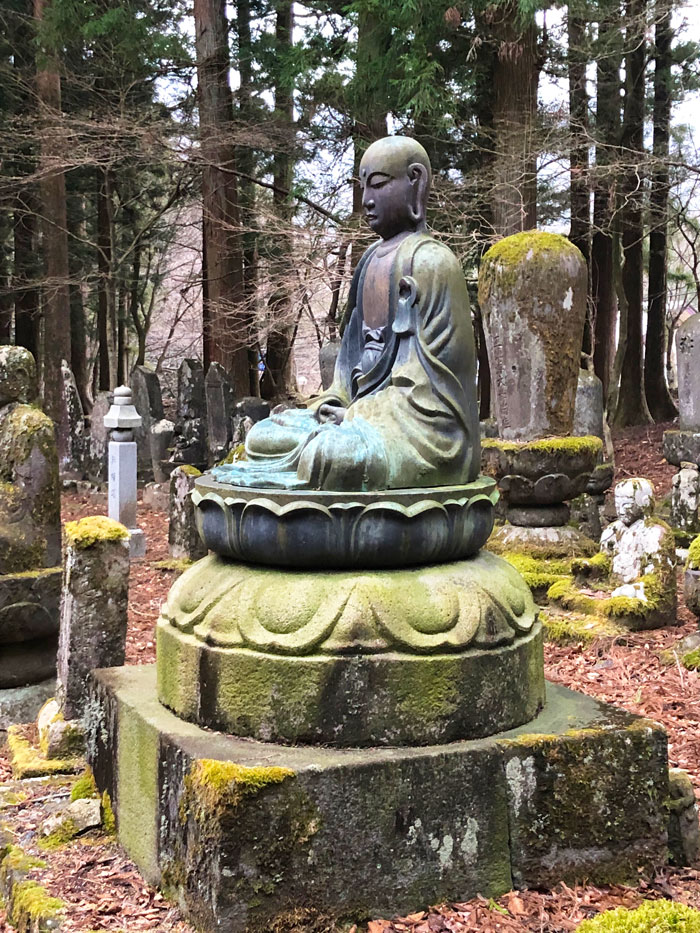 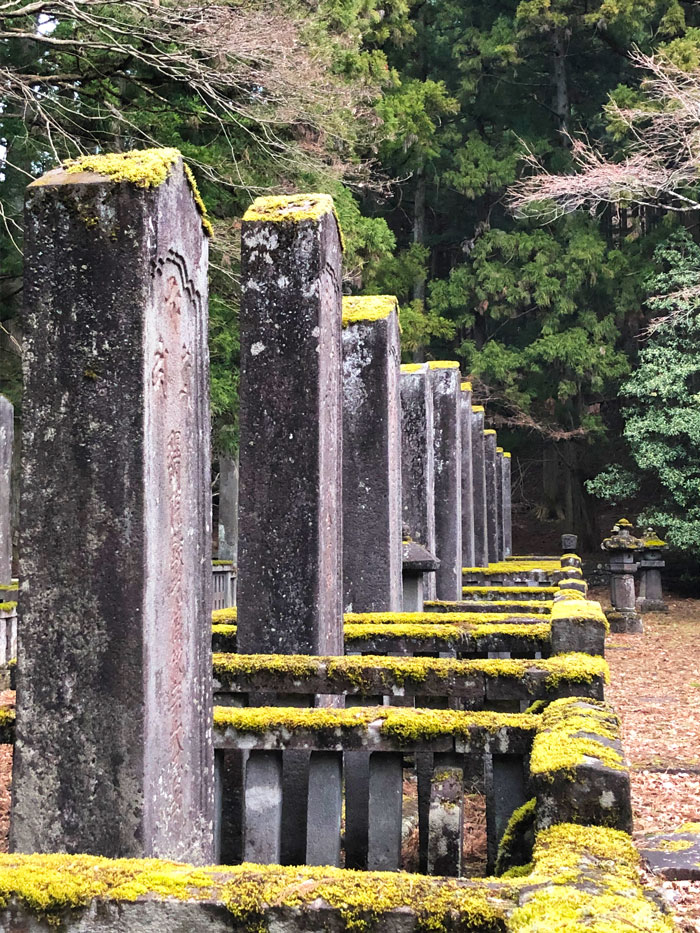 It is a special place, this quiet and chilly burial ground. The various green shades of moss and lichen, the weathered and worn statues and headstones, the carpet of thick pine needles and twigs underfoot and the gnarled and unruly tree roots are eerily atmospheric. But burial sites in this form are becoming a thing of the past. 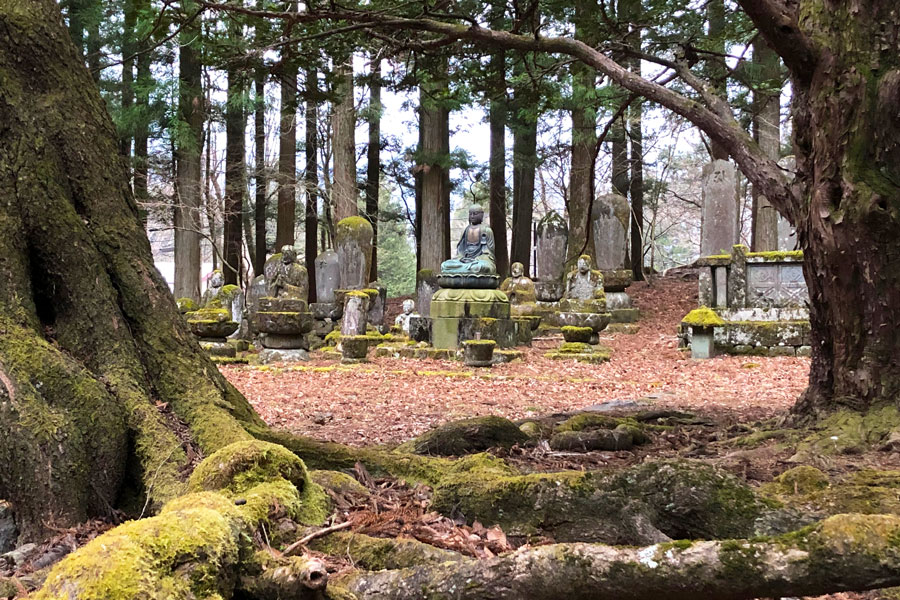 Did you know that Japan’s cremation rate is the highest in the world at 99.9%?

In 1873, despite public opposition, Japan banned cremation on the basis that, burning bodies was disrespectful to the dead, jeopardised public morality and that the resulting smoke was a public health concern. The decision was reversed within two years. (https://daily.jstor.org/history-japan-cremation/) To support this modern way of thinking, recently Emperor Akihito and Empress Michiko announced that they will be cremated after their death instead of being buried, breaking a 350 year tradition. (Wikipedia)

Declining birth rates, an ageing population with the highest life expectancy rate in the world (according to the World Health Organisation) as well as the highest population decline in the world (the population will fall by a third by 2060); significant shortages of space in cities, and skyrocketing prices for cemetery plots have brought on a radical rethink as to how the deceased are both buried and commemorated by those they leave behind. As people die, their cremated remains are stored in burial urns and placed inside the family grave.

As trains whisked us across the country, we passed many of these graveyards that are predominantly family burial sites consisting of a stone monument with a place for flowers, a place for incense and a chamber underneath for the ashes of the deceased. The front of the stone pillar simply states the family name. A totally different feel to Christian burial grounds with the marked absence of crosses and angels. 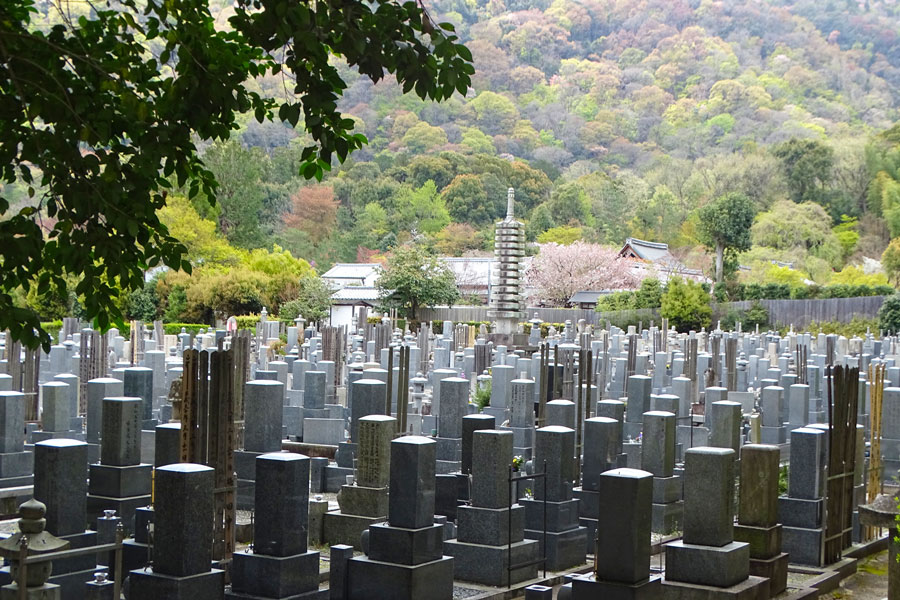 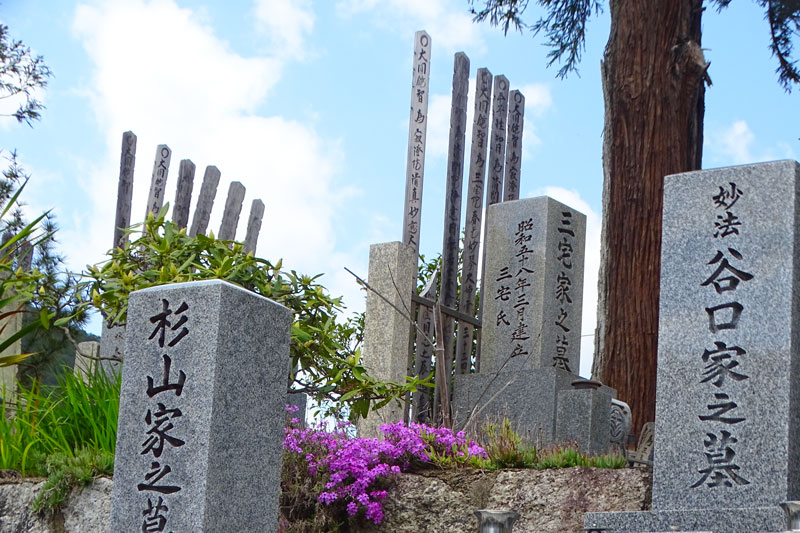 Unlike the West, religion in Japan is not preached, nor is it a doctrine. Religion in Japan is an interesting amalgamation of ideas from both Shintoism and Buddhism. It’s more of a way of life, a moral code even, and it seems almost indistinguishable from Japanese social and cultural values.

Despite the majority of people defining themselves as irreligious, aestheist or agnostic, they turn to religious rituals in birth, marriage and death and take part in spiritual festivals throughout the year, for example the celebration of each season. This is why they say that in Japan, “people are born Shinto, get married Christian and die Buddhist”. (Robert J. Kisala, “Nanzan Guide to Japanese Religions”). Almost all Japanese observe customs that have origins in Buddhism or Shintoism but consider this to be more cultural than religious. 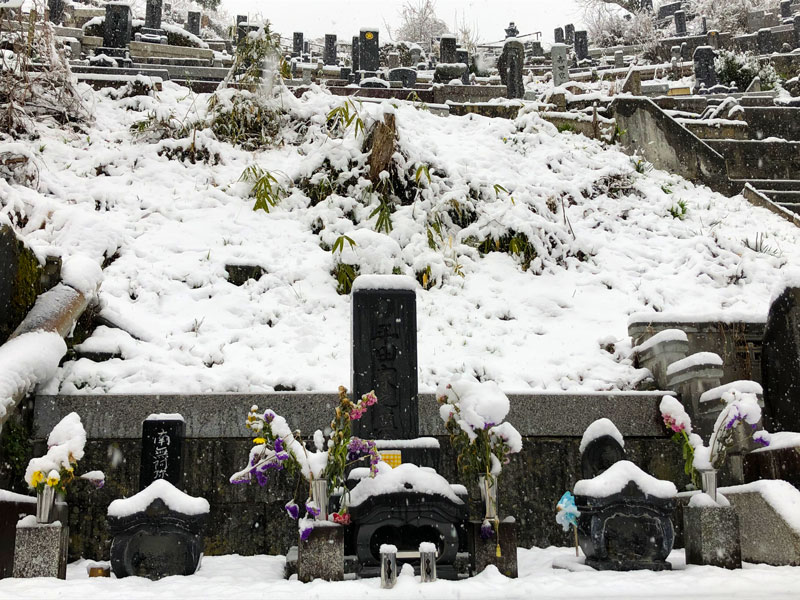 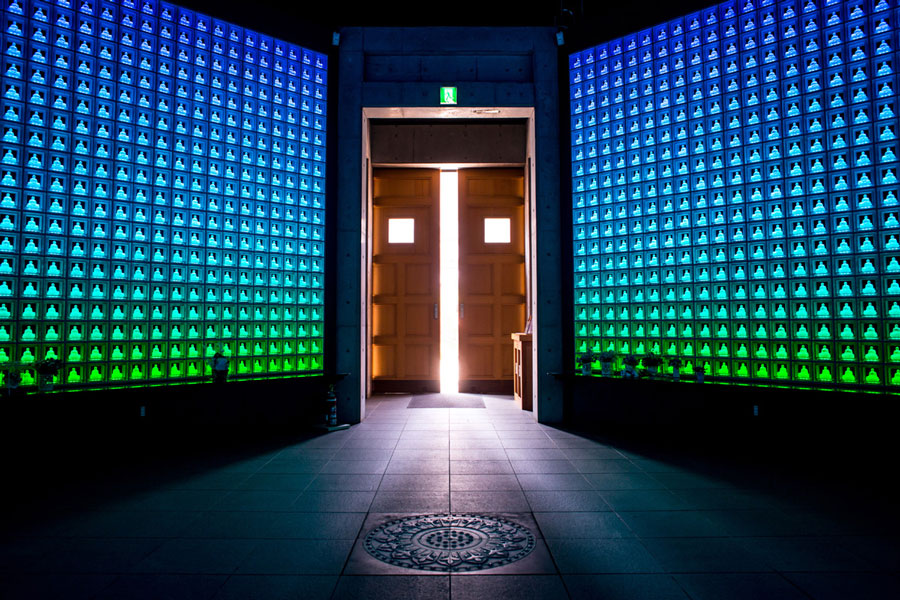 I was interested to read that the Japanese have recently embraced high-tech solutions for graveyards beginning to store their urns in futuristic ‘locker’-type spaces, using swipe-cards and LED displays. These futuristic gravestones are fitted with a smartphone-readable QR code, which can pull up detailed information on the deceased, plus a log showing messages and details from when family members last visited.

A  consequence of the high cremation rate is that there are not enough crematoriums to cope with the demand. A solution for this that is quite hard to get your head around, is the creation of multi-storey  corpse “hotels”, where the deceased can be ‘checked-in’ by family members and kept on ice as they wait out the urban cremation queues. (The Japan Times)

We were surprised to find the city trains just as packed with men in suits and ladies in smart trench coats and heels on weekends as during the week. In Japan, corporate life is so intense there’s actually a word to refer to people dying from overworking: ‘Karoshi’ which literally translates to “death by overwork.” I find this a curious contradiction in a country that values mindfulness and zen. However, apparently there exists a concept in Zen Buddhism called ‘gaman’, or the virtue inherent in one’s ability to endure the unbearable with patience and dignity. Working excessively can thus almost be viewed as a spiritual experience, i.e., “When you toil, your heart is at peace”. 🤔 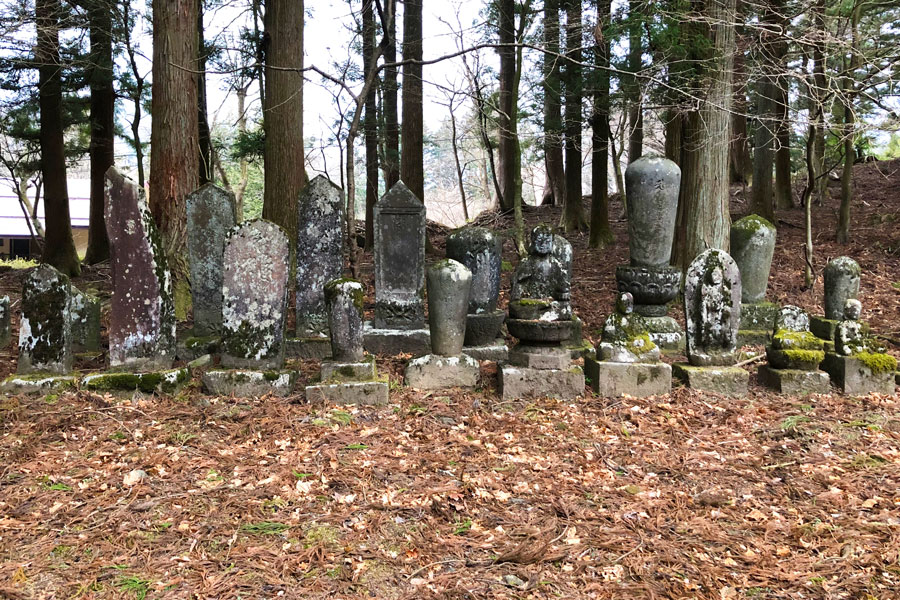 PrevPreviousA day and a night in Nikkō, Japan
NextNakasendo Way – On the path of ShōgunsNext