Nakasendo Way – On the path of Shōguns

The local Chuo train pulled into Narai having stopped at every station dropping locals off with their shopping. Narai is a simple country station, obvious by its lack of electronic station boards and station master. We wandered up the main street, the beautiful restored wooden buildings seemed to lean in on you. It was very quiet. We found what might be Minshuku Shimada and left our luggage on the pavement as checking time was only at 3pm and went exploring and looking for somewhere to eat. (Where else in the world would you feel comfortable doing this?) A few shops were open either selling ice cream or the lacquerware for which the area is famous. The restaurants were all closed. 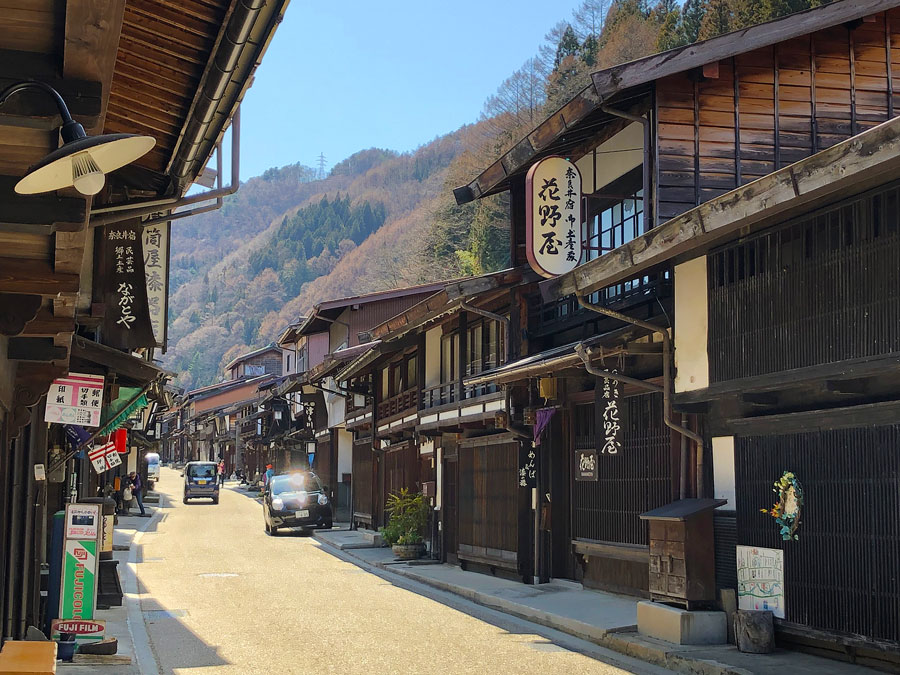 Our tummies were rumbling and we were contemplating having ice cream for lunch when we we saw a little old lady disappearing into a tiny doorway to what looked like an eating place. We followed her in and found a delightful local eatery. We ordered bowls of pork and rice and, as always, it came with a set of miso soup and interesting pickles. Delicious. 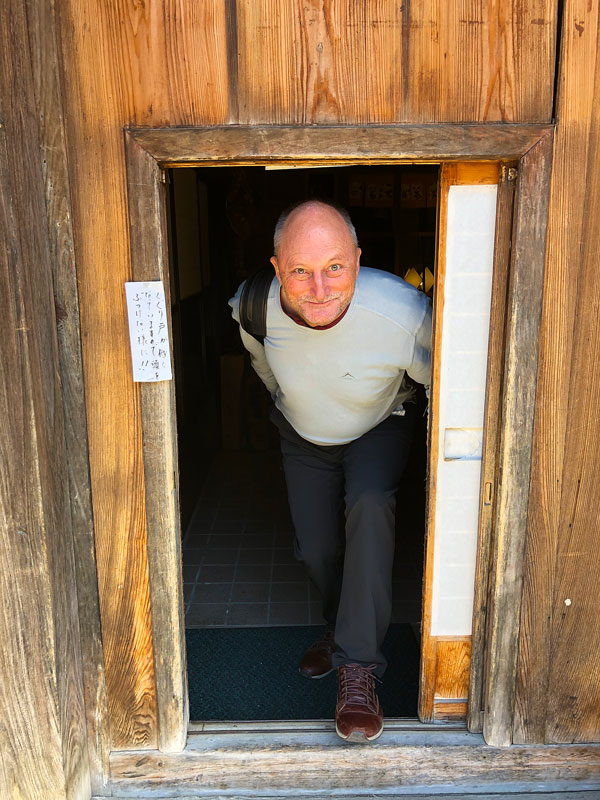 Suitably fortified, we explored the local cemetery (as Nikki can’t walk past one!) and walked through Cedar Tree Avenue to the home of 200 Jizo’s which had been collected from the surrounding area. We were the only ones there and it was so peaceful to just explore and contemplate at leisure. 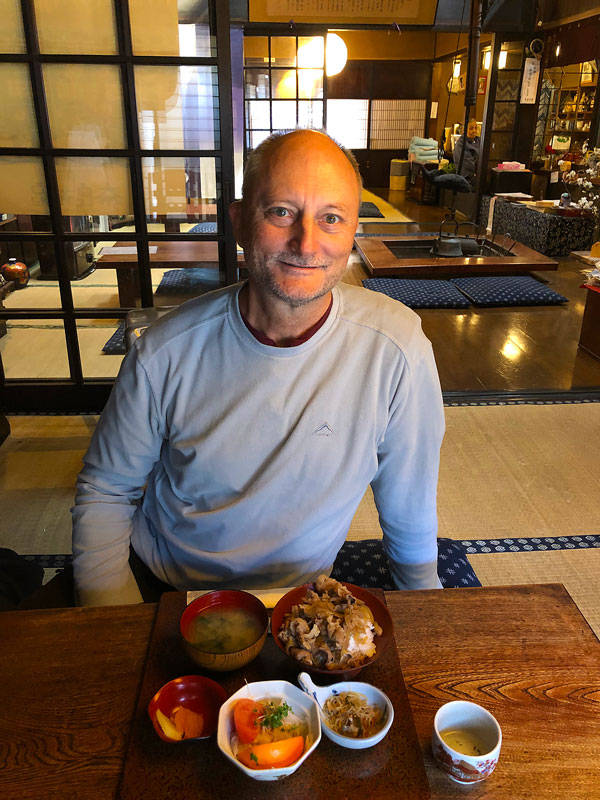 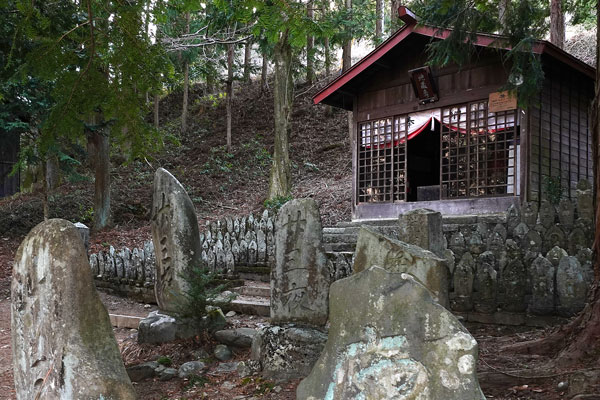 At 3pm we check into our Minshuku with a warm welcome from Mr and Mrs Shimada who have substantially more English than we have Japanese, but most communication is with smiles and pointing. Our room, as expected, is simple with tatami mats and futons. A thermos, which we are to discover is incredibly efficient, is ready for hot tea and rice cakes. We relax and catch up with photos and reading.

Minshuku are family operated, Japanese-style bed and breakfasts. They offer visitors a good opportunity to meet local families and experience the traditional Japanese lifestyle. Guestrooms are usually Japanese style – sitting, eating and sleeping on the floor with shared bathroom facilities.

At 18:30 there is a knock announcing dinner. The dining room seats about 10 on mats with low tables. Dinner is a huge spread of bowls with interesting but totally unrecognisable things, other than a whole fish and a cast iron pan on a gas stove. Mr Shimada comes out with yet another plate heaped high with lettuce, onion and thinly sliced pork. Seeing our confusion he shows how to switch the stove on, adding a selection from the plate with liberal amounts of soy sauce. It is delicious, but the best is yet to come. The soy caramelises and gets all sticky and gooey – yummy. 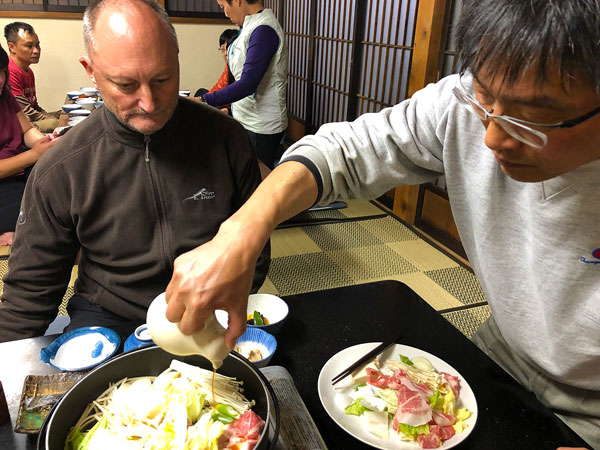 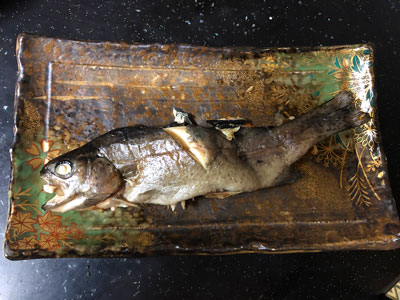 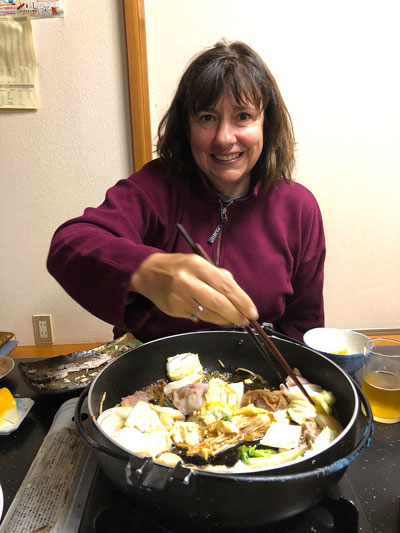 Our dinner companions had planned to start their Nakasendo trail the next day as well, but as the weather predictions for were for snow, they were going to relax in town and go the day after. We laugh as the predictions for snow had been on and off for weeks and the day had been hot and clear so we weren’t convinced. But we had packed the right clothes and, rain or snow, we are determined to go.

Mrs Shimada asked them to tell us that we should go look at the bridge again as it was all lit up at night. We wrapped up warmly as the temperature drops dramatically at night and strolled down to the river. It really is quite beautiful, the harsh background softened by the shadows..

The Kiso Ohashi bridge crosses the Narai River and  is one of the longest wooden bridges in Japan. (30m). 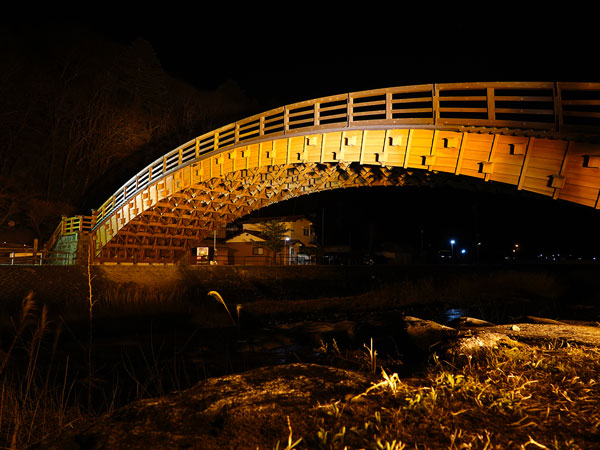 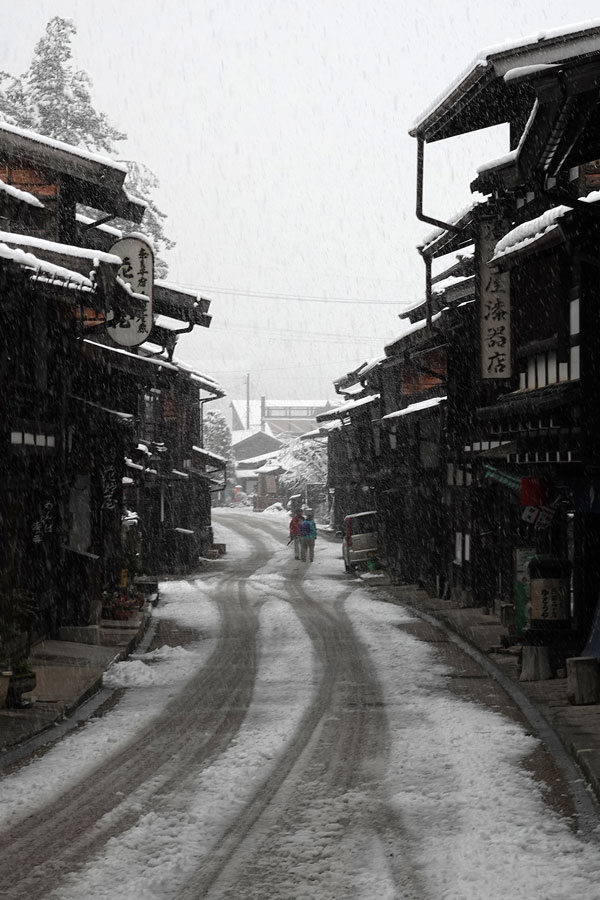 The next morning we wake to a winter wonderland with light snow falling. The bridge is in its third iteration for us now. We are very lucky! 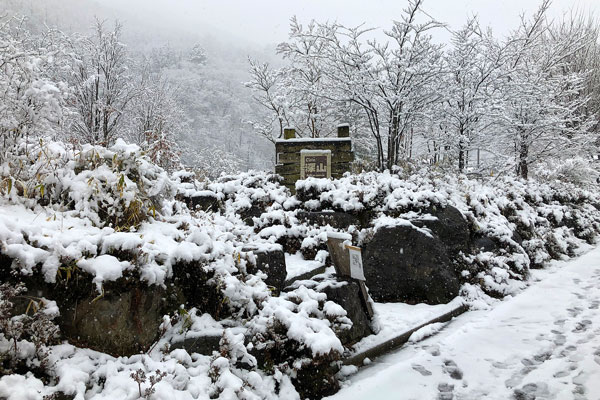 The Nakasendō (Central Mountain Route), also called the Kisokaidōwas one of the five routes of the Edo period, and one of the two that connected Edo (modern-day Tokyo) to Kyoto. There were 69 stations or post towns between Edo and Kyoto where messengers, monks, merchants and samurai could rest between each stage with a total distance of about 534 km.

Narai marked the half way point between Kyoto and Edo to travelers along the Nakasendo Route. It was the most wealthy post town of the Kiso Valley, Narai’s wooden buildings stretch for over 1 km, and was sometimes referred to as “Narai of a Thousand Houses”. 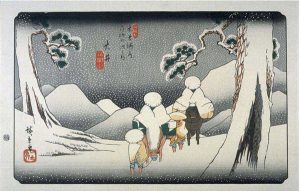 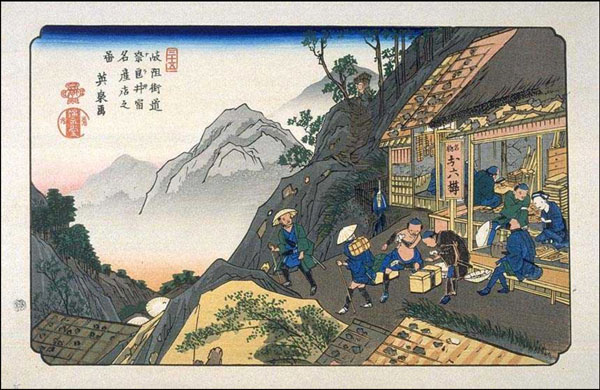 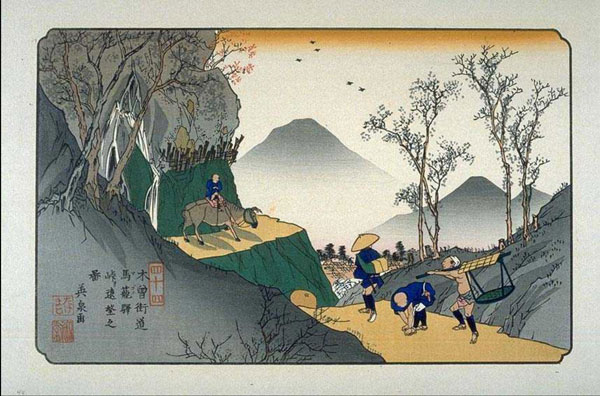 Our plan is to walk from Magome to Tsumago reputed to be one of the most beautiful sections of the Kiso Valley. We need to catch a series of trains and buses all timed so that we would be able to enjoy both breakfast and supper at our Minshuku. 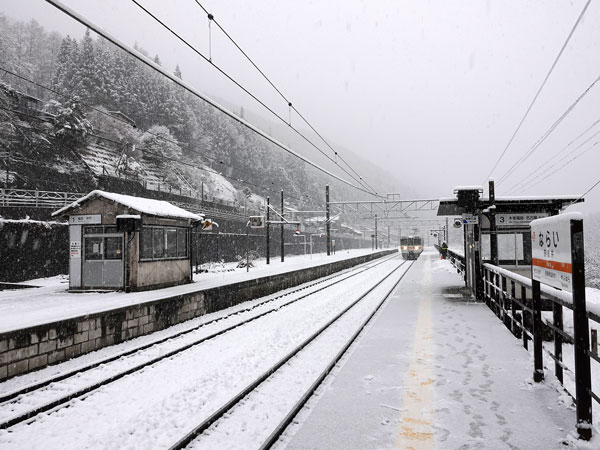 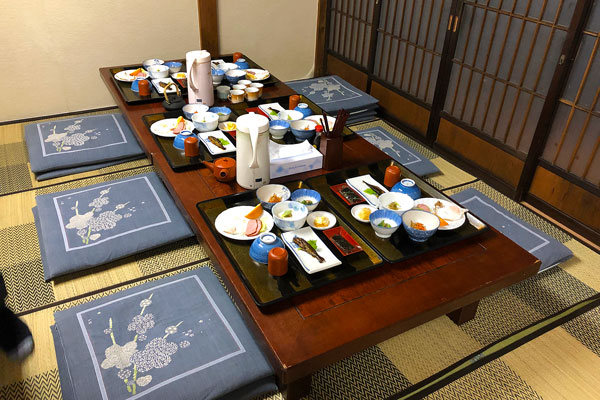 Breakfast is a spread of deliciousness

As the train travelled away from Narai, the snow thinned and by the time we arrived in Nakatsugawa there was no snow on the ground. There was a light rain though and we rushed to get some basic snacks and two umbrellas before catching the bus to Magome! We had been looking forward to buying see-through umbrellas in Tokyo but hadn’t needed to. We arrived in Mangome as did quite a few tourists, many not well-dressed for hiking. We didn’t spend much time in the town as it looked quite touristy and we were keen to get going on the hike itself. The start of the trail was quite well signposted and by the time we reached the outskirts, we were the only ones on the trail.

The trail winds around the contours of the hills following the river line, crossing wooden bridges, the stone path passing through mossy bamboo and cedar forests with a splash of colour from Japanese maples and the occasional cherry tree.  Bear bells are positioned at regular intervals supposedly to scare away bears – but might well be interpreted by bears as “here be food”.  A few hamlets serve free tea, with a box for donations to replace supplies. The trail is quiet and peaceful and we encounter perhaps a dozen other hikers. 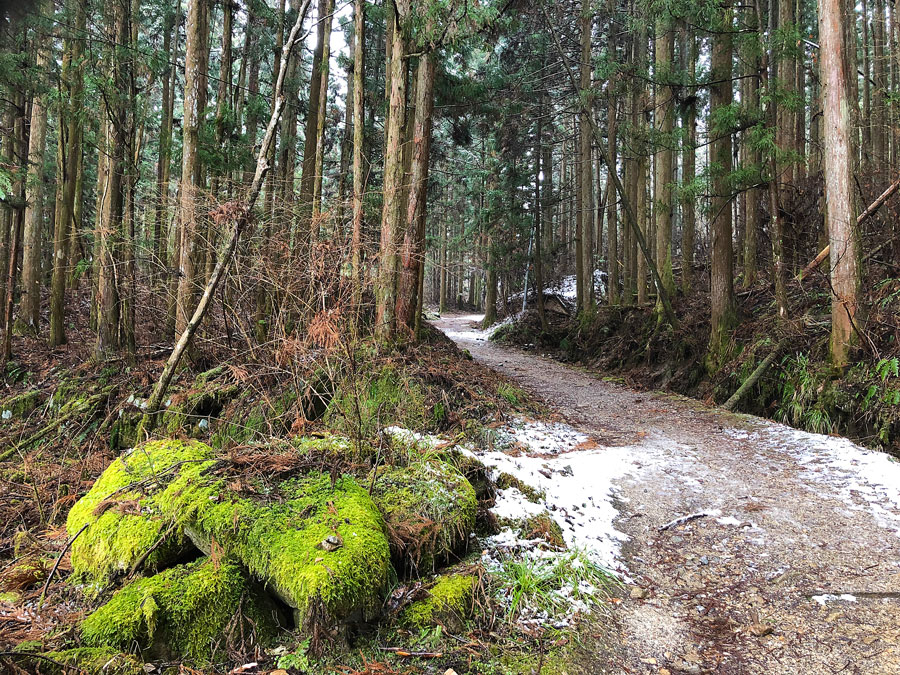 The first third of the journey is uphill and the last two thirds gentle downhill. It is easy to walk and the gradients are manageable. It is hard imagine how the nobles and their trains of servants managed to squeeze onto it. One reputed procession of a bride sent to Edo in 1861, consisted of tens of thousands of attendants (possibly as many as 30,000). It is said that the procession was over 30 miles long and took 4 days to leave Kyoto.

I like this style of hiking especially once we had worked out a routine of perfectly balancing the see-through umbrella, removing gloves, pulling out cameras, taking off lens hoods and taking photographs. 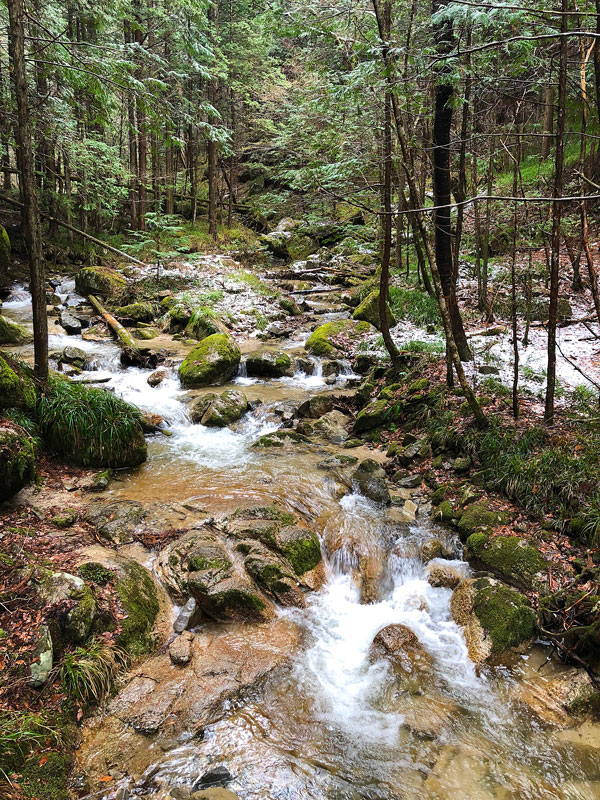 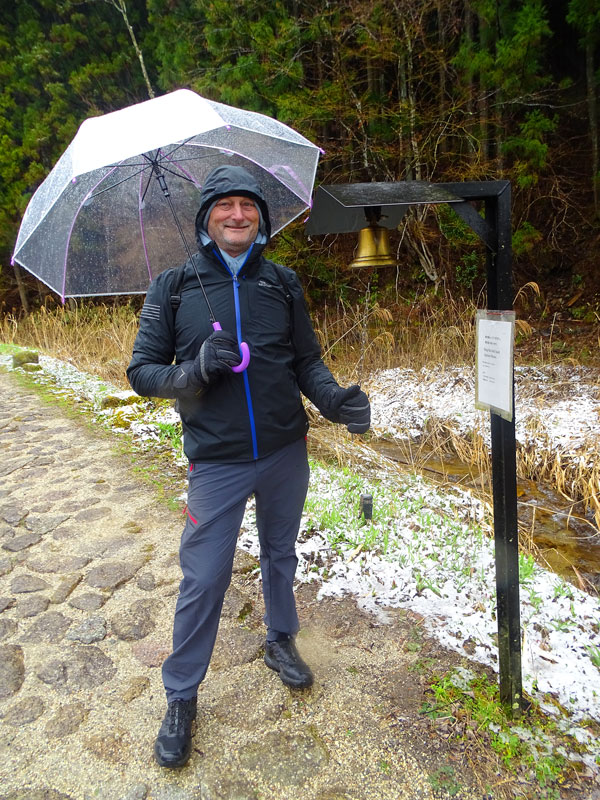 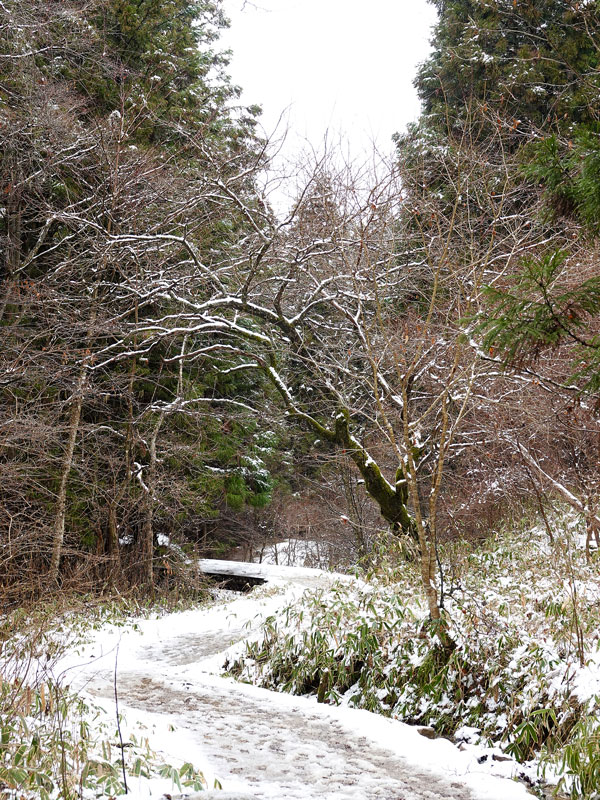 As we climbed back into the snowline, the temperature dropped but we were well dressed and warmed through by the exercise although Nikki’s shoes were wet as she had trudged through a snow field to get an elusive picture of snow on cherry blossoms. This is one time when the ubiquitous heated toilet seats was much appreciated. Yes! In the middle of the Nakasendo Trail. At some point we realised we had missed the 14:06 bus and were nowhere near the end of the trail. (Taking so many photographs adds a significant amount of time!) We resolved to enjoy ourselves and worry about getting back in time for supper when we got to Tsumago. 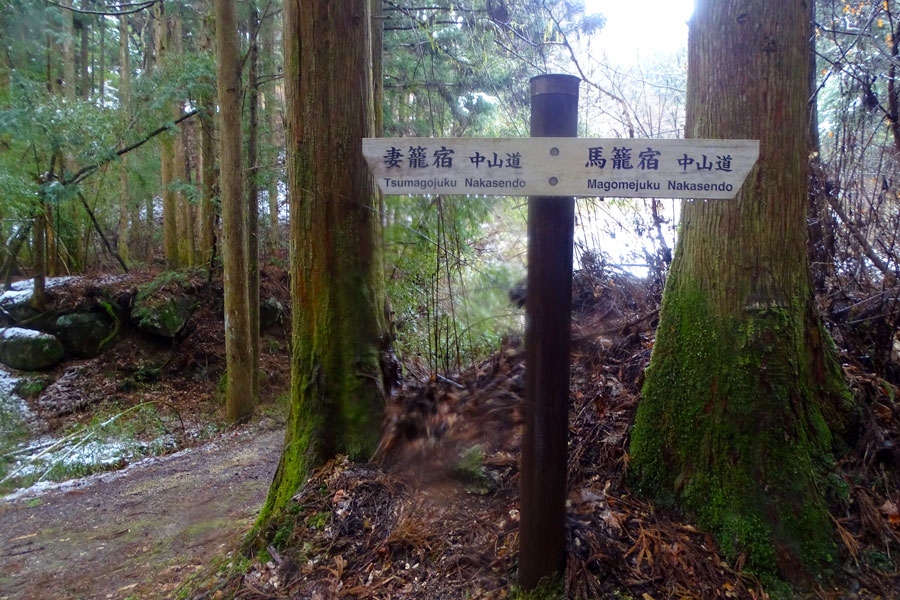 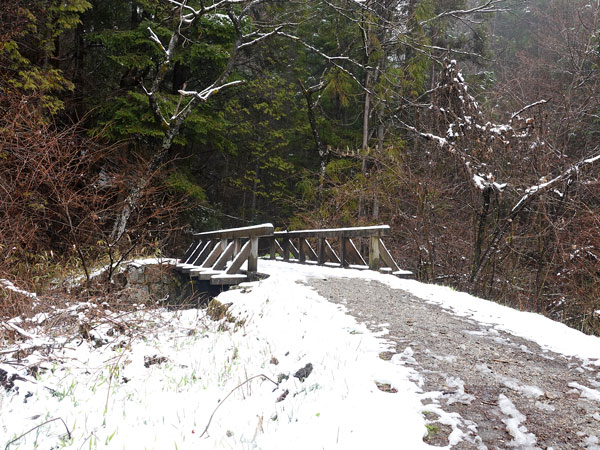 In Tsumago we had tasty, hot oyaki (steamed pork buns) and caught a bus to Nagiso. The station person was incredibly helpful. “Take the Limited Express train to Kiso-Fukushima and then the local train to Narai.” – well in time for a shower before yet another glorious supper 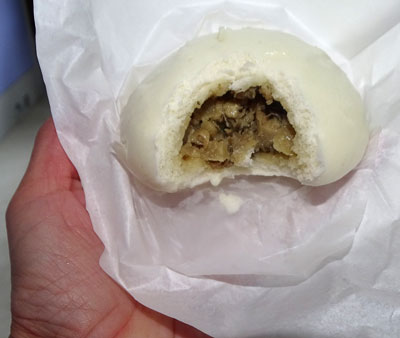 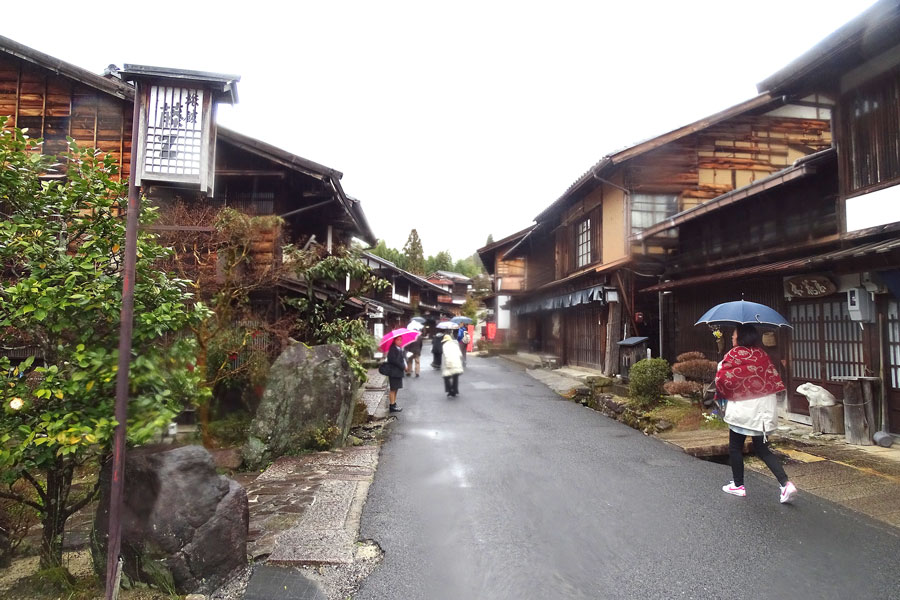 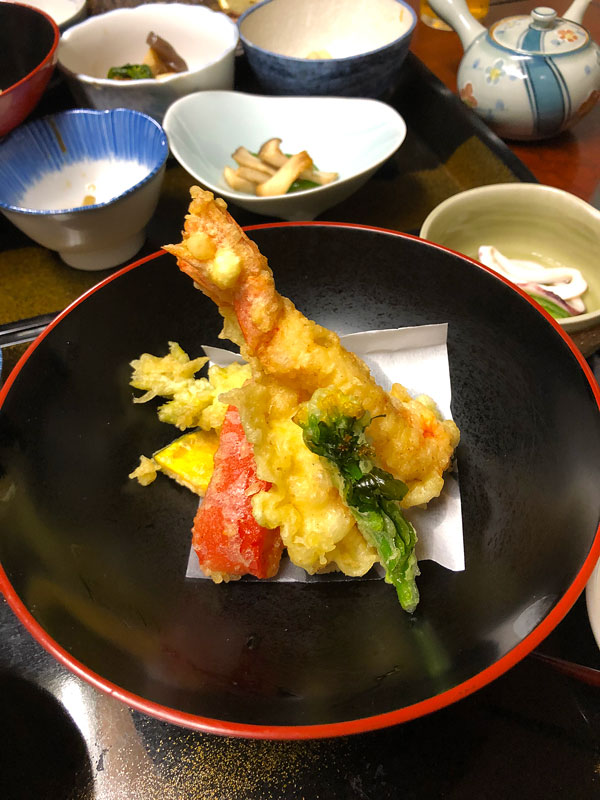 We knew we had to settle the bill for the Minshuku in cash, but when we came to leave we found we had insufficient. Highly embarrassing. More so when Mr and Mrs Shimada thought that perhaps we were disputing the bill. Eventually a guest who could speak English was pulled from his breakfast to assist. Credit cards? – No. US dollars? – No. The booking company could be used, but they were concerned that we would have to pay a fee and we were concerned they would might only get their payment later. All through this Mrs Shimada was apologetic as if she was to blame, especially as she knew we wanted to catch the “8:41”. Eventually it came to light that the Post Office had an ATM and should open at 9:00 and she sincerely hoped it would. The next train would be at 11:35. She later let us know that we could take a local train at 9:16 to Shiojiri (opposite direction to where we were going (and then take an Express train to Nagoya where we could get the Shinkansen to Osaka.

So after more opportunities to take more photographs in the snow, we were at the Post Office at 9:00,  drew money, paid and made the train with a just a little bit of running.

Narai and the Nakasendo way were a perfect and necessary foil after our manic experience of Tokyo and combined with the warmth of our hosts and the wonderful food make us determined to return.