A day and a night in Nikkō, Japan

Two hours from a Tokyo by bullet train is the UNESCO World Heritage site of Nikko. Nikko is famous for its natural scenery of gorgeous mountains and rivers and also for its historical shrines and temples.

After a rather warm Tokyo where we had been wearing t-shirts, it was notably chilly in Nikko. We were glad of our fleeces, puffer jackets, beanies and gloves. We certainly needed them!

We bought tickets for the World Heritage sight-seeing bus that whisked us through the town of Nikko and up towards Futurasan and Toshogu Shrines. 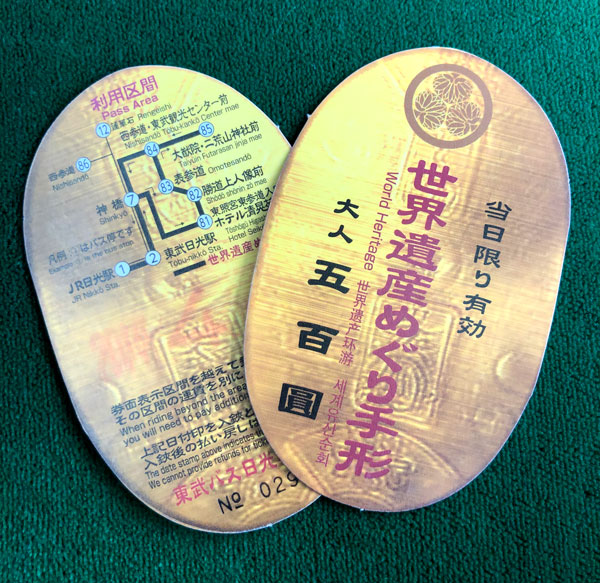 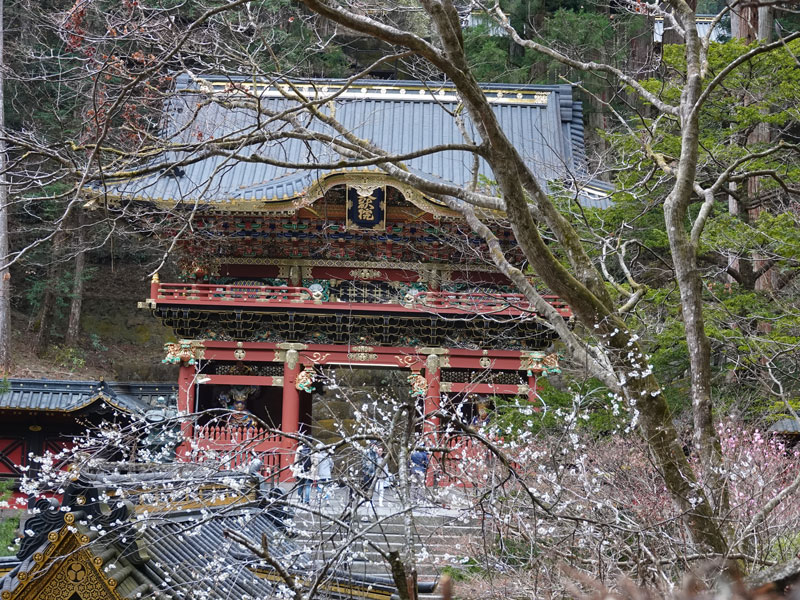 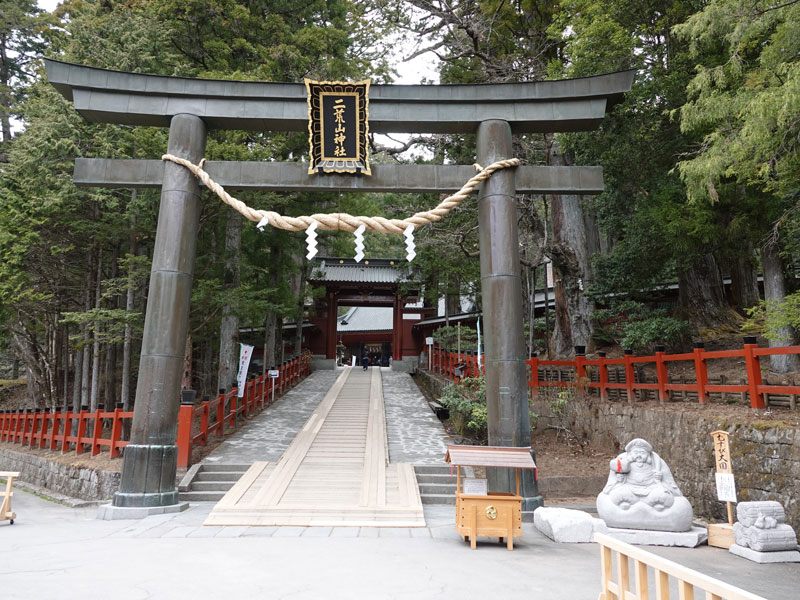 Futarasan Shrine stands next to Toshogu in central Nikko. Much older than its more lavish neighbor, Futarasan Shrine was founded in 782 by Shodo Shonin, the Buddhist monk who introduced Buddhism to Nikko.

The area around the shrine has a lovely forested garden, a spring and old sacred trees. it is located one kilometer from the Tōshō-gū shrine grounds so we were able to walk there. 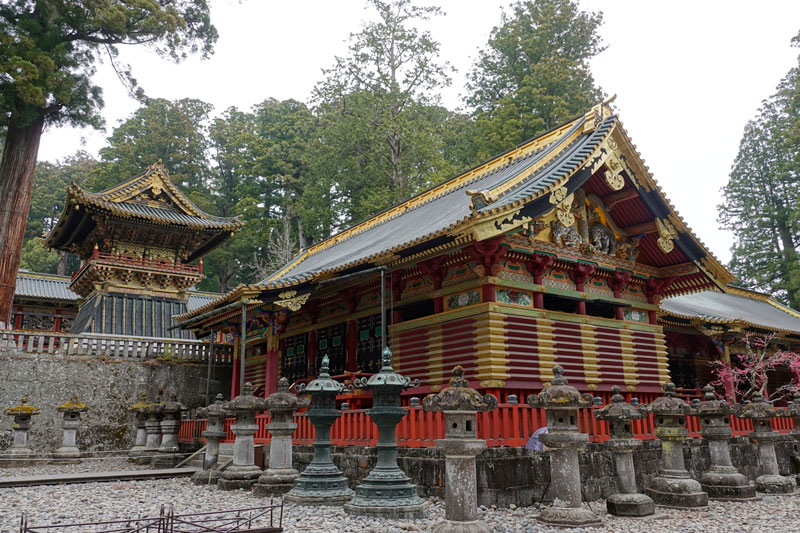 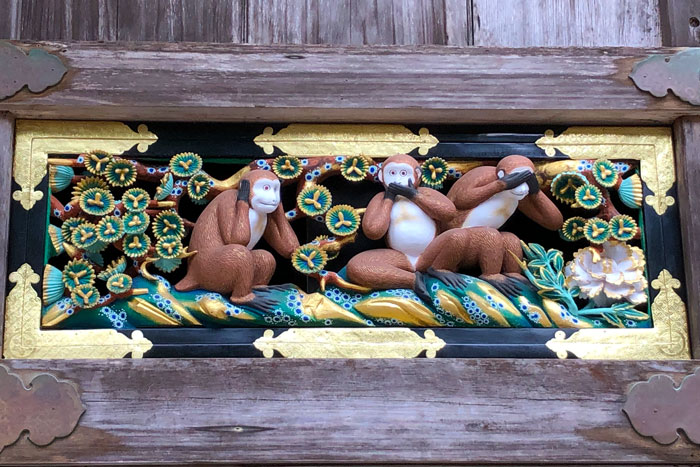 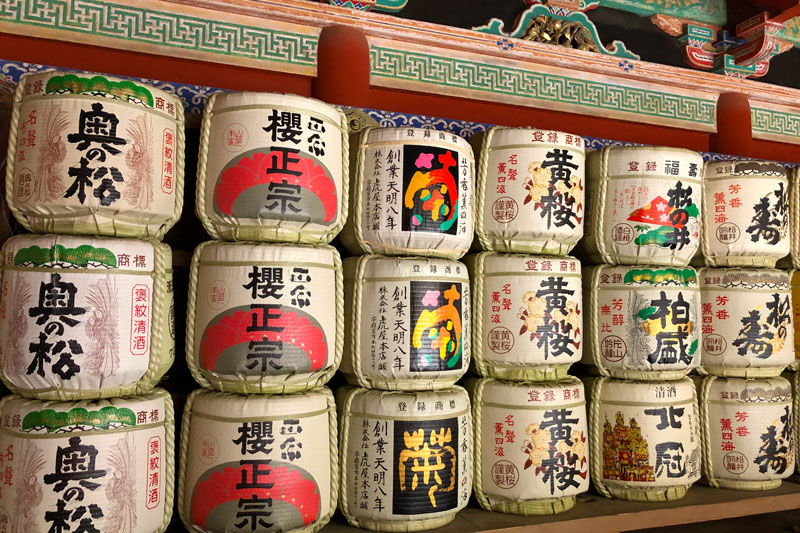 Toshogu, the home of one of the most influential Shoguns, Tokugawa Ieyasu, whose dying wish was to be enshrined here in the 17th century.The lavishly decorated shrine complex consists of more than a dozen buildings set in a beautiful forest. Countless wood carvings and large amounts of gold leaf were used to decorate the buildings in a way not seen elsewhere in Japan, where simplicity has been traditionally stressed in shrine architecture. Toshogu contains both Shinto and Buddhist elements. This shrine was built 400 years ago. It is located on a hilltop and massive in its expanse. Within Tosho-gu, the most picturesque places include the Five-Story Pagoda and the Three Wise Monkeys carving – the original artwork for the three “hear no evil, see no evil, speak no evil” monkeys. 🙉🙈🙊. The walk up to the complex is amazing, and the ancient cedars towering throughout the grounds are simply wondrous. 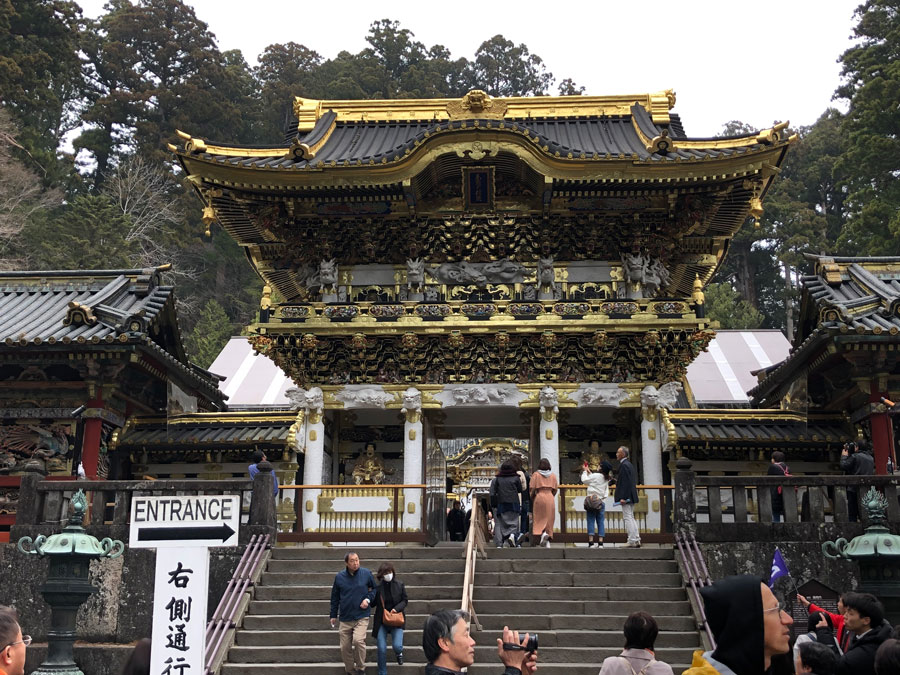 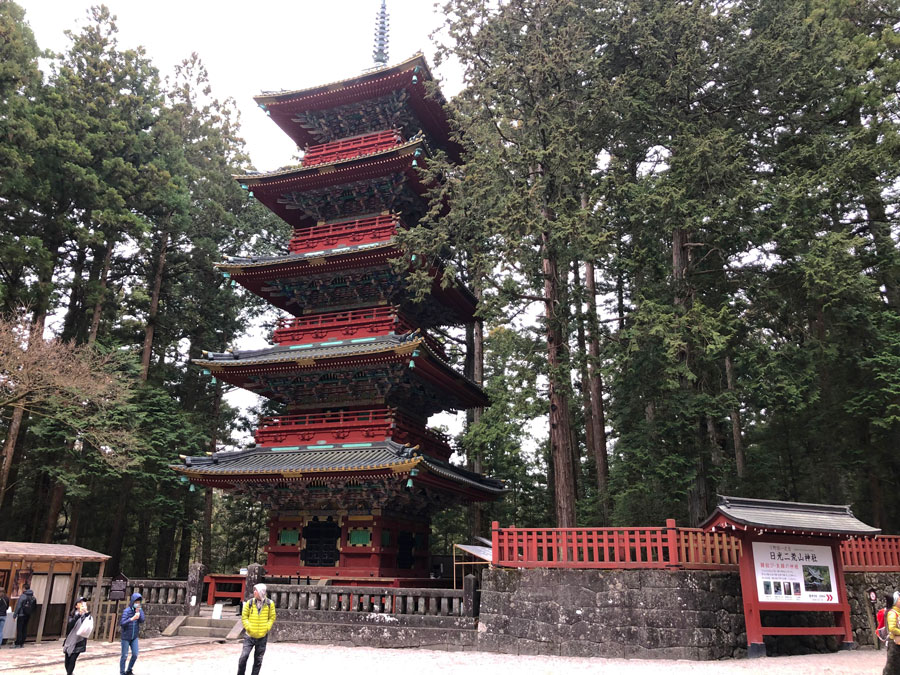 We took a stroll down to to the Shinkyo Bridge on our way to find lunch. The bridge is ranked as one of Japan’s three finest bridges and was constructed in 1636. The Shinkyo Bridge also belongs to Futarasan Shrine and is seen as the gateway to the complex. It’s quite majestic and must look spectacular in Autumn when the hillside is alive with colour. 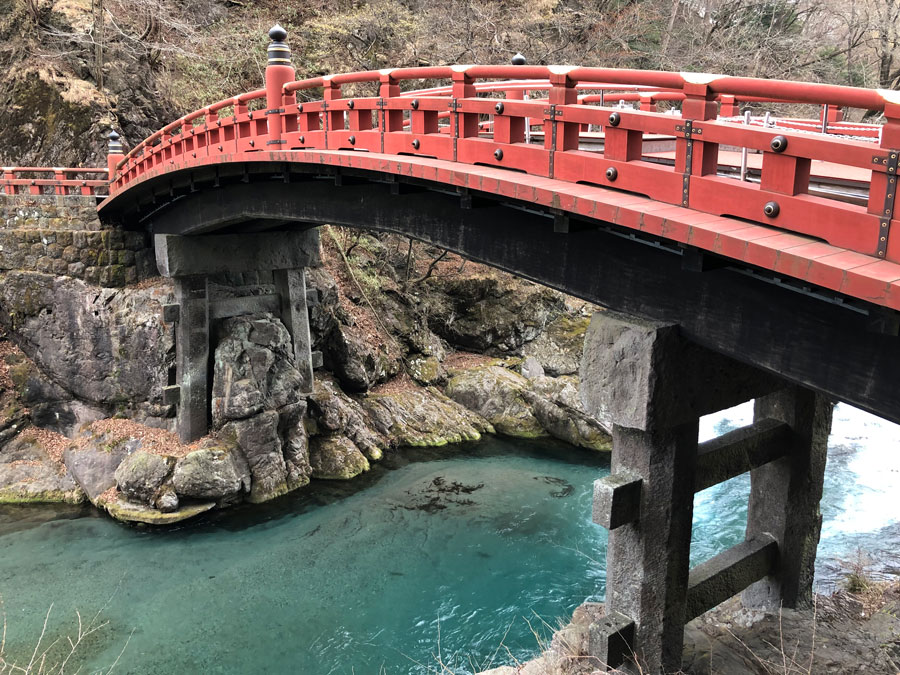 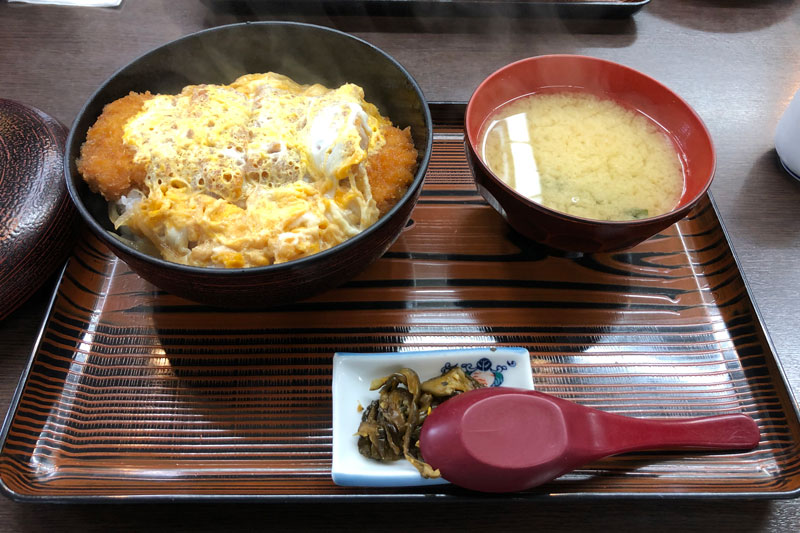 After much walking through the town and not having much success with the bus system, we eventually made our way to a tiny spot that had been recommended in one of the blogs Geoff had found. We struggled to find it but eventually matched the Japanese characters for its name on the blog to the sign outside the restaurant. We were enormously pleased with ourselves at ‘reading Japanese’. The restaurant looked completely dubious but the meal it produced was delicious as promised. We had a crumbed pork cutlet which came with egg on a bed of sticky rice and because it was billed as a ‘meal’, it included a steaming bowl of tasty miso soup and some pickles. Exactly what we needed to warm ourselves up from the inside! 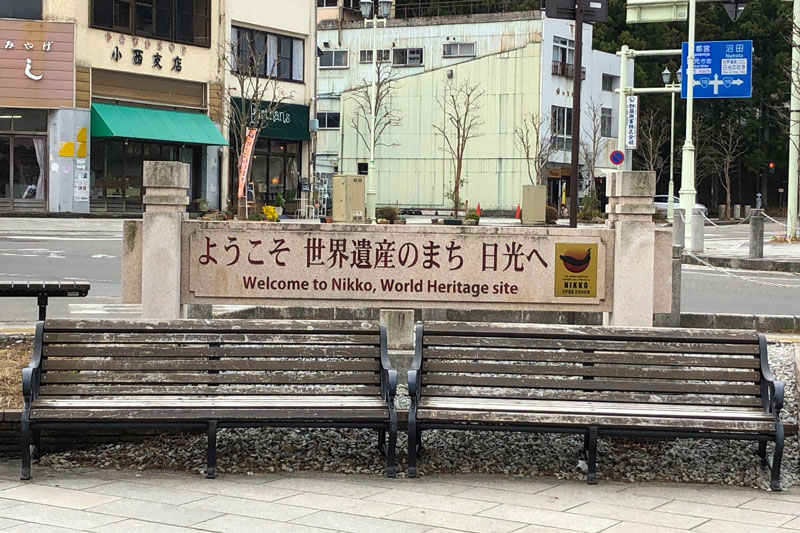 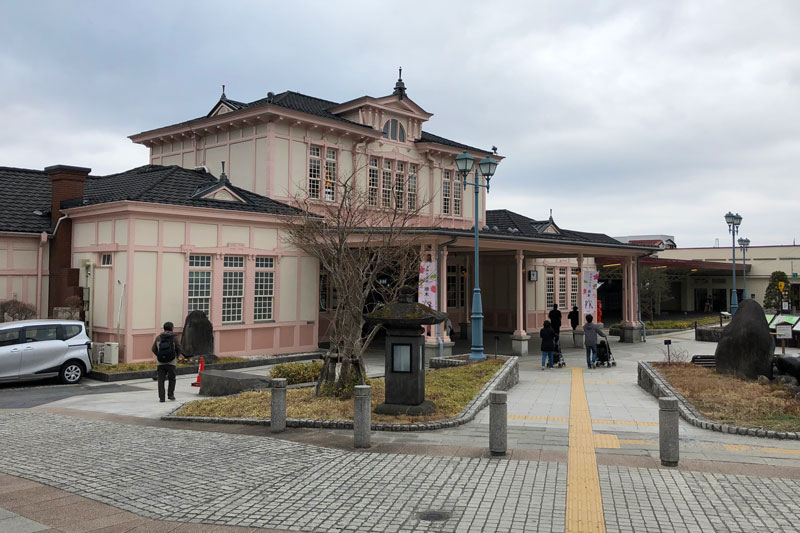 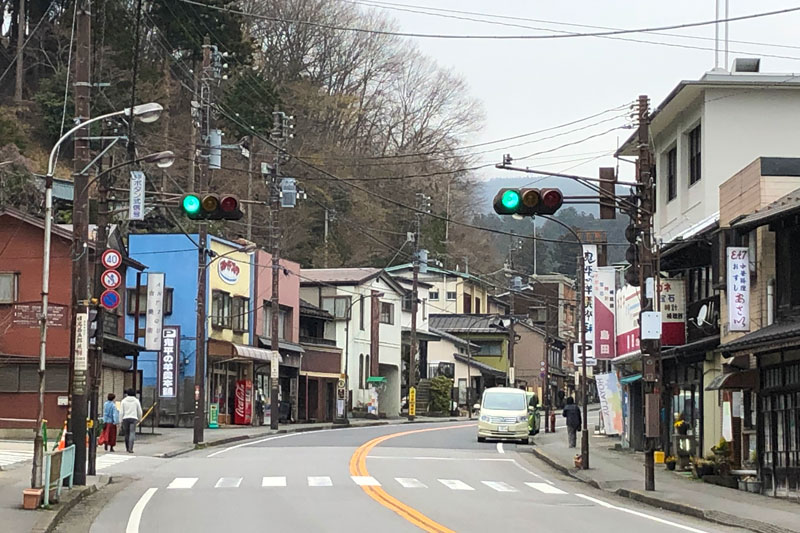 After lunch we eventually got the hang of the bus system and were successfully deposited a few minutes away from our Ryokan – Natsukashiya Fuwari. As it was after 3pm, we were able to check in.

Staying at a ryokan was a unique experience we were looking forward to. It’s very different from staying at a hotel though. Being used to checking in and collapsing immediately onto the enormous king-sized bed was not going to happen here. In fact, traditional Japanese-style ryokan rooms have very little furniture and when we were shown our room all we had was a low central table and some traditional cushions on a tatami mat. No bed!

It’s a bit disconcerting but makes up for it by being beautifully minimalistic and charming with its wood and paper sliding doors. One of the few blossoming cherry trees was right outside our window!

We decided to get going again and make the most of our afternoon. 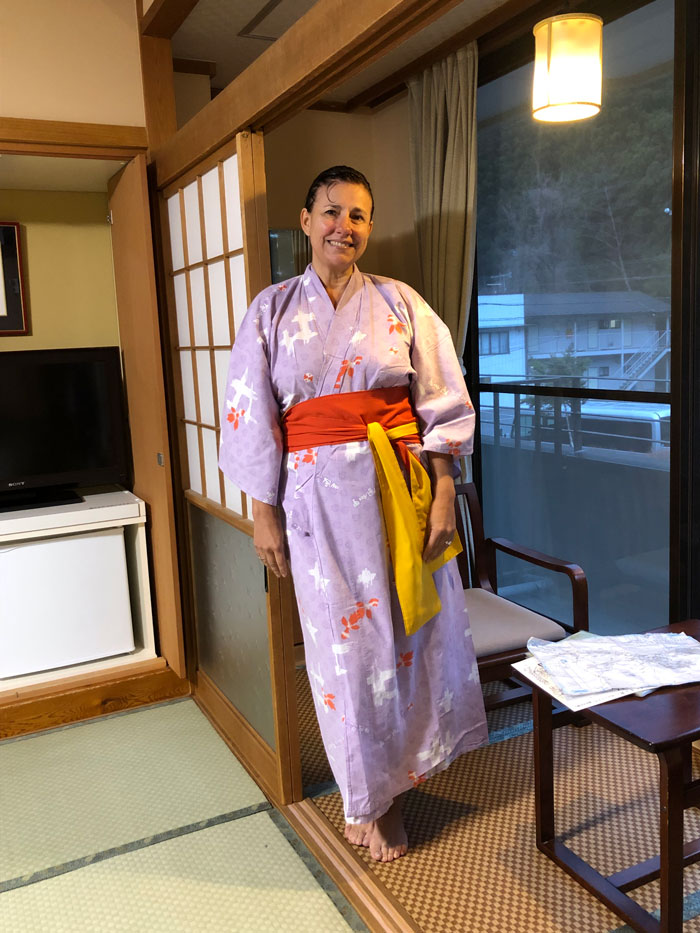 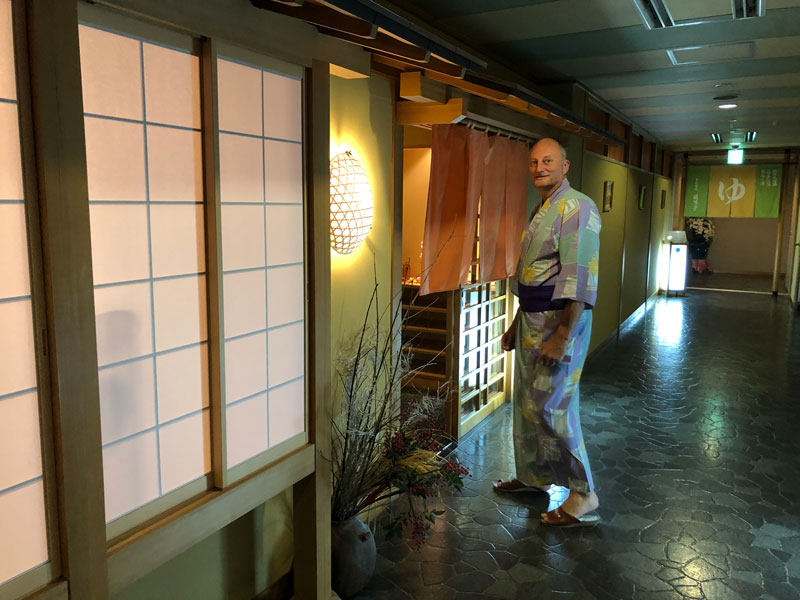 Kanmangafuchi Abyss was a short stroll down the hill from our Ryokan. After a peaceful 15 minute walk that takes you through a quaint residential area of traditional houses, over a small bridge, you reach the trail along a beautiful river with rows of Buddhist ‘Jizo’ statues, who are regarded to be the protectors of children. They are draped in red hats and scarves that are put there by mothers and pregnant women to bless the wellbeing of their children. It is quite eerie and completely beautiful. Most awesome of all, we were probably one of two or three other couples so it was fantastically peaceful.

The stone statues are called Bakejizo, “ghost jizo”, because it’s said that walking into and out of the abyss, you cannot count the same number of them both ways. I didn’t even try to count them as there seemed to be hundreds!

The statues face the abyss, which was formed thousands of years ago by the eruption of a nearby volcano. The lava would have flowed into the gorge and created the smooth grey rocks which now contrast beautifully against the azure water and surrounding green forest.

It seems this time the cherry blossoms weren’t on our side. We could see the buds just about to break open, but I think we were a week too early to see them in their splendour. 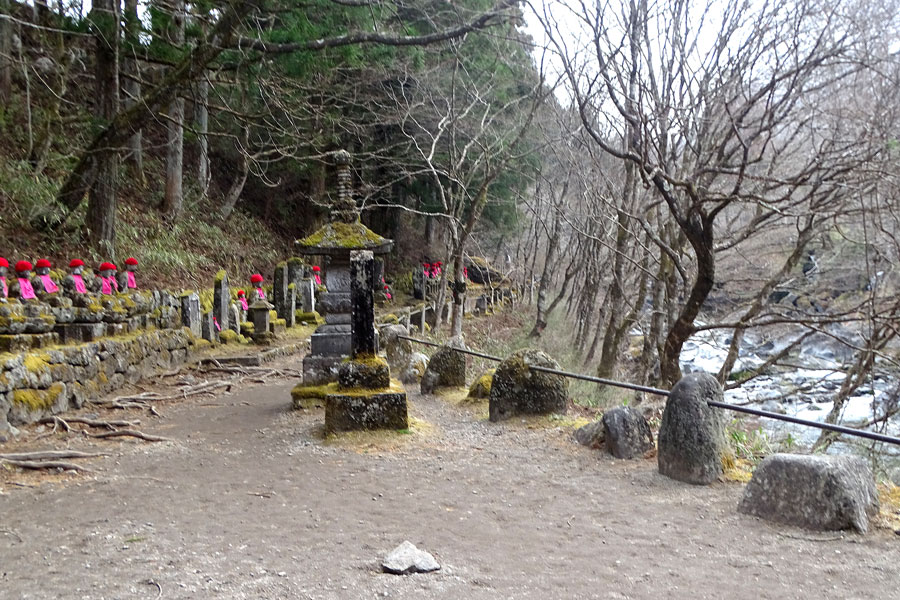 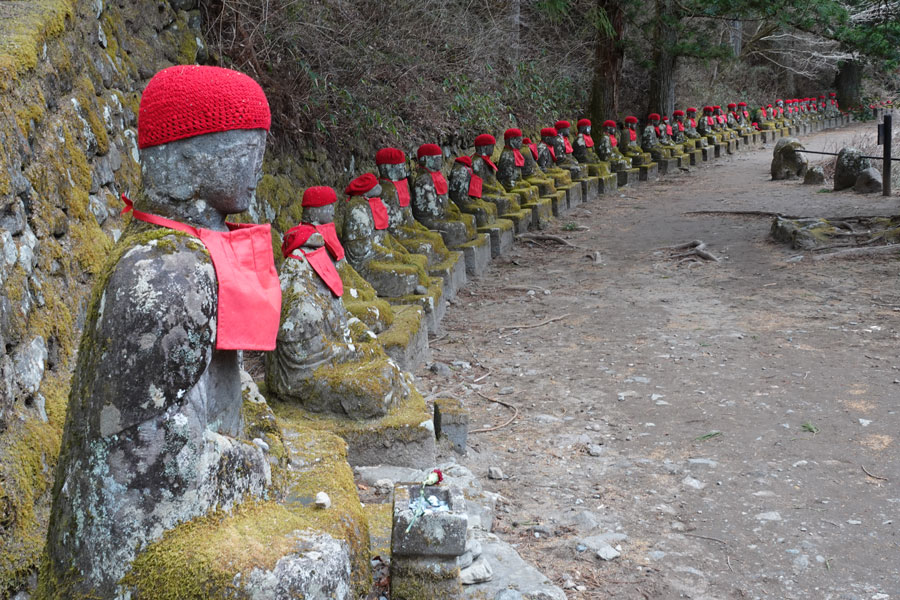 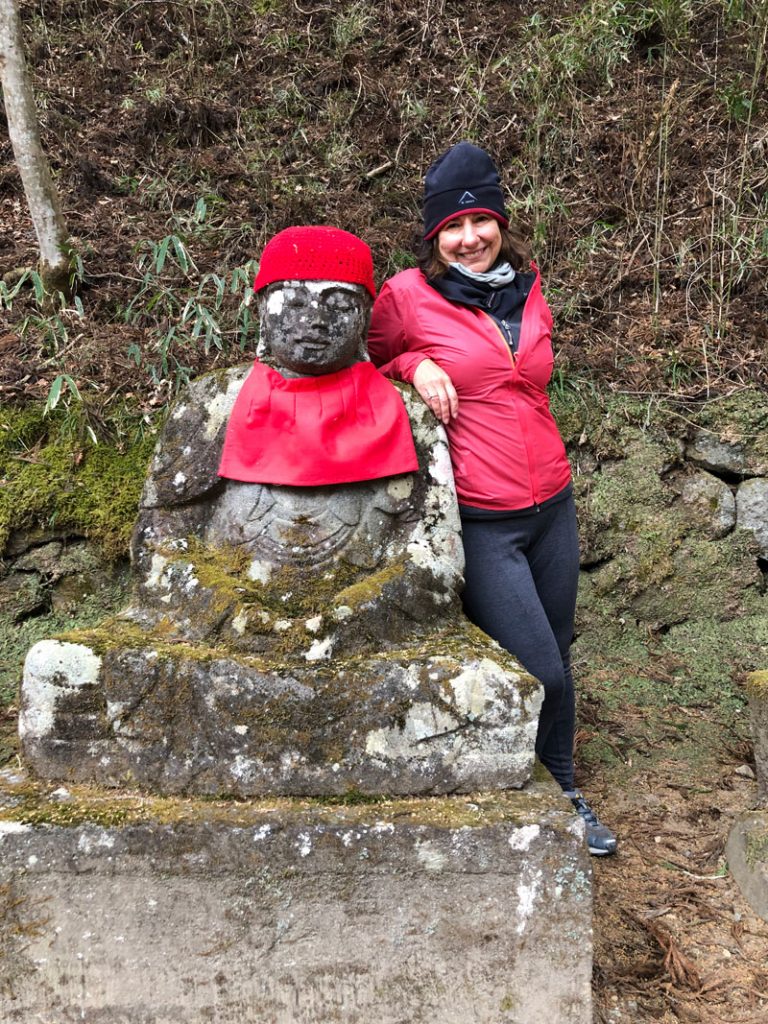 Heading back towards the main road, we came across the entrance to a cemetery. The main path goes through a large wooden gate, and it is flanked on both sides by smaller shrines and statues. The striking thing about this graveyard is firstly that it is so old, having been established in the 17th century. Secondly, the sign explained that these were the Graves of Self-Immolation.

According to the Nikko Historical Walking map we used, there are 24 gravestones.  Five of those who died were retainers of the 3rd Tokugawa Iemitsu Shogun.  The other 19 were “vassals who devoted themselves to the Tokugawa shogunate.”  They died on April 20, 1651.  It’s a grim tale, I know, but it’s a gorgeous, enchanting place, with innumerable shades of green. Peaceful and maybe a touch spooky. You can read more about our visit to this burial site and other Japanese gravesites here. 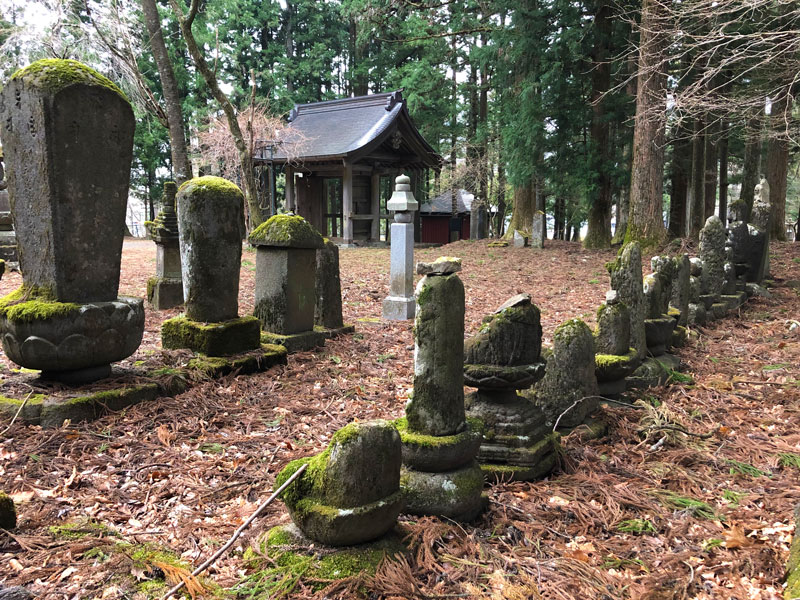 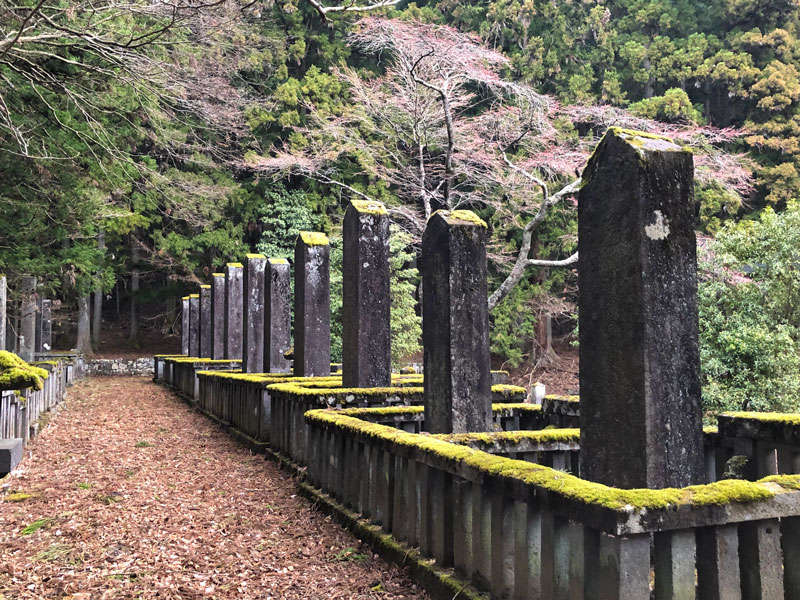 We got back to our Ryokan with time to try the ‘onsen’ or hot spring bath.

I was very apprehensive about the fact that these onsen are a) public, and b) require you to be naked. 🙊 Men and women have separate bathing areas.

We showered and then slipped on our ‘yukata’ – a Kimono-style robe 👘 – and slippers. The spa area was tricky to find. All the rooms are hidden with exactly the same sliding doors and masked with a short curtain of gauzy fabric.

I was relieved to find that there were no other takers and had the spring to myself. I used the beautiful outdoor facility which meant I could smell the cool pine air while being deliciously warm inside the bubbling spring. Just what the doctor ordered after a tough day of walking! 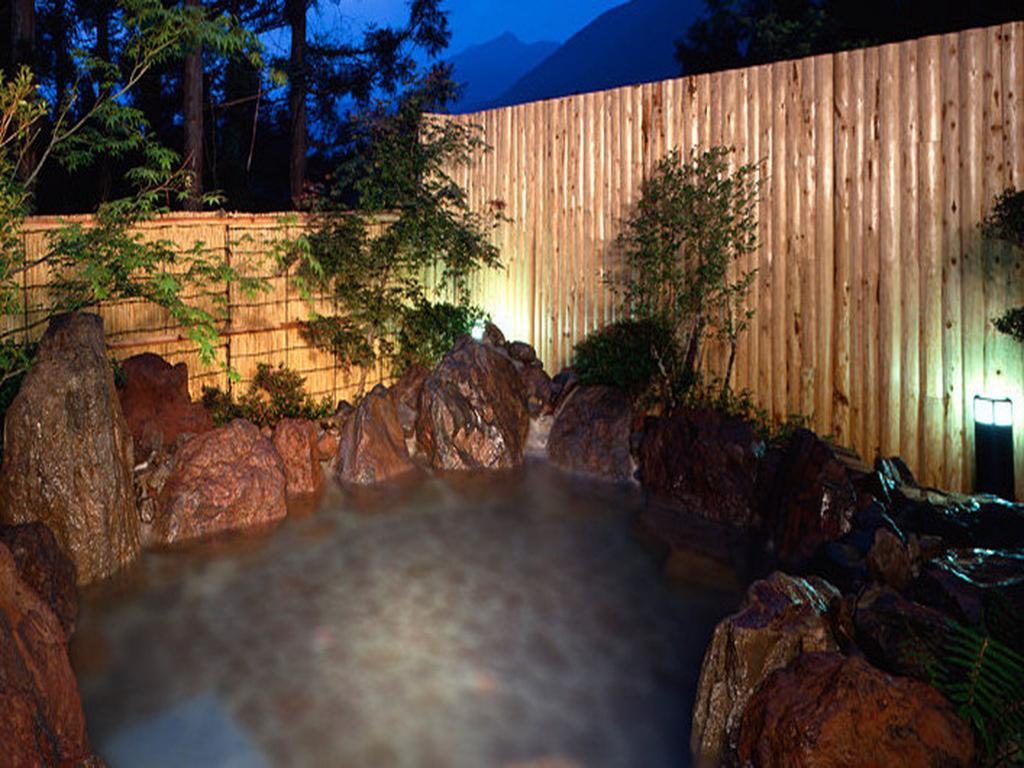 Tattoos are not usually permitted at a Ryokan or onsen. Tattoos are seen as a symbol of the Japanese underworld. As such, many onsen have regulations that prevent people with tattoos from entering. While this doesn’t always apply to non-Japanese, if you have a tattoo and another guest complains, you may be asked to leave the bath. Offenders are required to cover the tattoo with a band-aid or large bandage or to select a ryokan that offers private onsen.

Dinner time at 6h30 is strictly enforced. It felt most peculiar entering the dining area wearing a gown. We sat at a low table and were relieved to discover that the floor below was hollow so your legs could slide into the pit and you would not have to sit uncomfortably cross-legged. Then followed a multi-course ‘kaiseki’ dinner featuring seasonal local ingredients. What an experience. Most of the time we had no idea of what we were eating. Our hostess chatted away in Japanese explaining at length whenever she brought various courses. We smiled and bowed politely. She corrected us on occasion when she saw that we were being particularly clueless by adding ingredients to the pan on our burner herself, or urging us to eat one thing ahead of something else. A memorable evening rounded off with green tea and warm saké.

When we got back to our room, our table had been moved and futon bedding had been laid out on the tatami mats. A bit hard on the old hip bones, but we slept like babies anyhow. 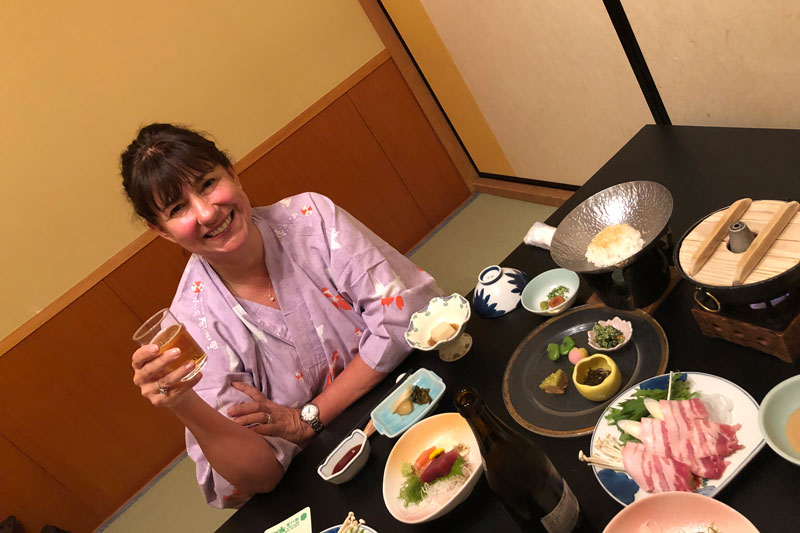 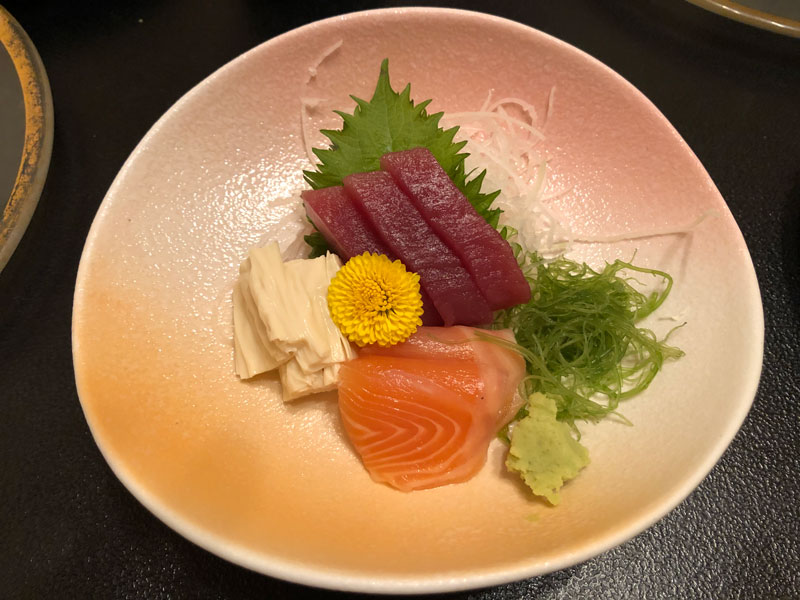 Breakfast was another colourful feast. We found it a superb way to sample Japanese foods that we may never get to experience again. Breakfast consisted of a selection of traditional Japanese dishes – fish, rice, miso soup – as well an egg and of course, tea. Well those were things we could identify!

Despite the fact that our hotel manager assured us that it wouldn’t snow in Nikko at this time of the year, as we made our quick dash for the bus and train it began to snow lightly much to our delight and we headed off for our next adventure – the Nakasendo Way and our next overnight stop, Narai.