Nothing excites the imagination quite like the discovery of a lost city. Cambodia is synonymous with the temples of the UNESCO World Heritage Site – Angkor –  the world’s largest (and best preserved) religious complex. The extensive and important city was built in the 12th century and lay swallowed up by the jungle for hundreds of years after the decline of the mighty Khmer Empire. It seems it was only rediscovered again in the 17th century.

Today Angkor’s vast metropolis of thousand-year-old temples includes the well-preserved Angkor Wat (the main temple), as well as Angkor Thom, the Bayon Temple, and many other smaller temples, such as Ta Prohm, now fondly known as the ‘Tomb Raider Temple’.

We flew Singapore Air to Siem Reap from Johannesburg (via Singapore). We were lucky enough to stay at the beautiful French-Colonial Raffles Grand Hotel d’Angor. The hotel is rich in Cambodian history and has some original treasures on display right down to a raised portico and the original wrought-iron working cage elevator in the lobby. It has gorgeous claw-footed bath tubs, black and white marble floors and a beautiful swimming pool. The doorman, royally dressed, welcomes you with a “Bonjour Madame”.

We decided to begin with the Bayon Temple and took a tuk tuk to Angor Thom. Angkor Thom is a 3km square, walled and moated royal city and was the last capital of the Angkorian empire at the end of the 12th century. 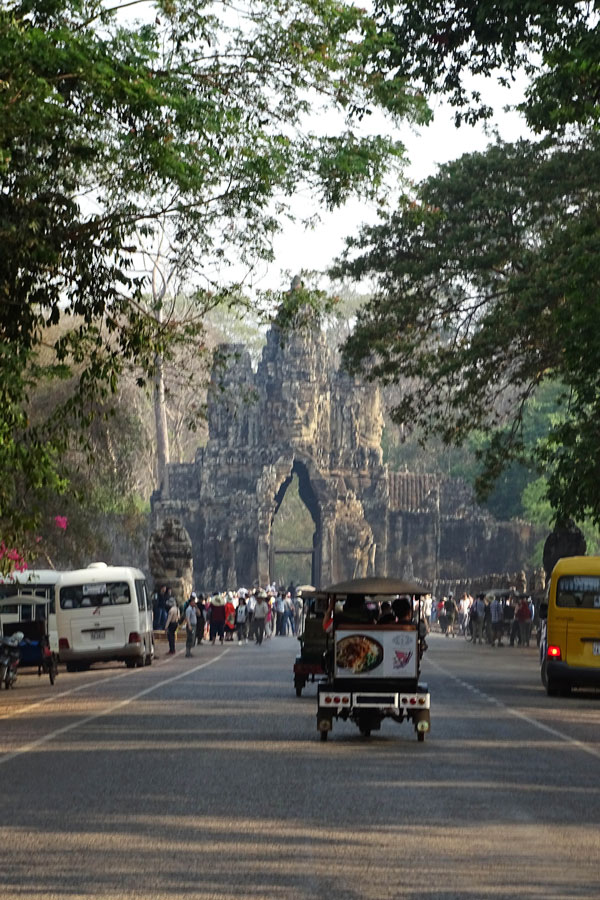 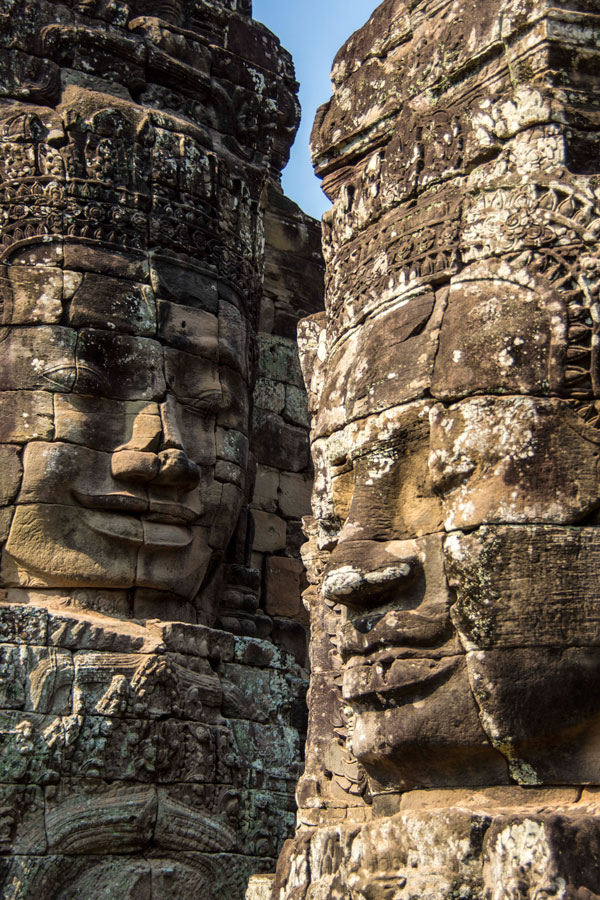 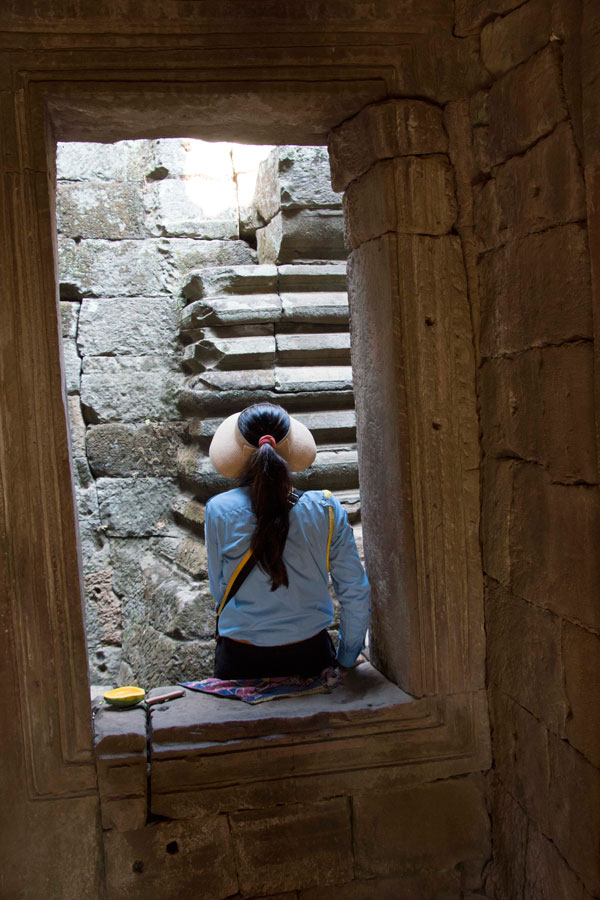 At the heart of Angkor Thom is the Bayon temple of Jayavarman VII. Its 54 Gothic towers are carved with over 200 smiling faces of Avalokiteshvara (a manifestation of Buddha) 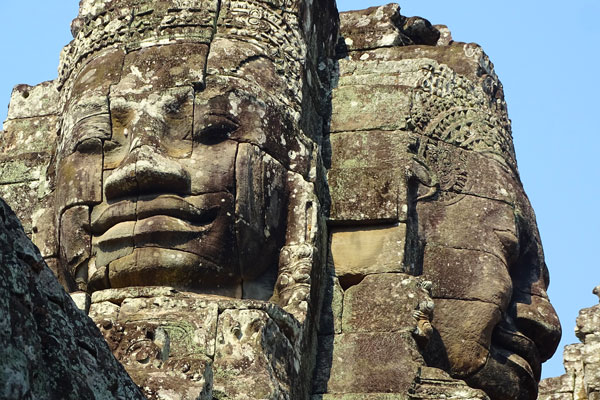 We entered through Angor Thom South Gate (one of five main gates) crossing over the moat. We stopped first to admire the carved figures flanking the bridge. On one side a row of gods, and on the other demons, expressing welcome or grimace respectively as they observe your approach. 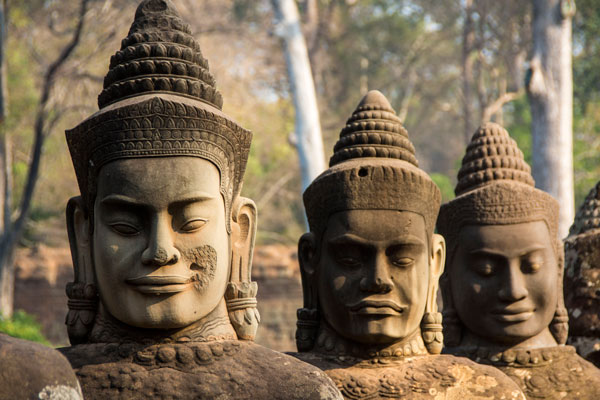 Cambodia is seriously HOT. We had to pace ourselves carefully and drink lots of water to ensure that we didn’t get too exhausted. Climbing around temples in the warmest season (March-May) where temperatures average above 35 degrees takes both mental and physical effort. 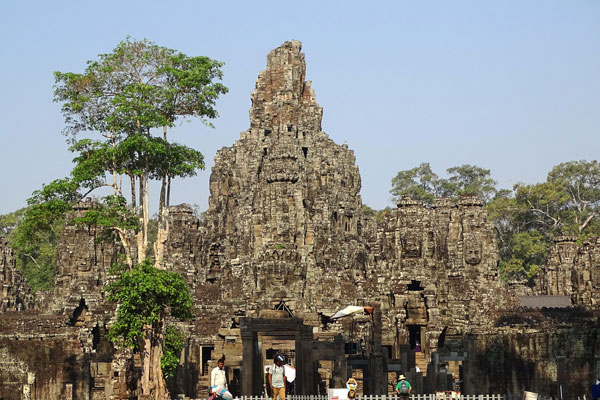 Bayon was awesome! We loved the intricately carved faces that made the temple unlike any other I’d ever seen, leaving you with a sense of well-being and positivity. We spent ages taking photographs and walking around inside and out. 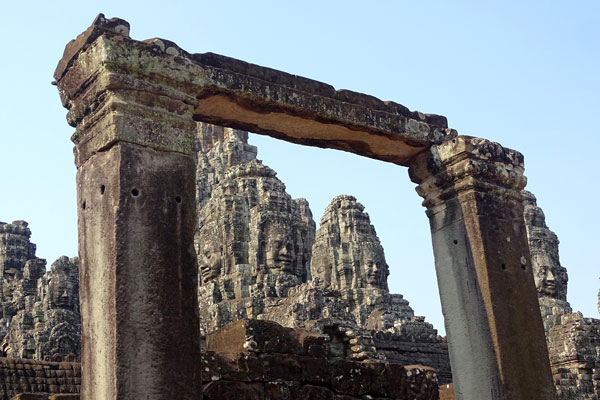 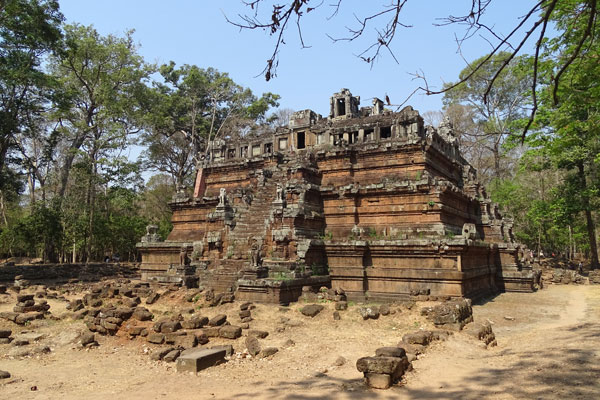 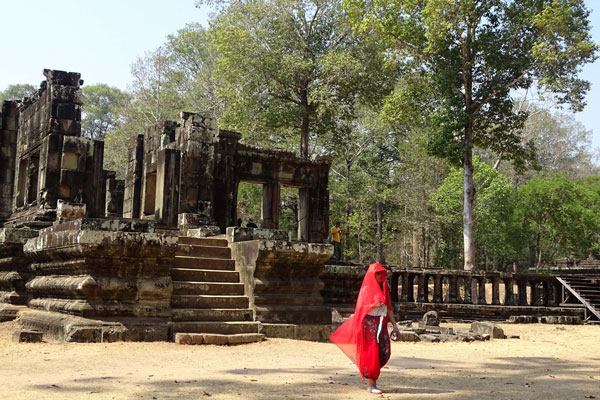 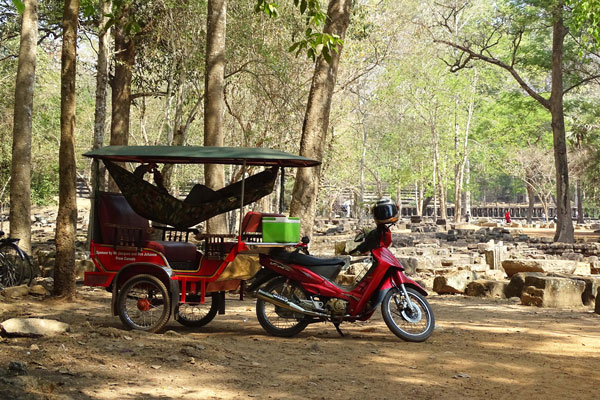 In the afternoon we again took a tuk tuk and headed off to Ta Prohm.
When Angkor was rediscovered in the early 20th century by French archaeologists, all of the temples had become overgrown and reabsorbed by the jungle. Ta Prohm was virtually swallowed. It has been restored to be safe for visitors and to ensure that the structures aren’t damaged any further. 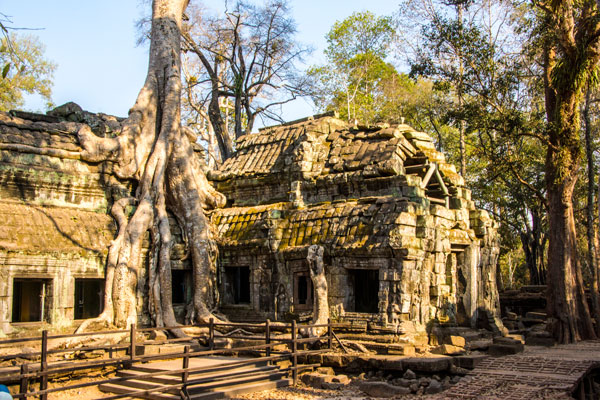 Ta Prohm in late afternoon sunlight was golden and mysterious in the dappled shadows of the enormous trees and giant choking roots. Some of the passages were impassable, others required that you clamber over crumbled pillars, canopies of tree trunks and snaking root systems. It was undeniably atmospheric. 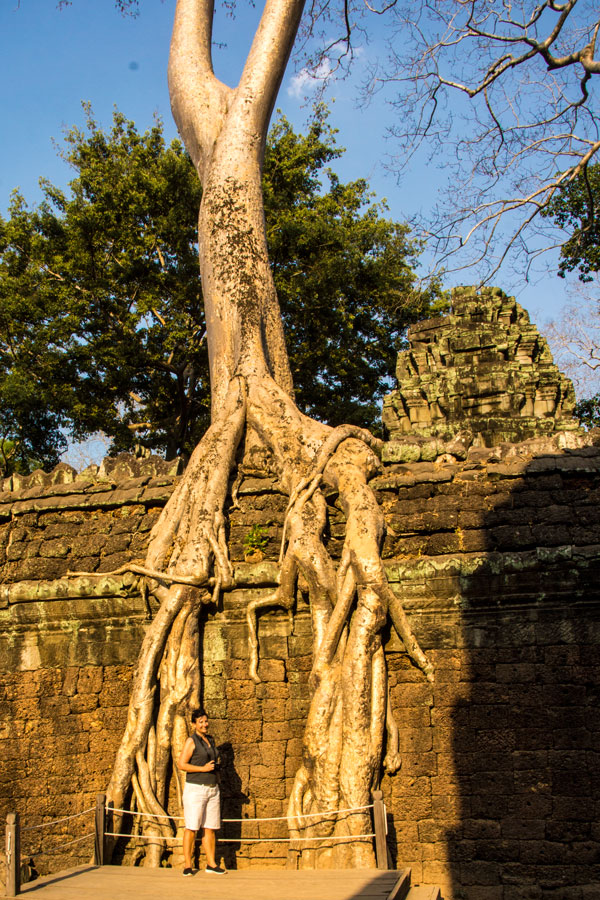 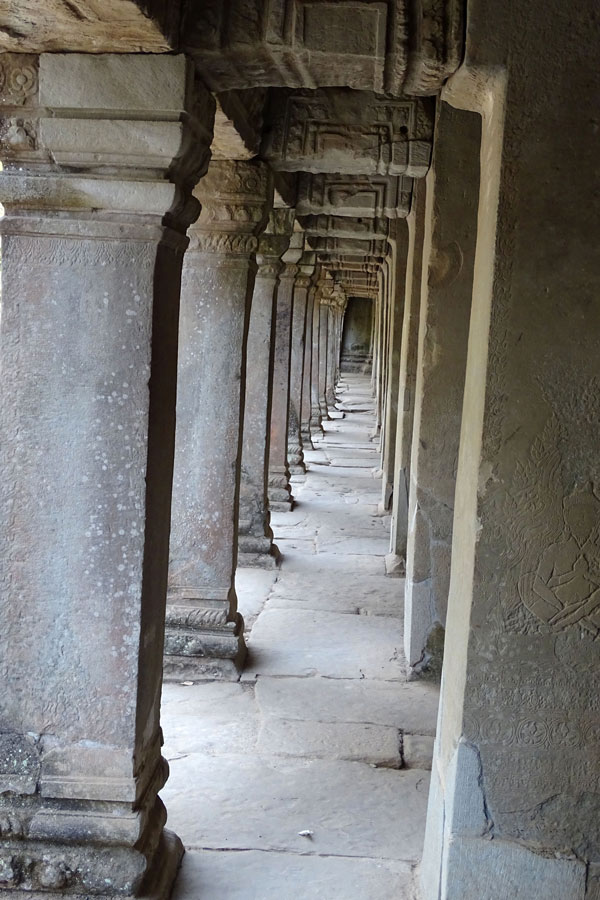 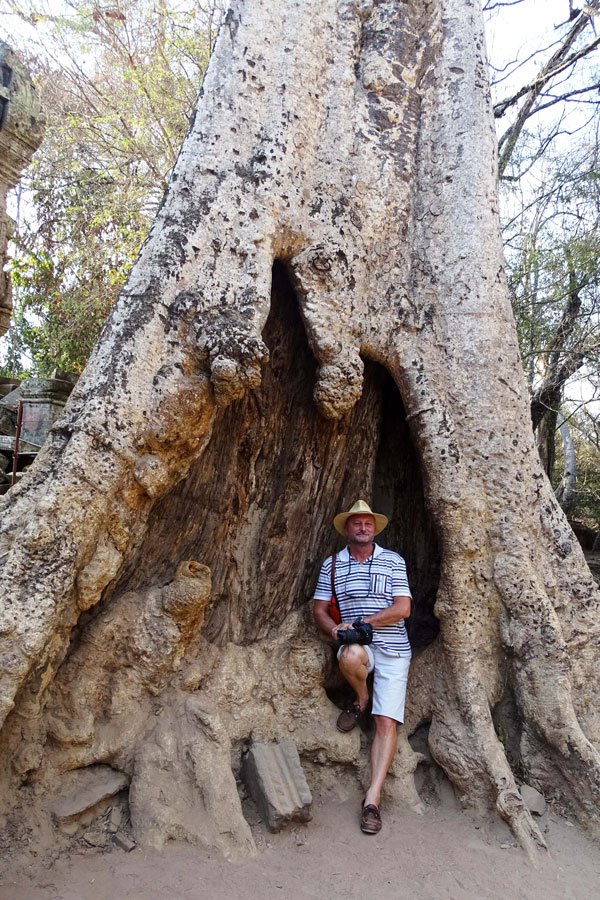 Our tuk tuk driver recommended a quick trip to Phnom Bakheng which is a Hindu and Buddhist temple on a mountain. This site is known for its spectacular sunset views. Dedicated to Shiva, it was built at the end of the 9th century. We climbed the hill quite quickly as the day was fast ending and we were worried about getting to the top ahead of the sunset. We hiked quite a long trail but with beautiful views and because it was slightly cooler, it was a welcome relief from the stifling heat. You have to queue to get a card that then allows you to enter into a holding area, as only 300 people are allowed up at a time. There are lots of tourists but the line moves fairly quickly and we made it in the nick of time. 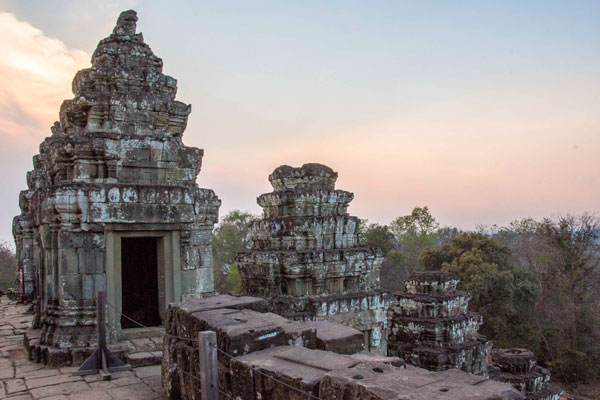 For dinner we headed for the lively and vibrant Pub street. It was crazy busy and a bit overwhelming, but it’s where all the action, restaurants and nightlife was happening. It was Geoff’s birthday and we celebrated with a delicious regional curry and a tasty stir fry, washed down with the local beer. 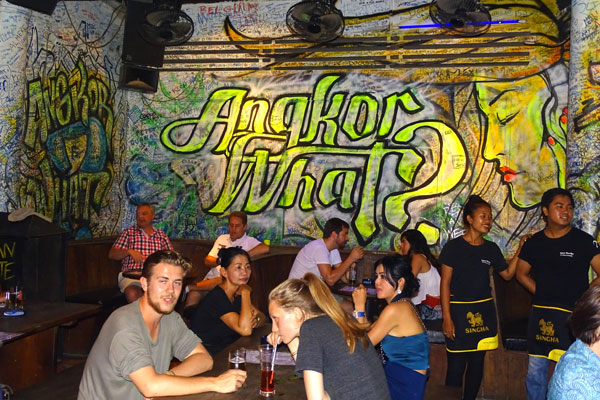 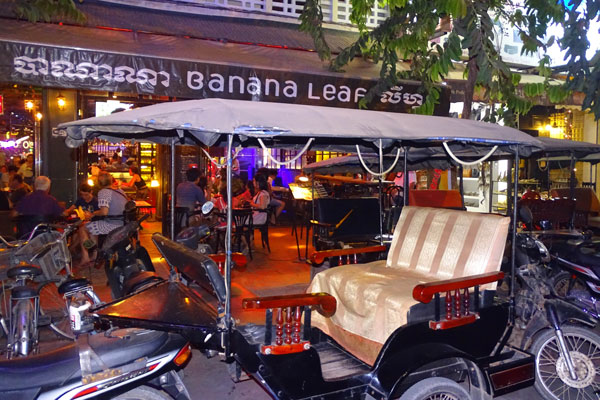 We were up at 4am to watch the sun rise above Angkor Wat, reflecting the famous Khmer architecture onto the lily pond. 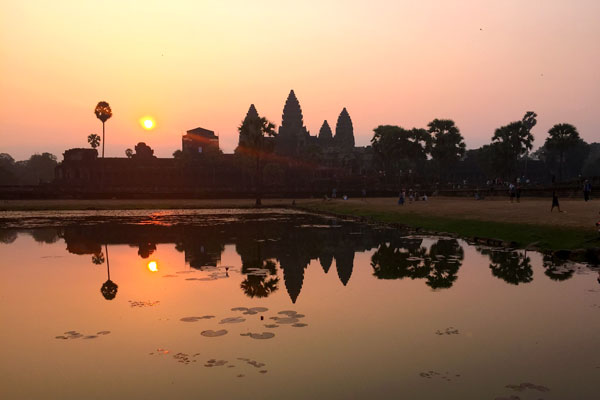 Angkor Wat temple is the largest religious monument in the world, on a site measuring 162.6 hectares (402 acres) with a 5 km moat. The number of people gathering at sunrise is astonishing and yet it was surprisingly quiet despite the crowds and the tripods jostling for prime position. 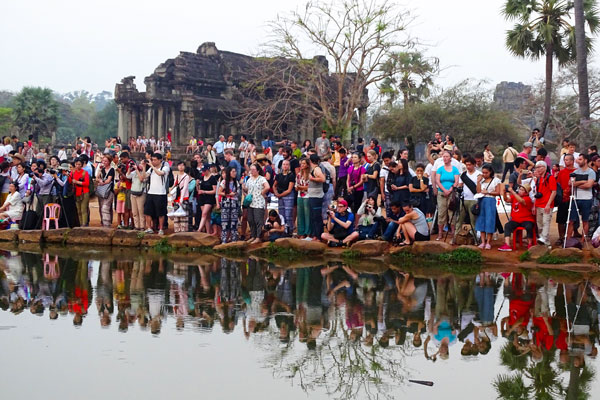 The skies were clear so we didn’t get a dramatic sunrise, but it was still beautiful to be there and to observe the light spreading over the turrets. We then spent some time climbing up and visiting the terraces, pillars, towers and galleries of the temple itself. 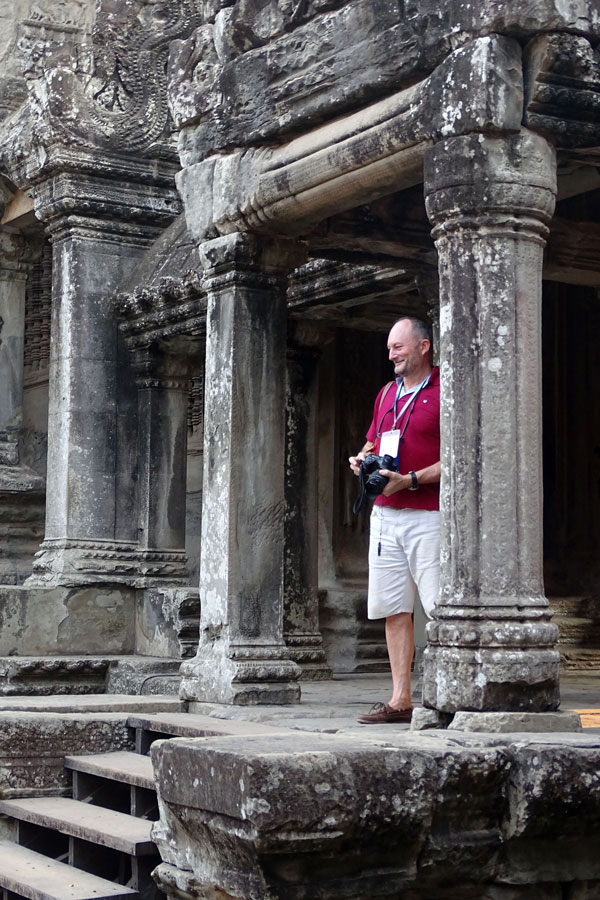 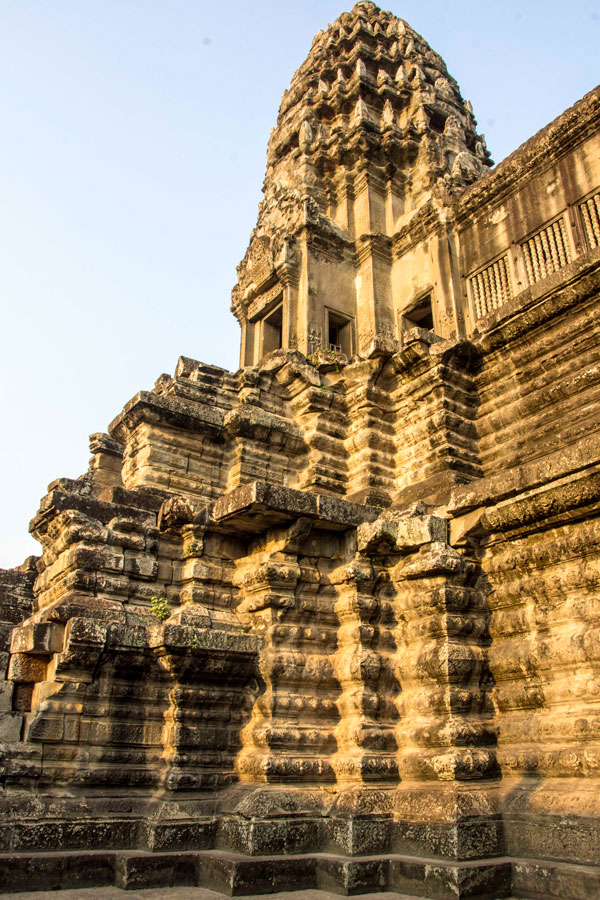 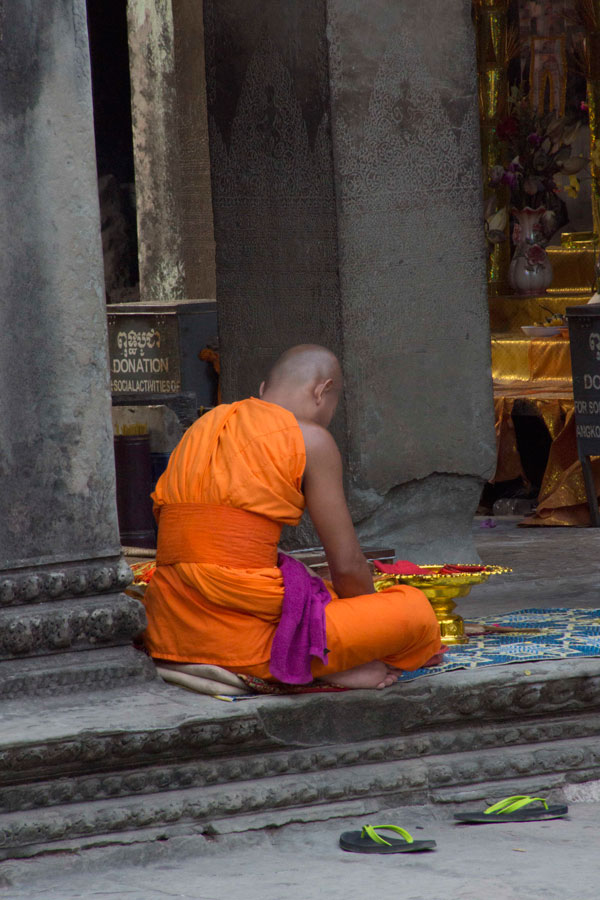 In the afternoon we had booked for a cooking course. The experience starts off with a walking trip around the local meat and vegetable market where we sourced fresh ingredients and learned about the spices and herbs that make Khmer cooking authentic. 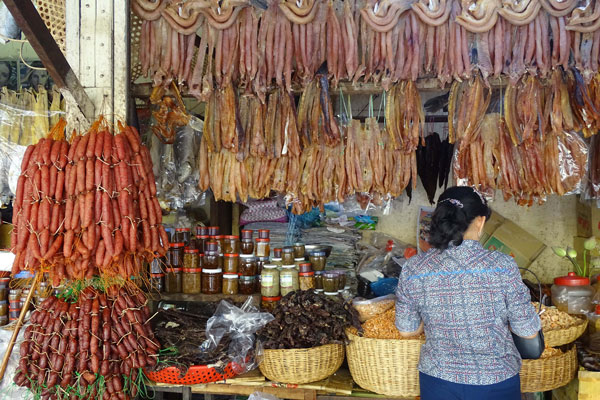 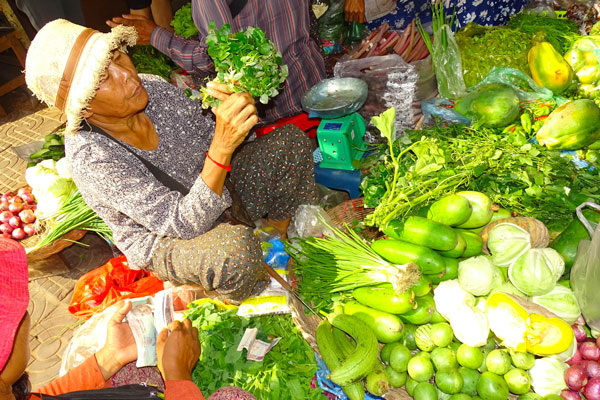 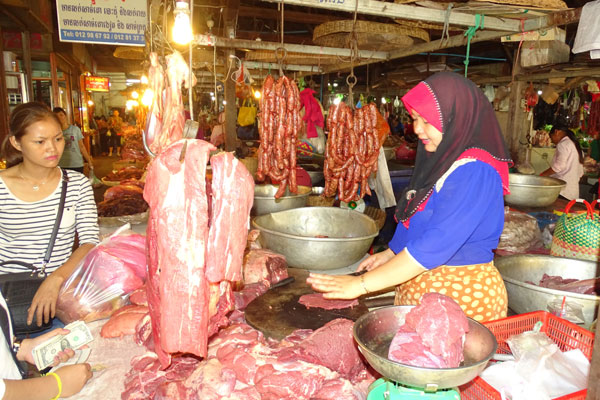 We prepared a delicious yellow curry in coconut milk, rich with turmeric root and fragrant lemongrass as well as a tasty green papaya salad. We also were taught a heavy, sickly cornfloury dessert that neither of us enjoyed much. 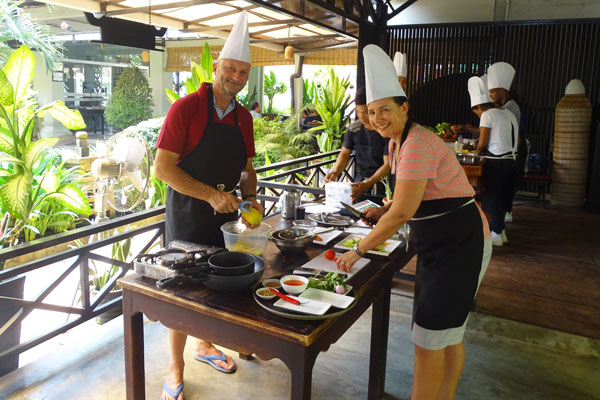 Later, we wandered around the markets and enjoyed the sights and the sounds of the busy city. 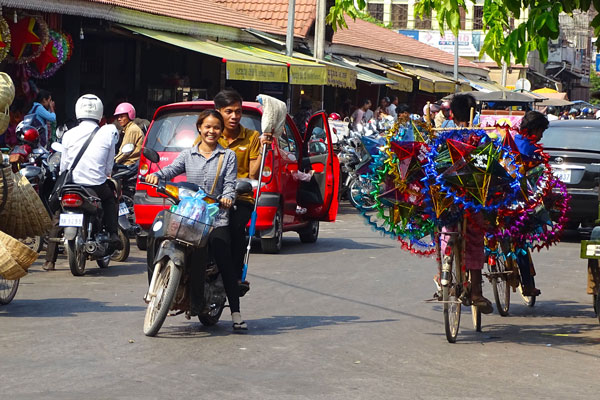 It was a brief visit to a fascinating place and our experiences left us with a sense of awe at the sheer size and extent of the complex of temples. Also to think that laser imagery has revealed that there is still so much more awaiting discovery. It was also sobering to contemplate the puniness of mankind against powerful Mother Nature that had ultimately enveloped and reabsorbed the ancient structures, only for them to be discovered once again. It makes you think about what other mysteries are waiting to be discovered and how determinedly and relentlessly the jungle will take back it’s own if the human race was removed from the equation. 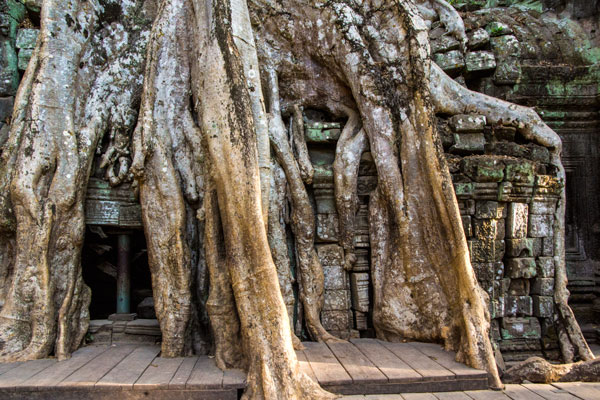