Chicagoans first buried their dead on the banks of the Chicago River until the city began to steadily encroach on the space and concerns were raised about the possibility of disease being spread. Also this riverside land was highly sought after, perhaps better suited to the Lincoln Park of today. For these reasons the graves were disinterred and the remains transferred to other cemeteries, an important one being Graceland.

Built in 1860, Graceland Cemetery is an enormous cemetery on the city’s north side. It’s a beautiful, sculptured park with appropriately weeping willow trees that shroud the tombs and their ghosts. It’s an enormous place and is full of famous Chicagoans. It also houses some of the country’s most interesting and creepiest burial sites. 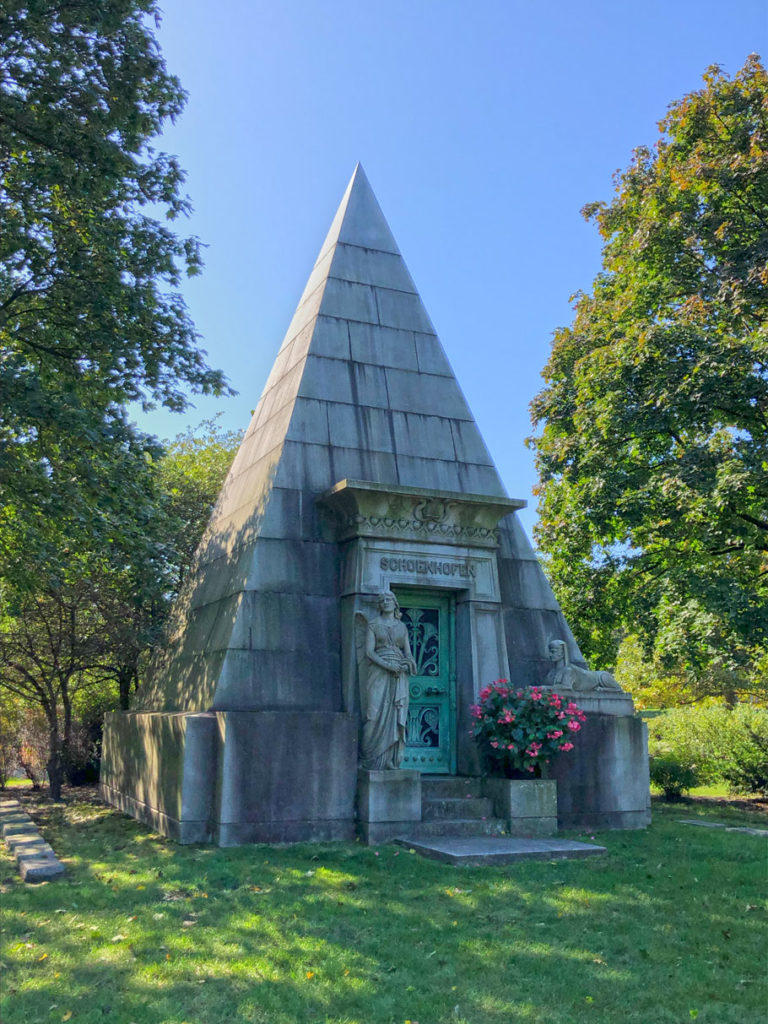 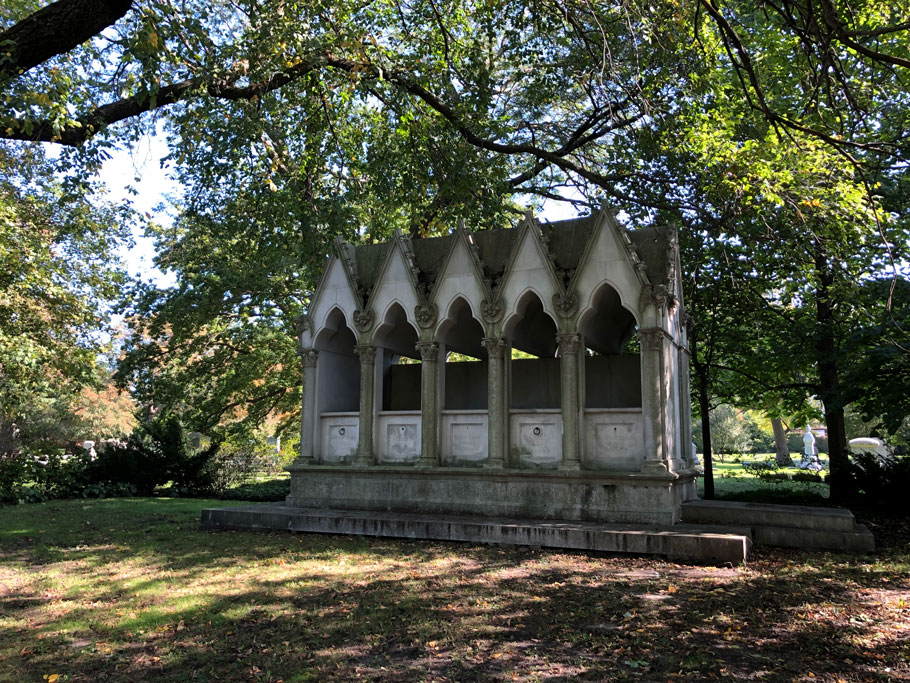 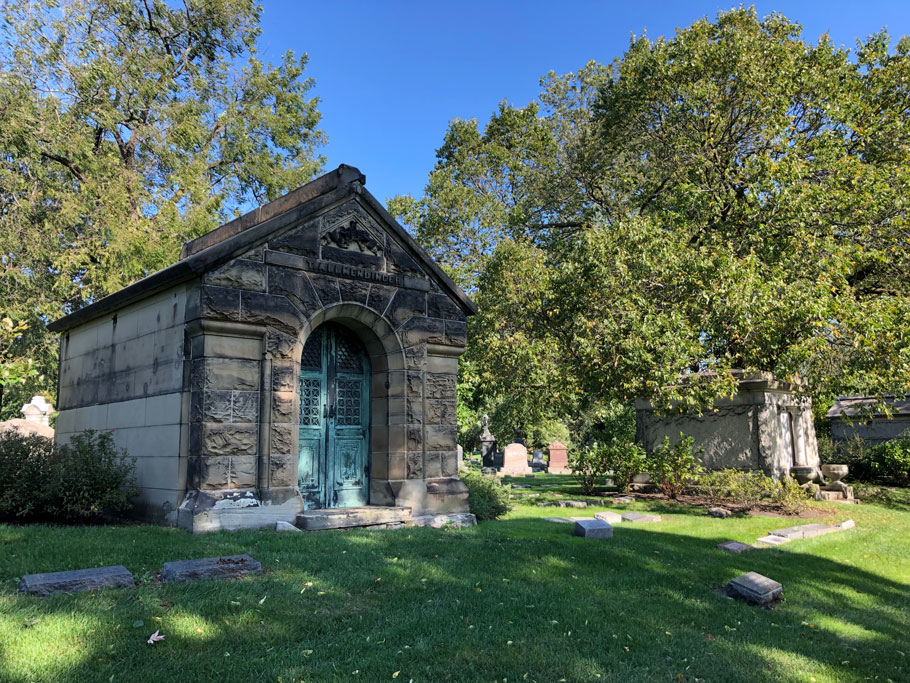 There is something unforgettable about the statue known as “The Eternal Silence”. It’s the kind of statue that you struggle to look away from, even though its dominance is intimidating. Then you read in the brochure that you are given on entering the graveyard that there are many legends surrounding the eerie sculpture, the most famous being that “upon looking into its eyes a person could see the nature of their own death”. Gulp. Well thanks for that.

Designed by famous sculptor Lorado Taft in 1909, it was commisioned by the descendants of Dexter Graves, an original Chicago patriarch who in 1831 led a group of settlers from Ohio to the land that two years later would become Chicago.

I tried to shake of the chilly feeling despite the warm sunshine only to discover further that visitors to the grave have also seen the statue’s uplifted arm being lowered or raised at various times during the day. Ok this is so not cool. Time to move on after a quick photograph.

Oh, and then the brochure goes on to say that bad things happen to anyone who attempts to take a picture of Dexter’s final resting place. According to legend, your camera might break or you will find a blurry photo if you try to capture the monk’s solemn visage. Well, here’s my shot – I’m hoping it’s crystal clear.

This huge mausoleum looks like a Greek temple and is dedicated to wealthy Chicagoans Potter Palmer and his wife Bertha. On my very first visit to Chicago, I stayed in the Palmer House hotel (the longest continuingly operating hotel in North America – apart from a brief Covid shutdown) The original hotel was built as wedding present from Potter to Bertha, a grand society lady, and then it burnt to the ground 13 days later in the Great Chicago Fire. 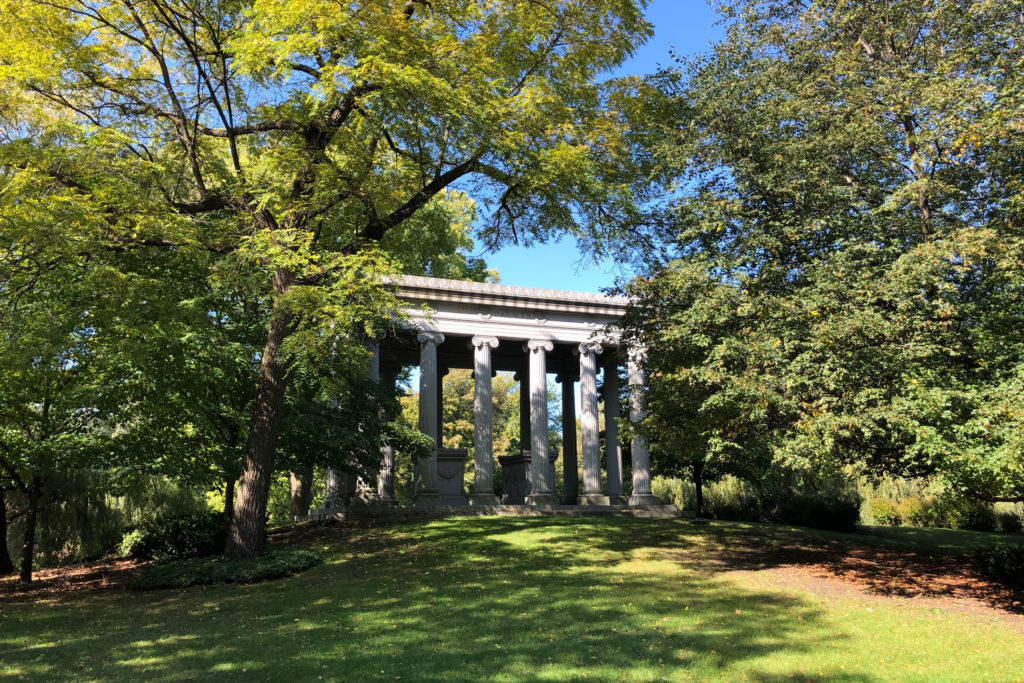 This final resting place of the Palmers is known to fill visitors with dread. It’s been called eerily quiet and is apparently a few degrees colder than the rest of the cemetery. What makes it most creepy I guess is that it was featured in the 1978 Omen sequel, “Damien”, as the Thorn family gravesite.

This is an interesting ghost story. Inez was a 6-year old little girl who was struck by lightning in the late 1800’s while she was on a picnic with her parents. A terrible thunderstorm broke out and she died in front of her parents eyes. Her distraught parents wanted her grave to be a perfect stone replica of their daughter – sitting on a wooden chair, a subtle smile on her face, holding an umbrella in her right hand. A tribute to a life ended too soon. The statue is protected by glass to keep her safe from the storms.

Employees of Graceland swear that the restless soul of Inez might still be present. Some employees have claimed that whenever there is a storm, her statue disappears—leaving only an empty glass box. Visitors have claimed that they hear a little girl crying when they visit. Others have claimed to have briefly glimpsed a small child in 19th-century dress wandering through the cemetery.

After the storm passes the statue mysteriously reappears behind its glass.

People often leave gifts for Inez when they visit her grave.  The 140-year-old image remains in perfect condition thanks to its protection from the elements.

Interestingly, the cemetery itself shows no record of an Inez Clarke actually being buried there. According to their documents, a little boy named Amos Briggs is buried in the plot. It is, however, possible that Inez was buried with her grandparents’ surname, Briggs, with the Amos record being a misread version of Inez? In any case, it would seem that whoever does reside in the grave is not resting quietly… 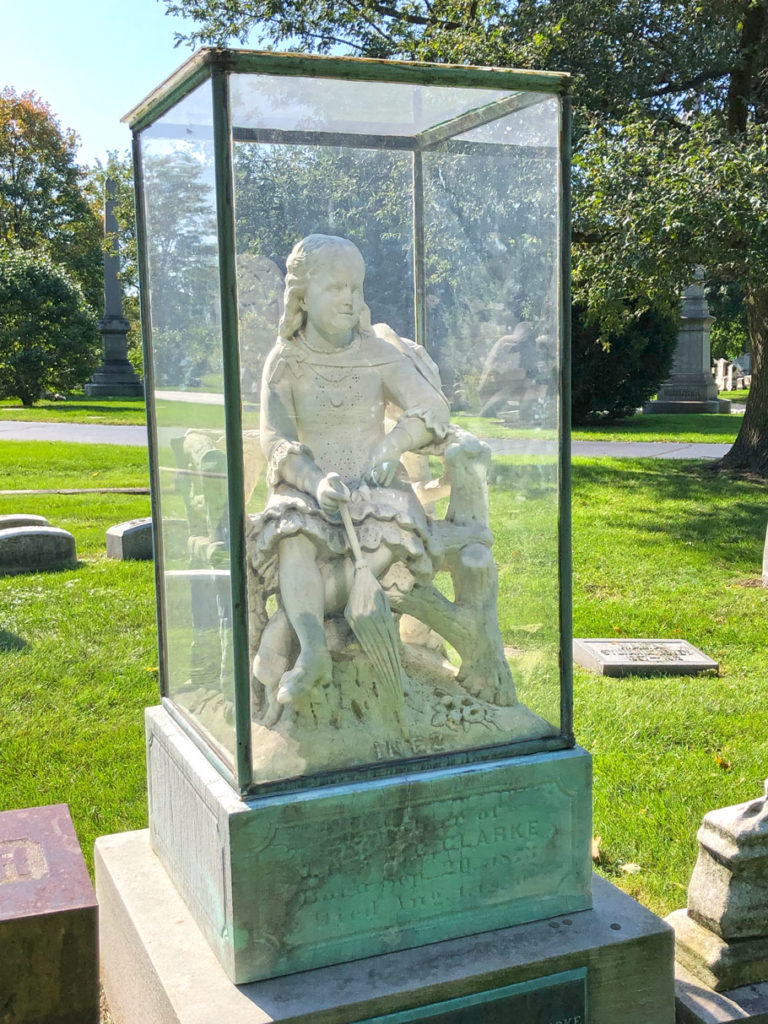 While visiting Chicago we were busy reading Erik Larson’s book “The Devil in the White City” about the incredible events surrounding the 1893 Chicago World’s Fair. Larson tells the stories of two men: Daniel H. Burnham, the architect responsible for the fair’s construction, and H.H. Holmes, a serial killer masquerading as a charming doctor. Burnham is ultimately the famous city planner, who redesigned Chicago after the Great Fire and also created the famous Flatiron building in NYC.

Daniel Burnham’s isolated grave does make you feel uneasy. He is buried on a small island in a pond. It is linked to the rest of the park by a bridge. The grave itself sits under one of those dramatic weeping willows, adding to its loneliness. 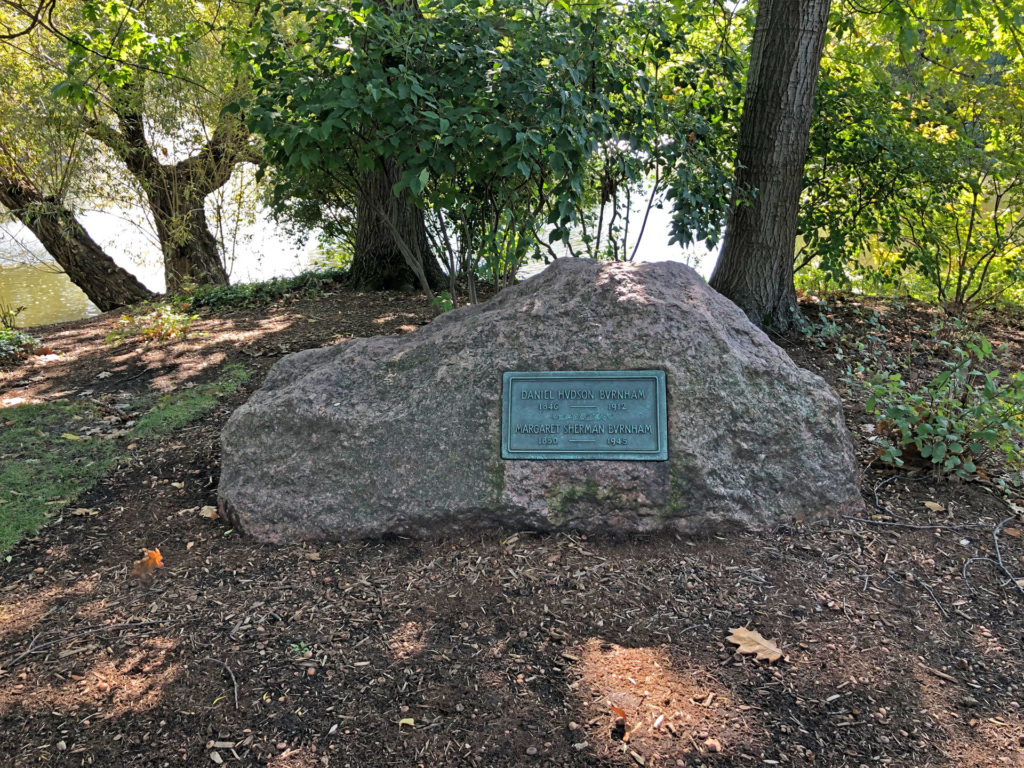 Amidst some of the more sinister odes to death that we explored, it was touching and refreshing to come across the tombstone of Dr Christopher Manuel.

Dr. Manuel, an assistant professor of anaesthesia died of heart failure while riding his bicycle along Lake Michigan. He was only 40 years old and died as recently as 2005.  He was known for his kindness and need to help others.

According to his family, one minute he was on his bike cycling alongside his girlfriend, then suddenly he was on the ground and he died instantly.

Words inscribed on the stone …

this may only be a dream

We come and go like ripples on a stream

“Cemeteries are places that make us reflect upon not just the mortality of those who are buried there, but on our own mortality. These are not scary, creepy places but moving, rich, provocative places, with really powerful and positive meanings.”
Keith Eggener (author of “Cemeteries”) 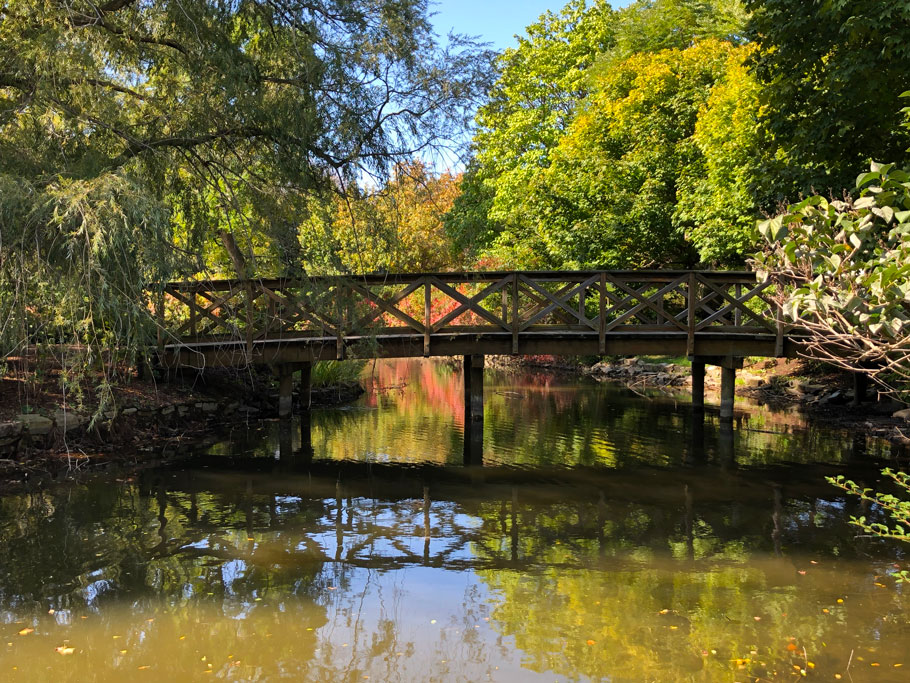