Aveyron and the Gorges du Tarn

We peer up the narrow overgrown yard leading to the ramshackle barn, wondering whether we had finally picked a dud. Fortunately, as we walk up a little further we see that a very narrow portion of the barn has been renovated. 3 stories: kitchen and sitting room downstairs, main bedroom on the 1st floor and second bedroom on the 2nd, both en suite. A perfect pied á terre. The view from the second bedroom window is of the castle walls. 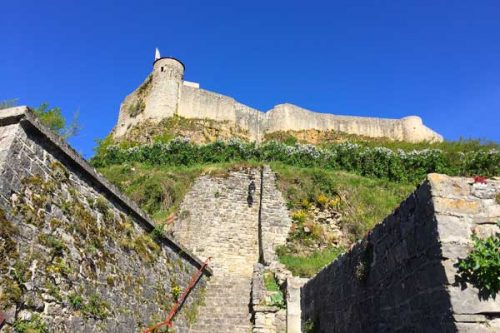 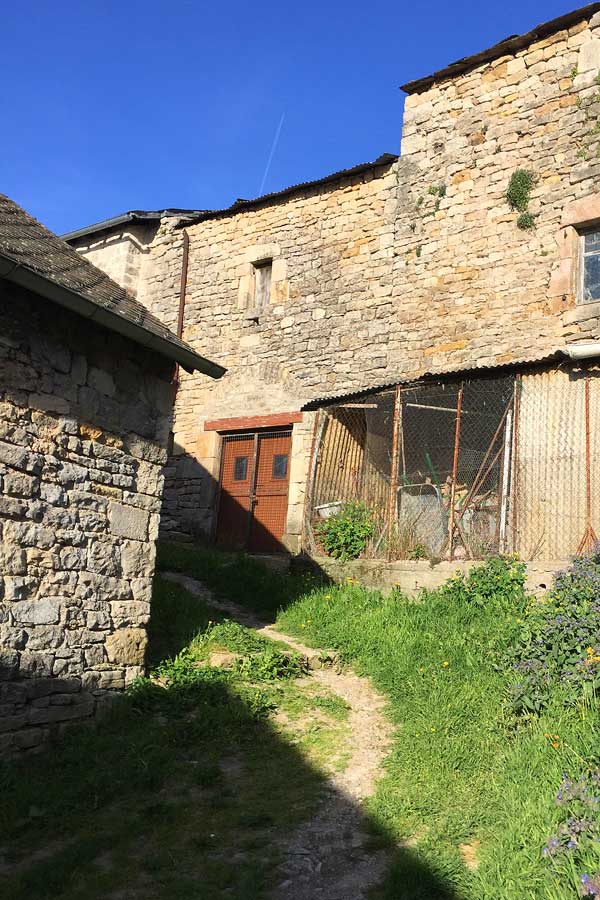 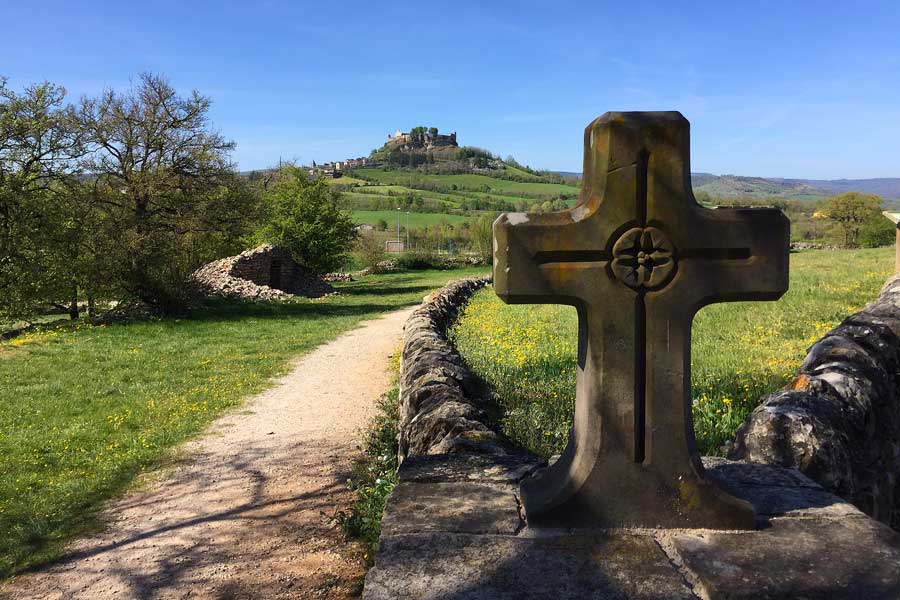 The castle, originally built in the 13th century and added to over the years has fallen in to much disrepair after 2 devastating fires. It provides an amazing 360° view across the countryside. 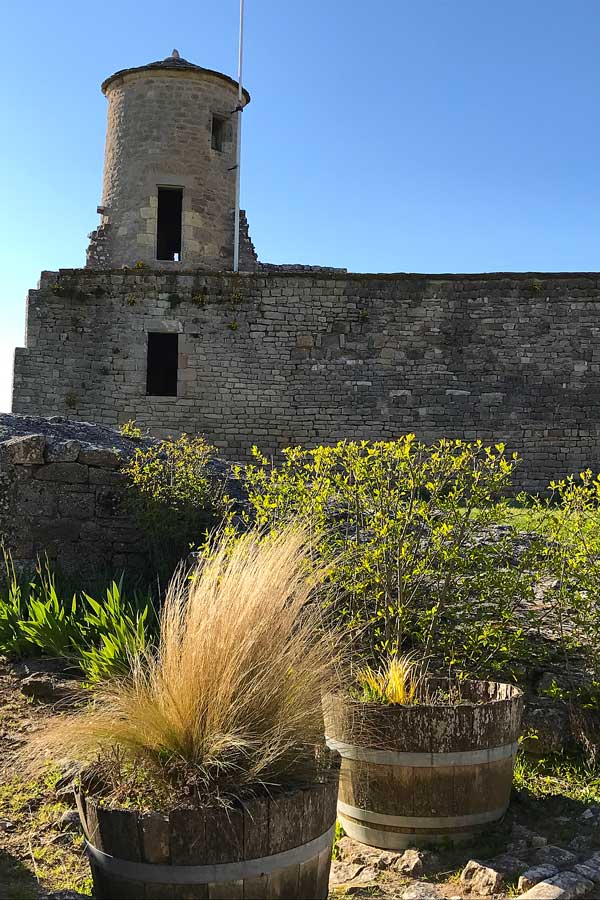 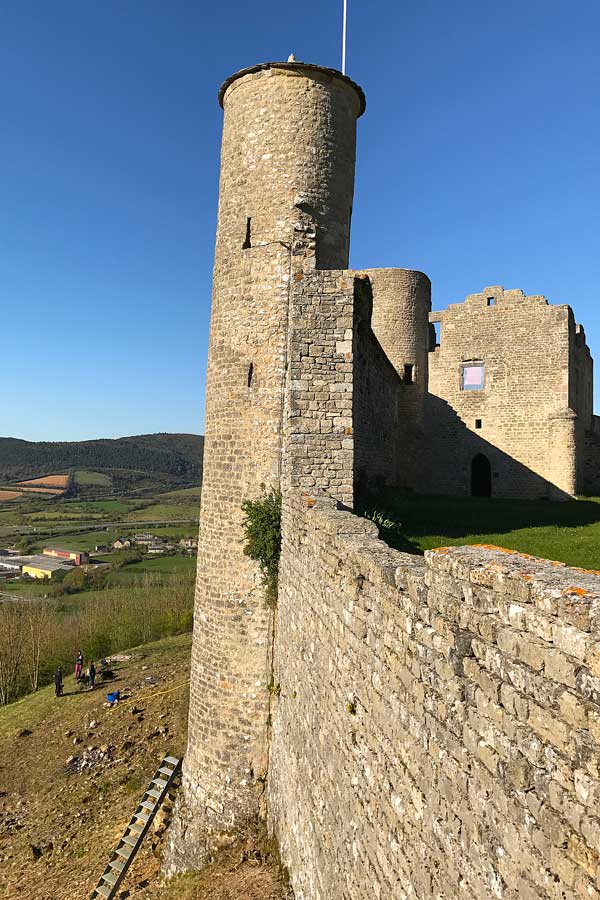 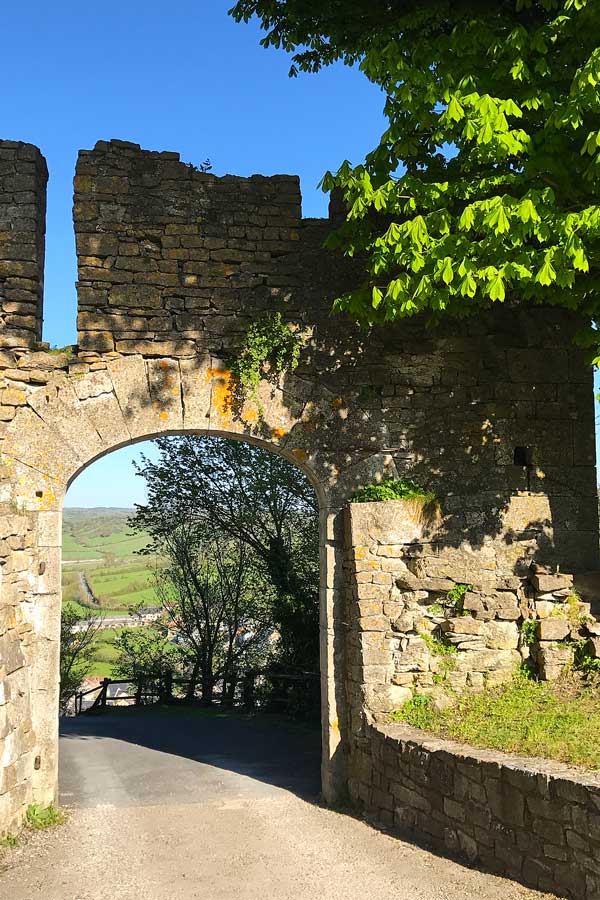 We strolled through the empty streets of the old city spread around the Chateau- between houses, under houses, over houses. Town planning couldn’t have been much of a profession in those days. There are many tumbled-down ruins, but there are also many modern renovations completed and under way. 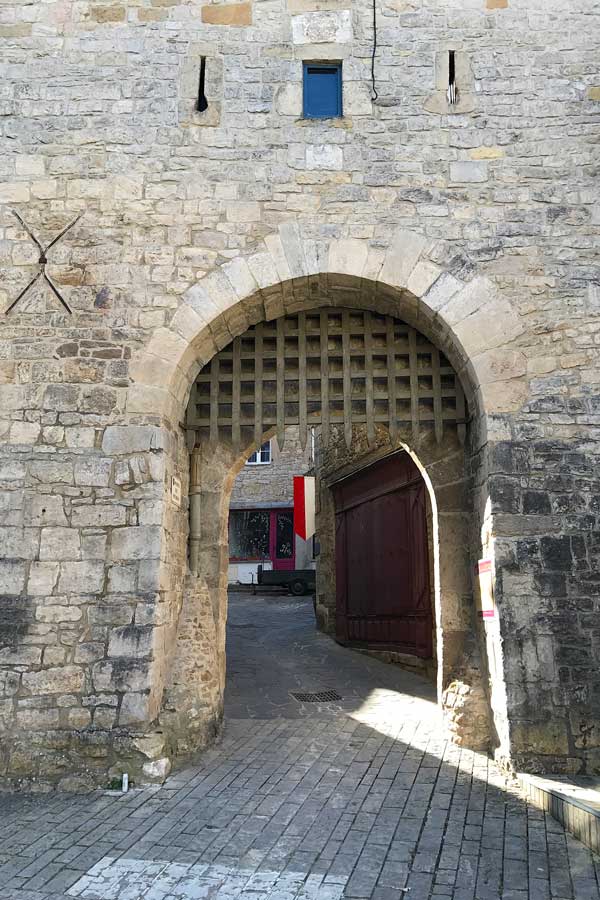 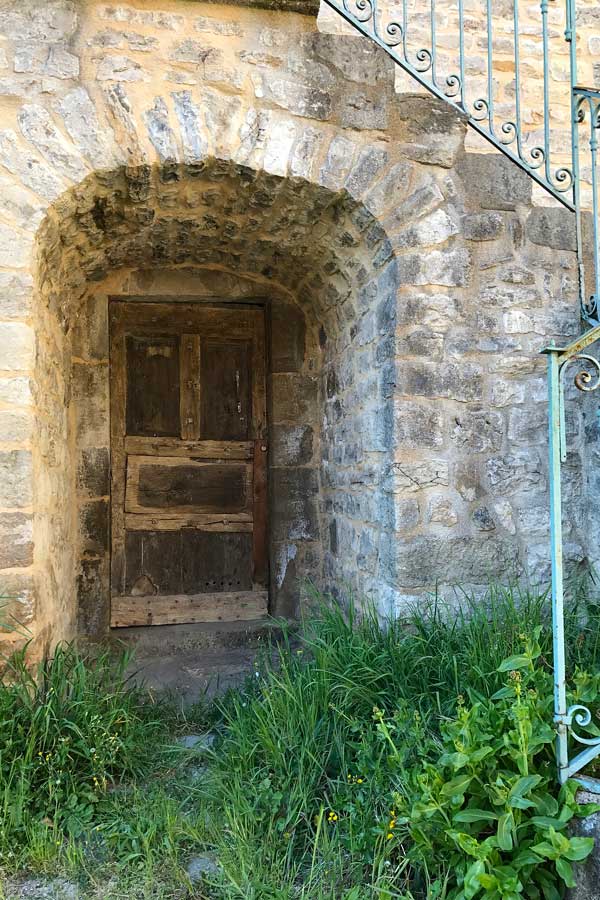 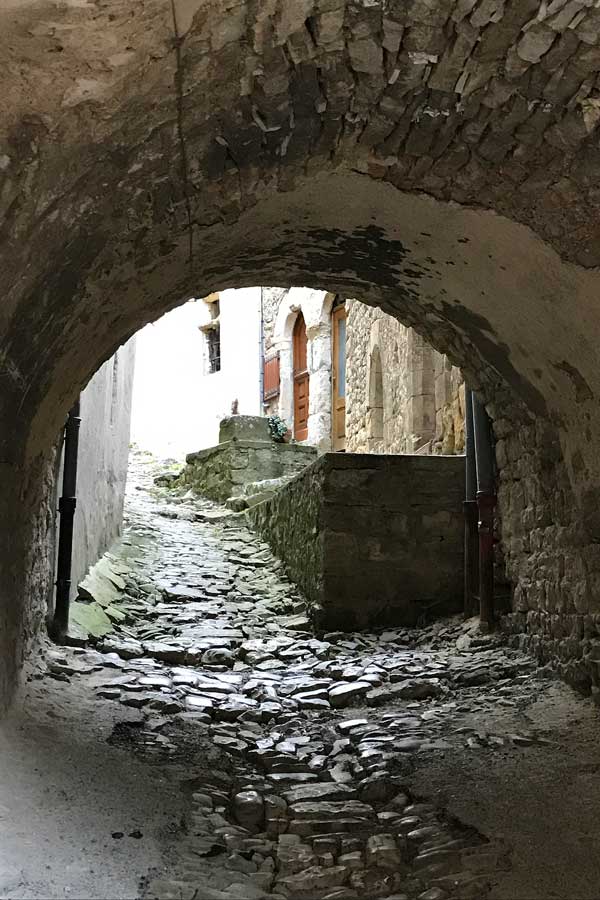 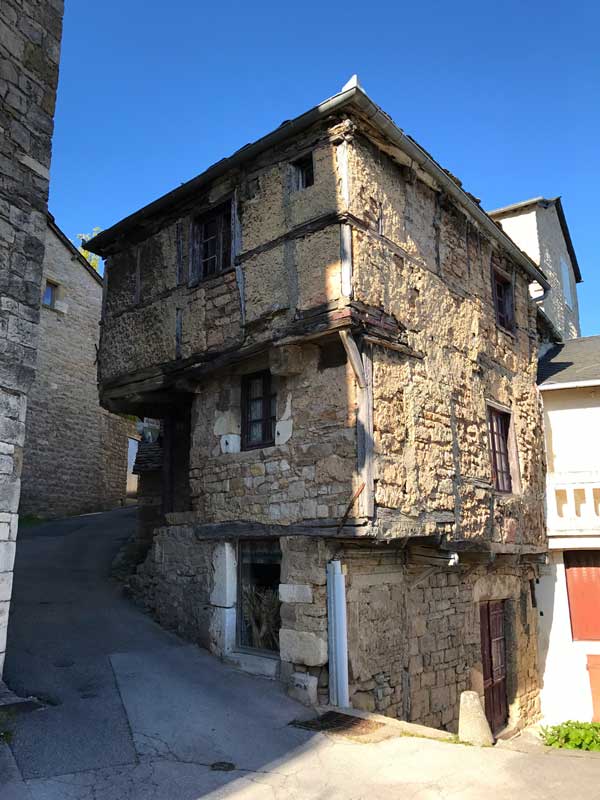 Maison de Jeanne dates back to the 14th century.  It is reputedly one of the oldest houses in the département of the Aveyron. It is timber framed with cob walls. Mediaeval events are held here in July and August and the doors are then opened to the public. 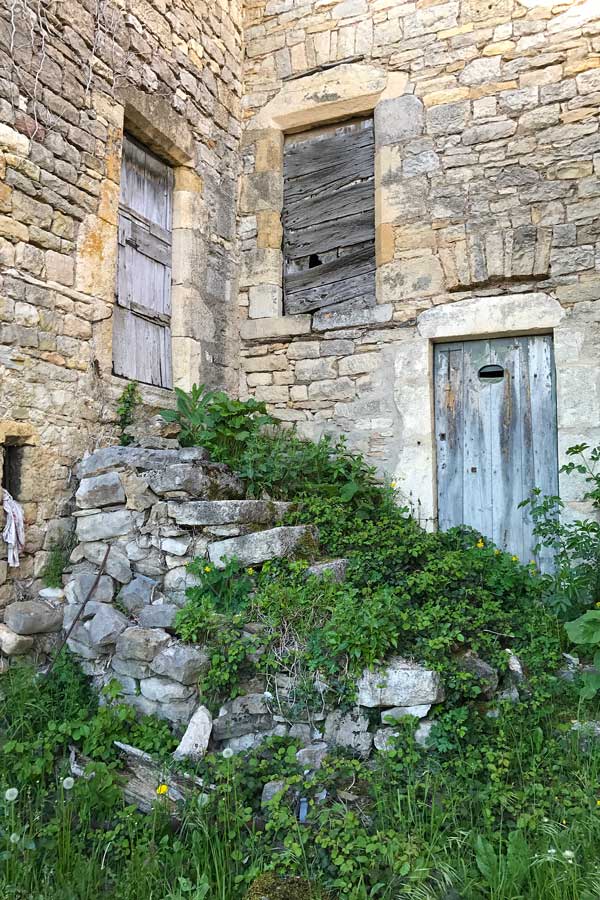 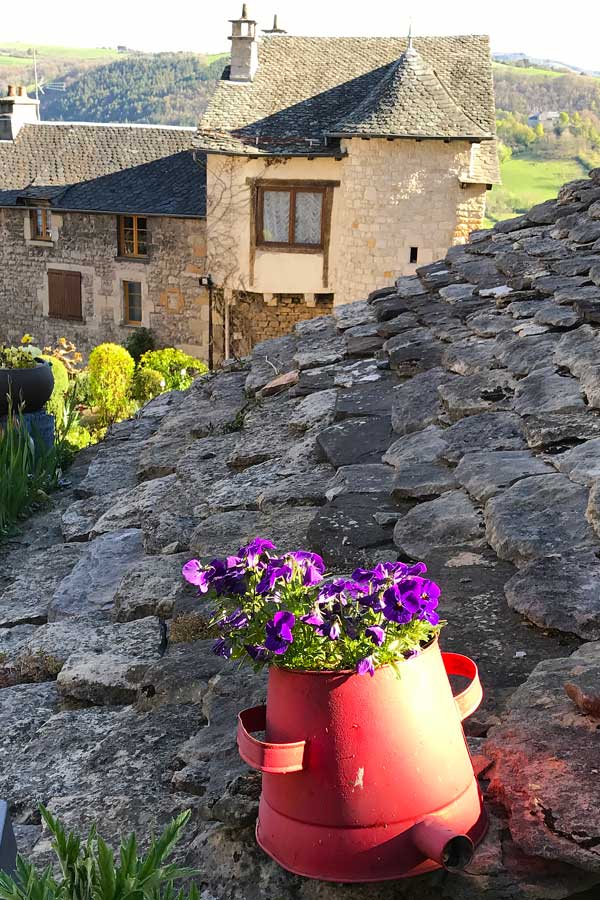 Tummies rumbling, we started looking for somewhere to eat. We passed a pizza place which looked decidedly unappetising, and we were starting to feel desperate when just ahead of us a window opened, a blackboard was thrust out, balanced precariously on the ledge followed by a smiling face with a crisp white chef’s hat.  “Bonsoir Monsieur, Madame. Comment puis-je vous aider?”Things were looking up. We had spent half an hour with our hostess getting recommendations on things to do in the area and where to eat (all in French),  not really understanding much. When she suggested we eat “Les hamburgers dans la fenêtre” we felt that our investment in Alliance Française was wasted.

So, not only had we understood correctly that the hamburgers were in a window, but we also understood that this friendly fellow wanted to know how he could help us. Two whole phrases!

We ordered “deux avec frittes, s’il vouz plait” and repaired to our delightful abode and washed down the excellent hamburgers with a bottle of Bordeaux that we had bought along the drive. 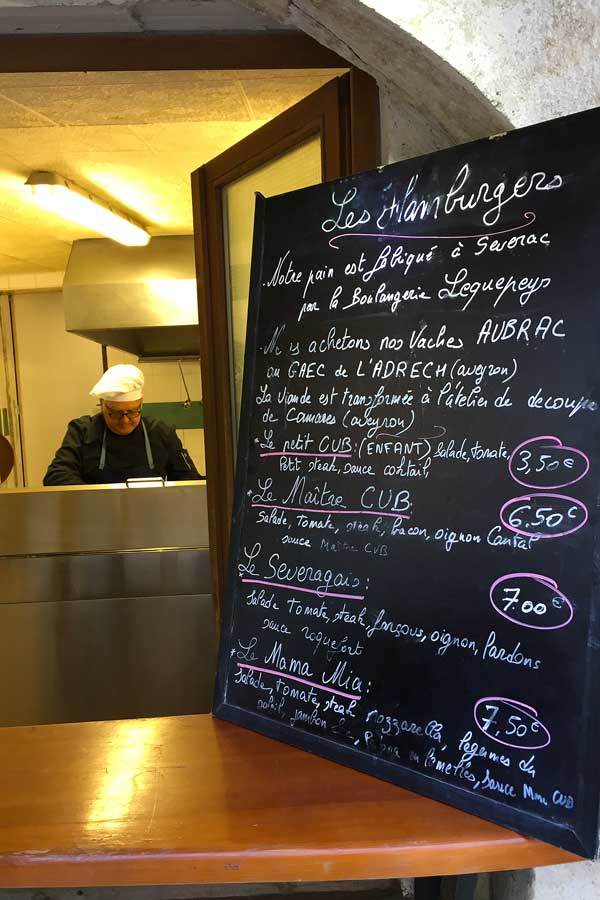 Back in 1905, in the very early days of motoring, the “route des Gorges du Tarn” was one of the very first tourist roads to be built in France, on the instigation of the young “Touring Club de France” The route from Severac to the Gorge passes through lush farmland with abandoned barns, bright yellow fields and new friends. 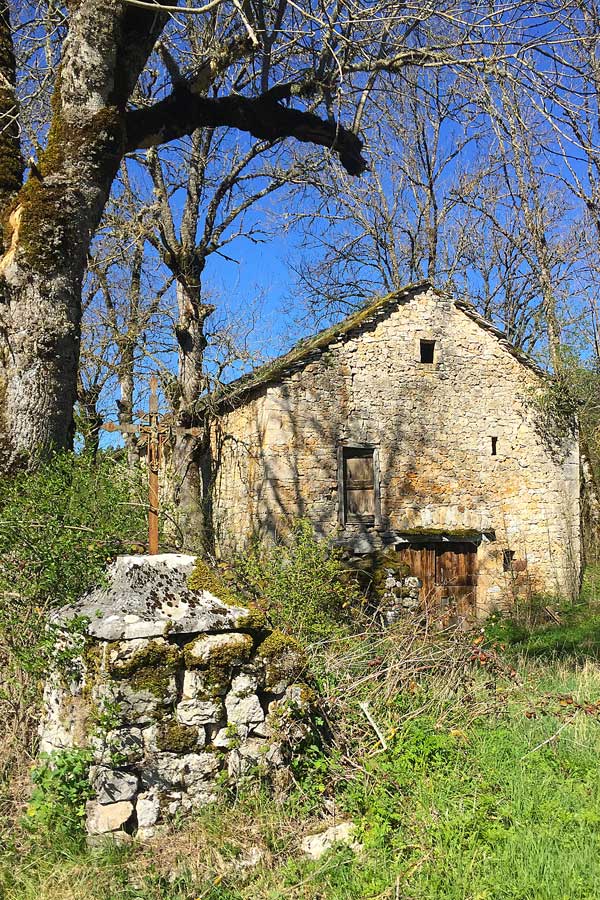 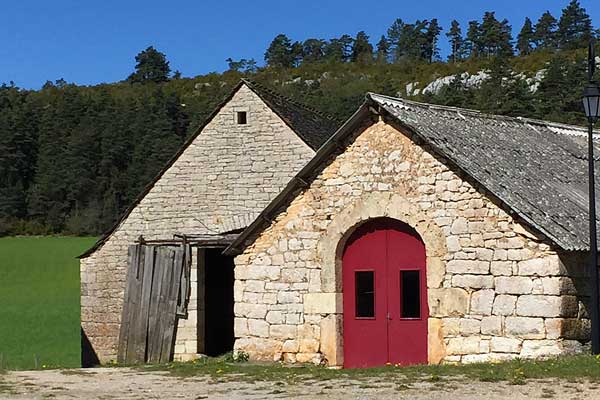 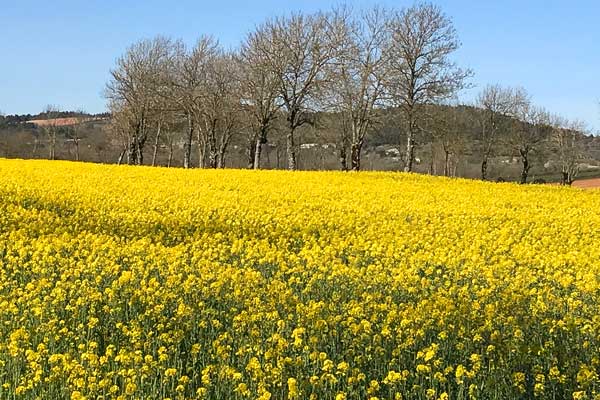 The descent from St Rome de Dolan to Les Vignes is breathtaking. The road then snakes alongside the river passing quiet villages, many classified as “plus beaux villages de France”. Some are only accessible by boat or by cable car. Narrow tunnels are cut through the rock. Castles, villages, bridges. 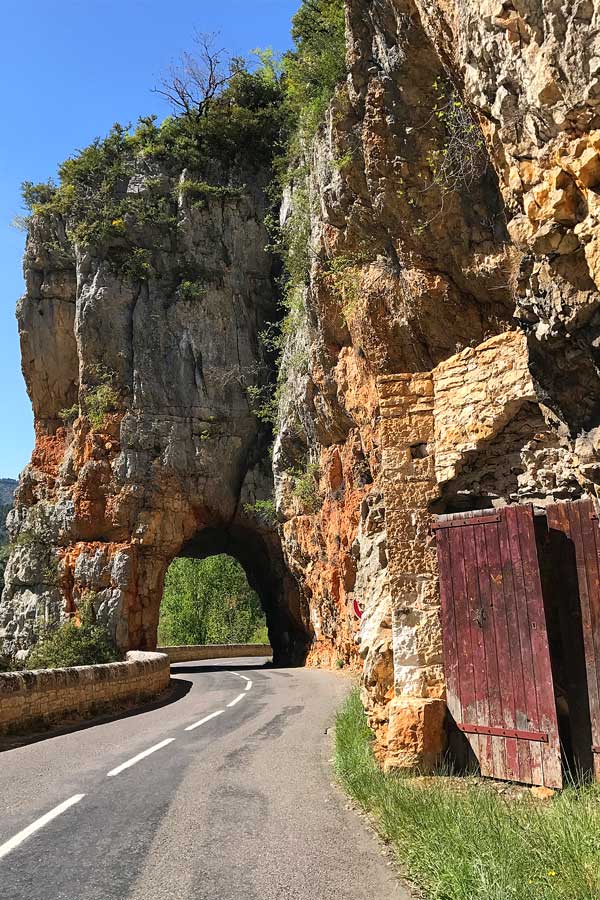 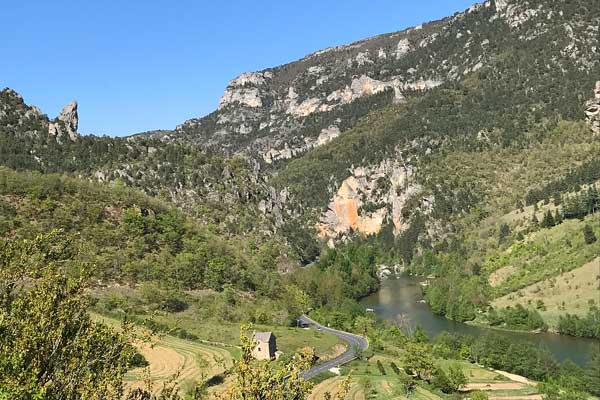 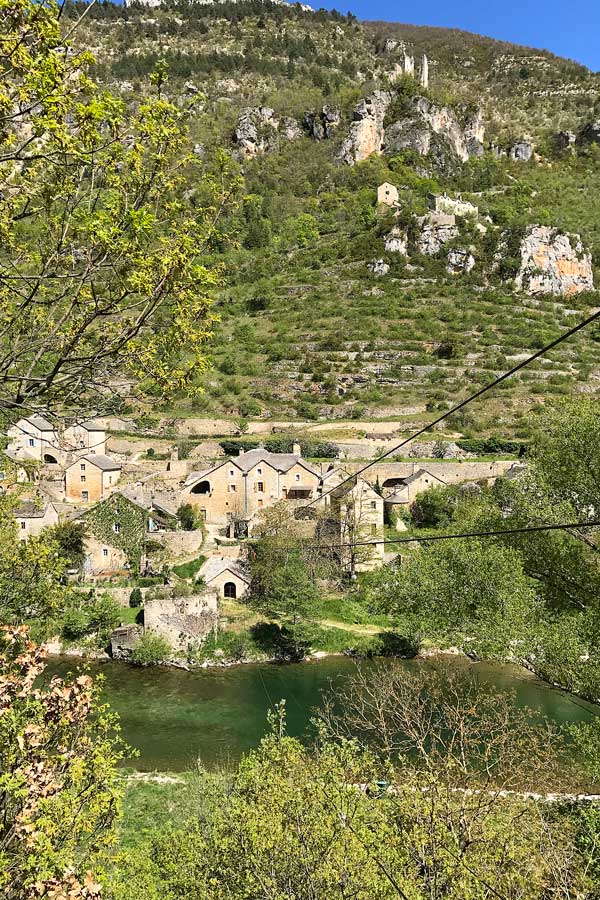 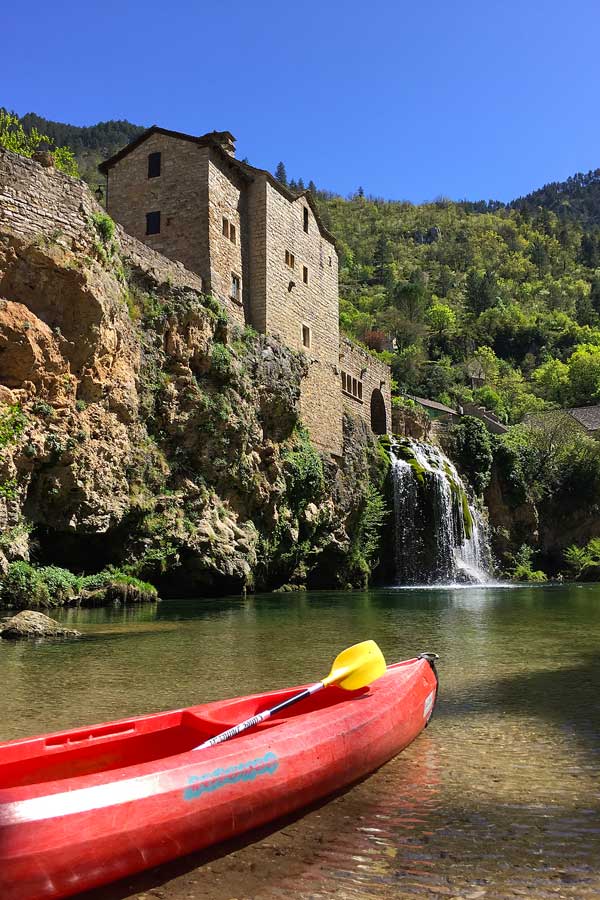 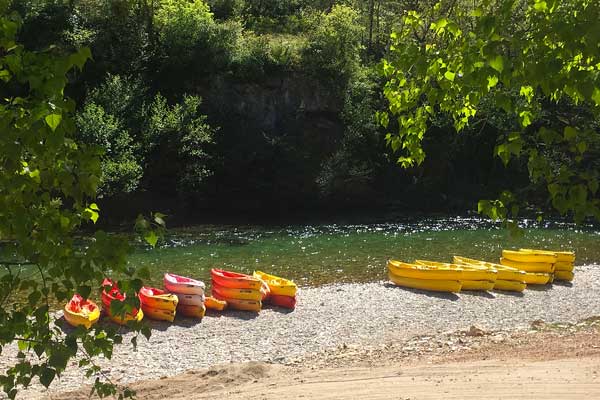 There are many kayaking opportunities on the Tarn.  We didn’t have the right clothes – something to look forward to next time 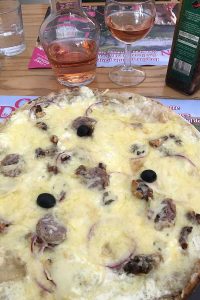 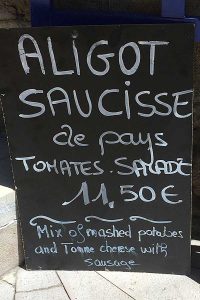 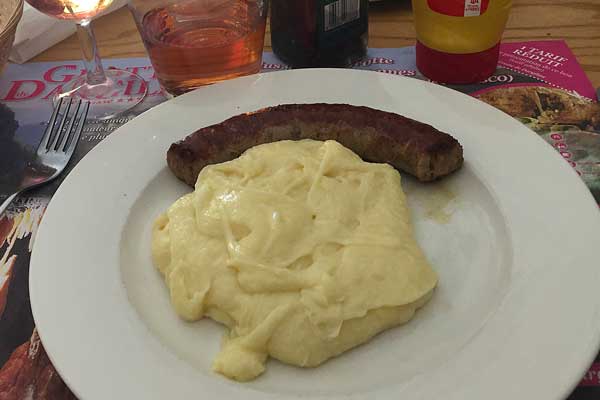 Aligot is typical dish in the Averyon area and is made from mashed potatoes blended with butter, cream, crushed garlic, and the melted Tomme cheese. The dish is ready when it develops a smooth, elastic texture. Recipes vary, 1 example is: 1 kg potatoes; 500 g tomme fraîche, Laguiole, or Cantal cheese; 2 garlic cloves; 30 g butter; salt and pepper.

This particular dish might not look appetising, but the flavours of both the aligot and the saucisson were exquisite. 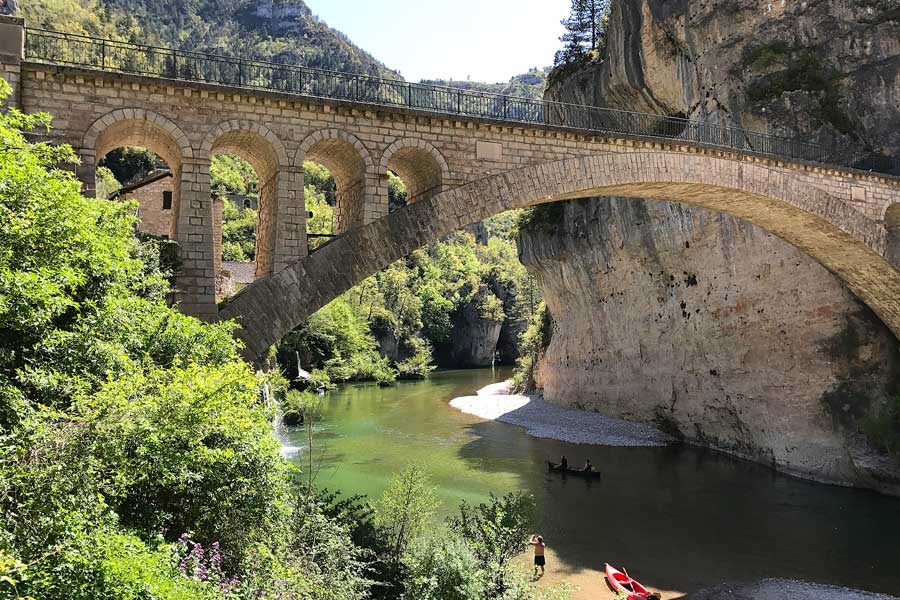 Ever since 2015, when we followed the televised route of the Tour de France along the entire length of the gorge, with helicopters providing bird’s-eye views and swooping just above the green waters, we have wanted to ‘do’ the Gorge. And it did not disappoint!