From nothing more than a series of sand dunes hiding ancient diamond deposits, Kolmanskop quickly grew into a thriving, wealthy mining town only to be completely deserted once again, all in the space of under 50 years. 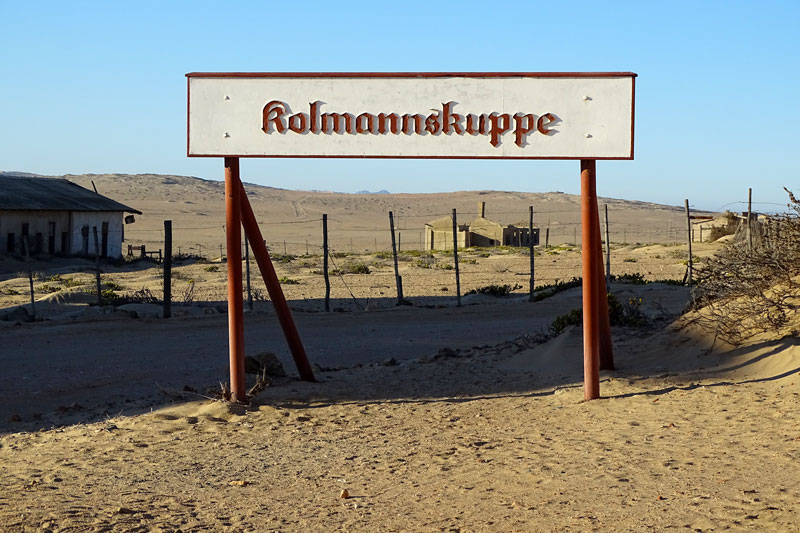 Kolmanskop was once a flourishing town (in then German South West Africa) boasting a bowling alley, a casino, an acoustically superior entertainment hall and an ice factory as well as its own post office, police station, school, hospital, swimming pool, general dealer, bakery and butchery. The town was also home to Africa’s first tram. 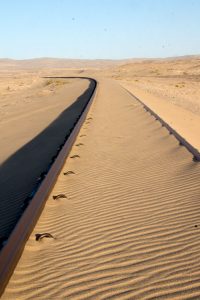 In 1908, Zacherias Lewala, a railway employee discovered an unusual stone while shoveling desert drift sand from the railway line. The discovery sparked a diamond rush and very swiftly it became home to more than three hundred German families and approximately 800 Ovambo contract workers who flocked to the area seeking to make their fortunes. The diamonds were small but so plentiful, that initially, you could apparently pick them up off the ground. The moonlight would reveal a glint or a gleam in the dark sand and the prospectors would crawl on their stomachs, literally collecting diamonds in jars!

Around 1912, almost 12% of the world’s diamonds came from this small enclave, making it one of the wealthiest places on earth for a brief time (given the per capita income and the small population.) The luxurious lifestyle of the town’s inhabitants was legendary. Champagne and caviar were imported from Europe, as was top class entertainment such as international opera performers. Water was railed in by the gallon and lush gardens were created despite the unfriendly desert. 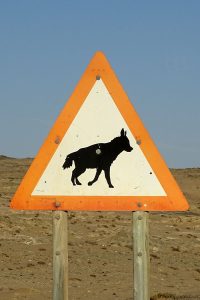 But all good things must come to an end. The diamonds that had been so easy to find began to dry up and richer deposits were found at Oranjemund some 200km further south. The fortune seekers left town as quickly as they had arrived, pursuing these greener pastures. Diamond mining finally came to a halt in Kolmanskop in 1954.

Just as soon as the last residents departed, the desert began to reclaim its own. Some of the strongest winds of any coastal region pushed open doors and the Namib sand flowed into the former homes and buildings, drifting through forgotten corridors and abandoned rooms. Welwitschia shrubs sent their taproots through tiny gaps in the wooden floorboards. Desert beetles and lizards set up home. 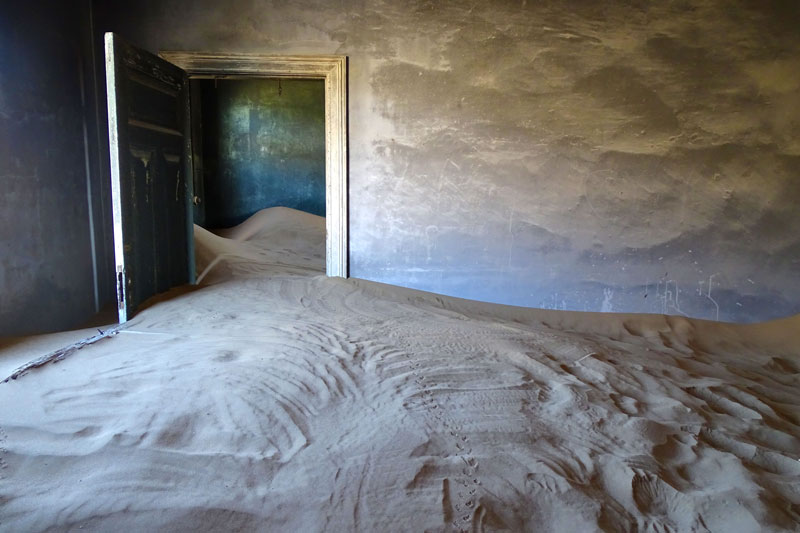 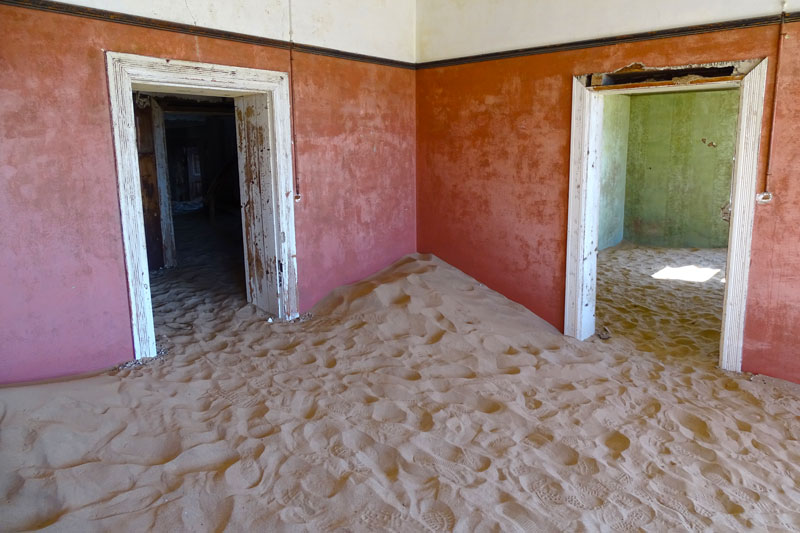 Today, the grand old homes continue to majestically defy the resolute wind and encroaching desert sands. They seem to rise up from the engulfing dunes like the Titanic before she finally succumbed to the pull of the ocean. 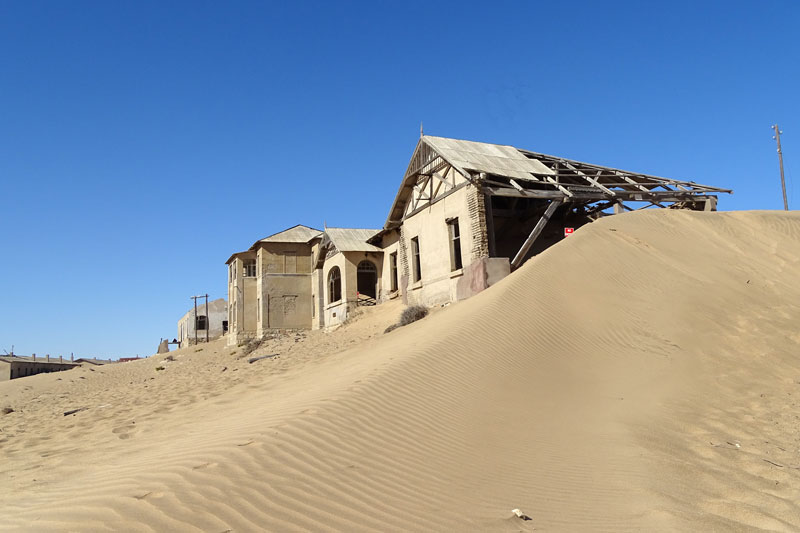 Kolmanskop lies 10km inland from Luderitz. We had procured a photography pass so that we could catch the sunrise ahead of the reserve opening. Even as more tourists gathered and the guides began their stories, we were struck by how eerily quiet the place is. There is something so sad and lonely about the deserted streets, the useless shutters carelessly cast aside and the crumbled staircases that lead nowhere. There is even an old bathtub, half cascading, half submerged on its way down a sand dune. 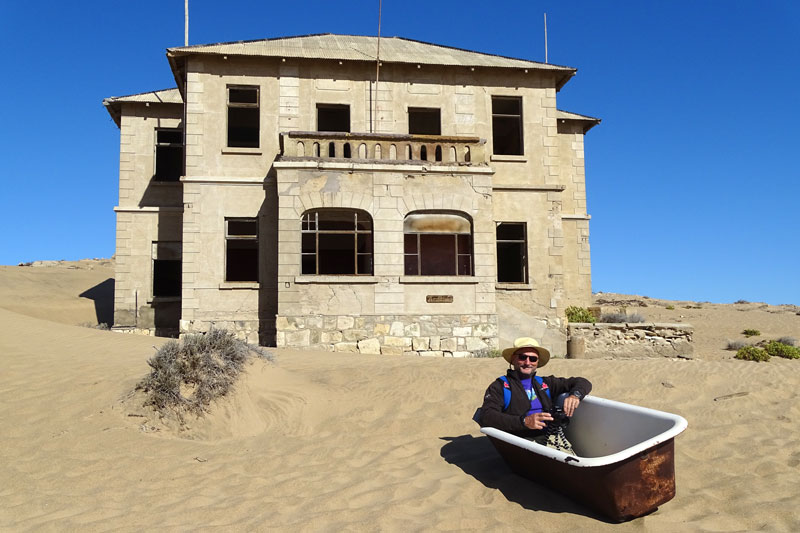 The hospital on the edge of the little settlement gives you insight into its once airy corridors and spacious wards. Apparently it could take up to 200 patients. It had the first x-ray machine in southern Africa, but perhaps it was used to check anyone suspected of imbibing a diamond or two more often than for a medical procedure. 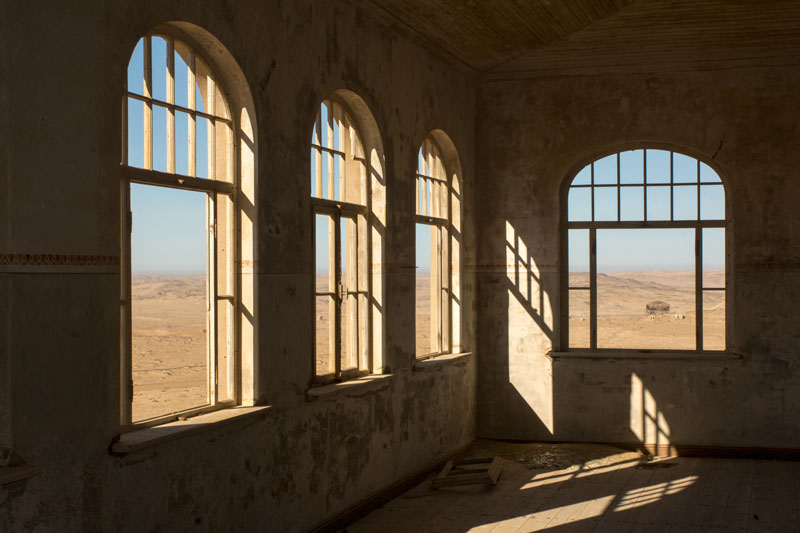 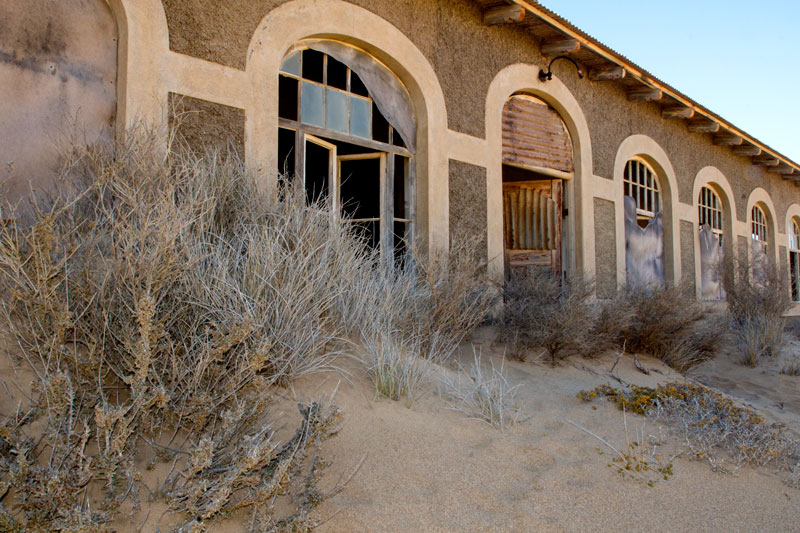 Wandering around the buildings to get good pictures, means crawling through broken wooden window frames, squeezing past half opened doors, pulled roughly from their hinges. Colourful paint still adorns many of the walls. A hundred years post their heyday, the streets are bleak, submerged in deep sand, windswept and lifeless. We spotted a lonely little springbok, nibbling on a meagre shrub, the only splash of greenery for miles. 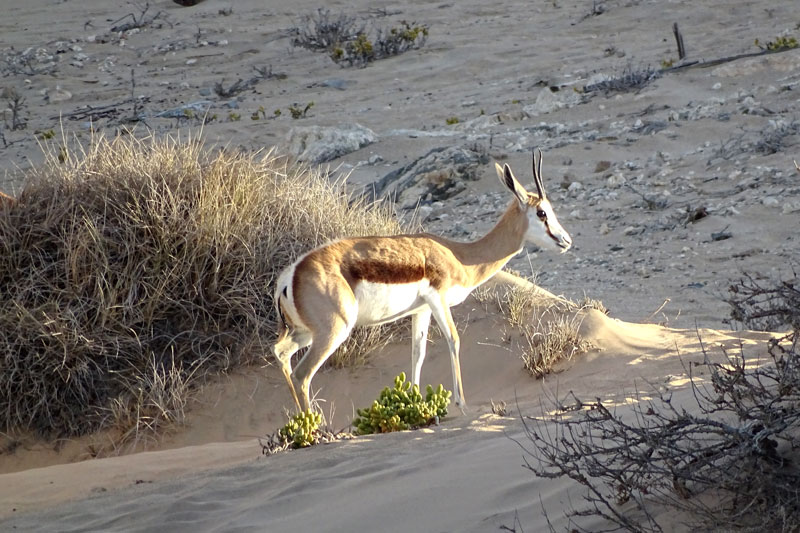 The town is compelling. We explored for hours and returned at sunset and then again at dawn the following day. We marveled at the shifts in light playing across the sand ripples, peeking through the skeletal structures. We stared at the view of the endless landscape through the large windows, just as others would have done a century ago. It is most probably the most amazing place I’ve ever had the opportunity to take photographs. 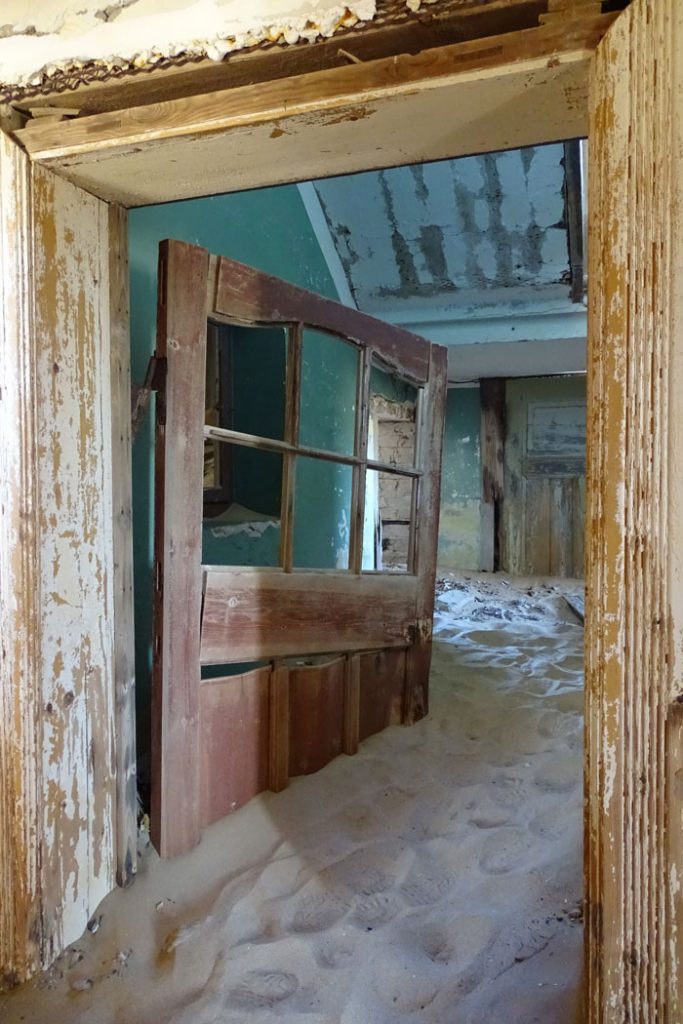 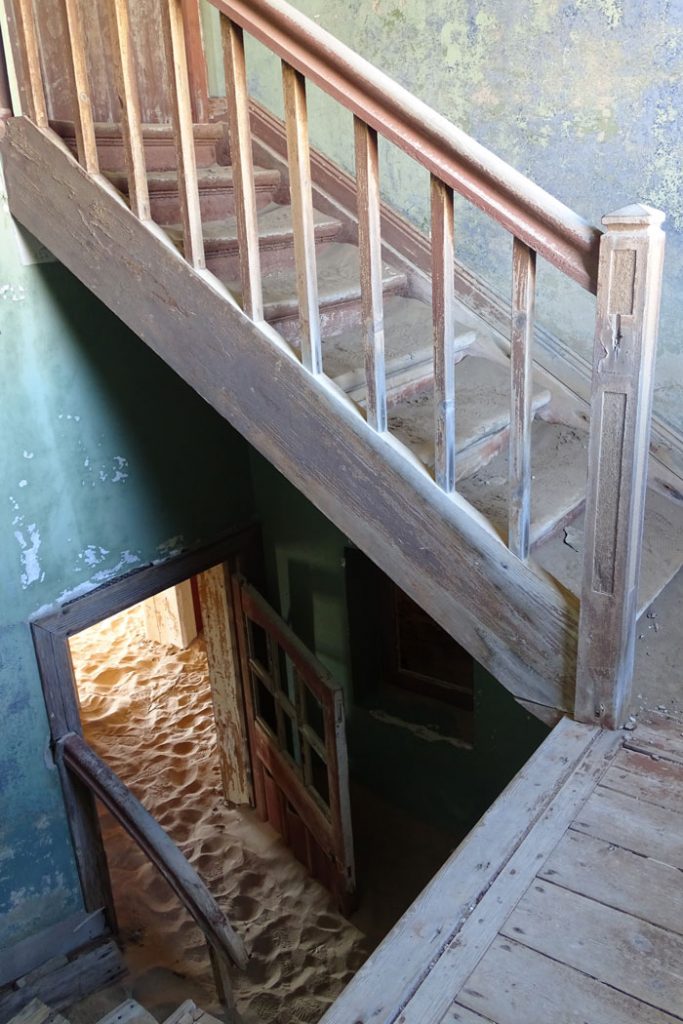 Science fiction novels have often tried to imagine the fate of civilization and its cities after the end of humanity. Kolmanskop makes you only too aware of how the shifting sand of the desert is able to re-absorb a town. The earth has existed for billions of years. Many more will pass as the earth continues to age. In comparison to that time frame, humans are but a blip on the screen. The earth is ever shifting, ever changing, and if and when humanity leaves, the earth will carry on in its state of constant change and renewal. 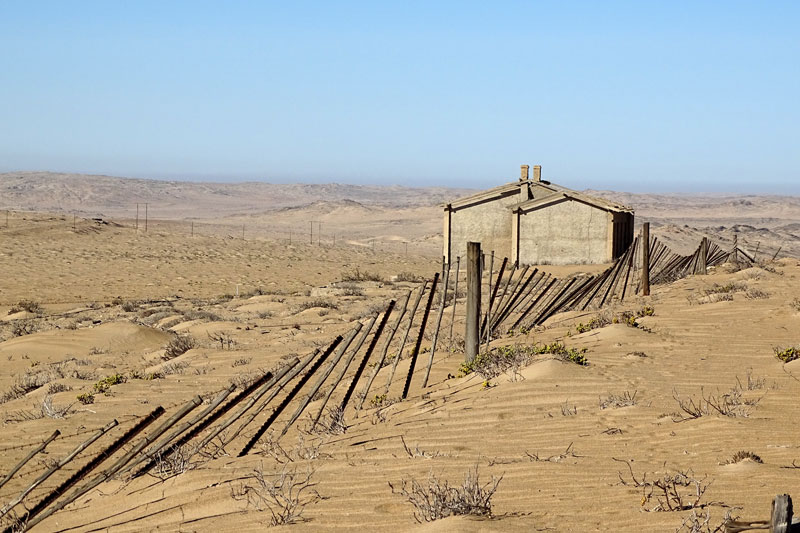