Budapest : “Pearl of the Danube” 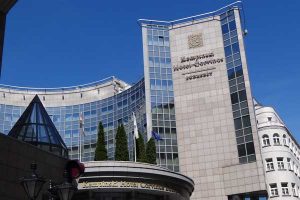 Budapest is the capital of Hungary and one of the most fascinating cities in eastern Europe. The city is divided in half by the Danube, and is comprised of a hilly and peaceful “Buda” district on the western side of the river and a flatter and lively “Pest” side on the east. The two sides are connected by the mighty Chain Bridge as well as a few other magnificent bridges. Each bridge has its own unique story that reveals a glimpse into Budapest’s fascinating past, and each structure provides a different view to appreciate the beauty of the surrounding city.  Most of the action happens in Pest, on the east of the river, where there are plenty of trendy restaurants and boutiques. On the other side is the baroque Buda Castle and some of the city’s most famous thermal baths.  We stayed on the Pest side at the lovely Kempinski hotel, which was located within walking distances of the city centre and many of the main sights. 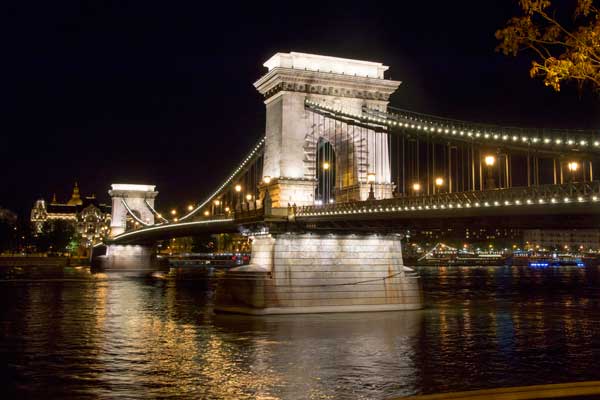 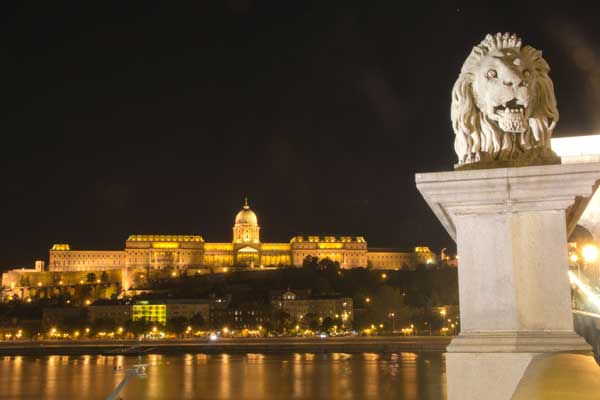 Budapest’s Bridges
Guarded by lions that symbolize power, Széchenyi Lánchíd (the Chain Bridge) was the first bridge to unite Buda and Pest. It was completely destroyed by the Nazis in World War II but quickly rebuilt once again. The stone lions that guard the entrance to the bridge are the original statues dating back to the 1800’s when the bridge was first constructed.
Prior to this bridge, people needed boats or a pontoon to be able to cross the river. Apparently sometimes people would walk across the frozen Danube and end up getting stranded on the other side during a sudden thaw. Legend has it that an important citizen once got stranded on the other side for a week while trying to get to his dad’s funeral. He ended up missing the funeral and was so frustrated that he commissioned the building of Budapest’s first permanent bridge.
The Chain Bridge was finished in 1849 and immediately became an important symbol of the city.

The second bridge to be built was the Margaret Bridge (Margit híd), an iron structure with many pieces that were actually manufactured in France and transported to Budapest by train. Built between 1872 and 1876, this bridge leads across to Margaret Island, a popular tourist destination and a hotspot after sunset. It is named after Margit, the beautiful daughter of a 13th-century king. As a teenager, Margit defied her father’s orders that she marry a neighboring king. Instead, she devoted herself to God and died an early death. She was only 28 when she passed away. Her parents were still so angry by her refusal to marry their chosen husband, that they did not attend her funeral. 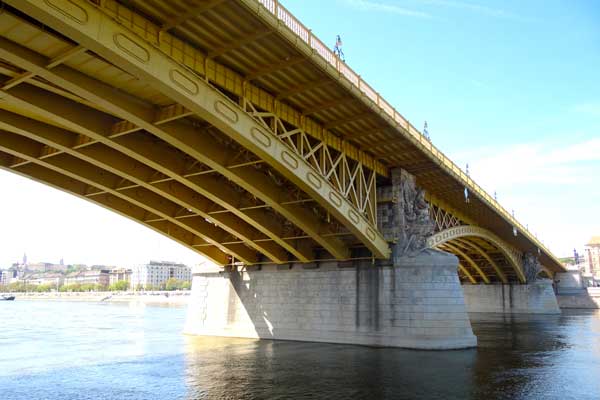 In 1944, during World War II, an explosion destroyed the eastern span of the Margaret Bridge, killing about 600 civilians and 40 German soldiers. Much of the original steel structure was retrieved from the river and incorporated when rebuilding.

Arguably the most elegant bridge is the Elizabeth Bridge (Erzsébet híd). The original of this bridge was built between 1897 and 1903. Once recognized as having the longest span in the world, the damage it sustained in World War II left it beyond repair. A new bridge was constructed between 1960 and 1994, now known as the only bridge in Budapest that could not be rebuilt in its original form. The bridge was named in honor of Queen Elisabeth (wife of Habsburg Emperor Franz Joseph), who was purported to love Hungary far more than Austria. 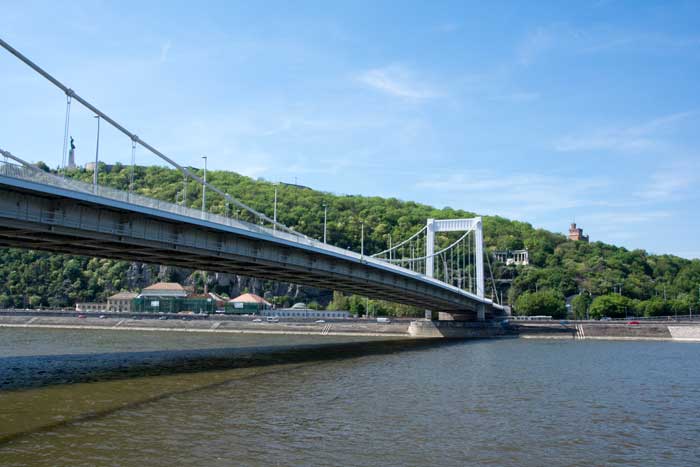 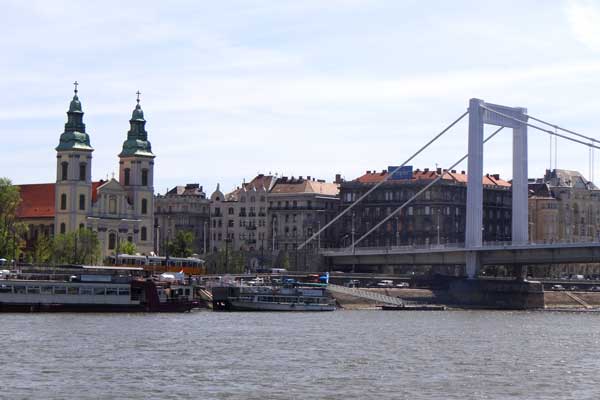 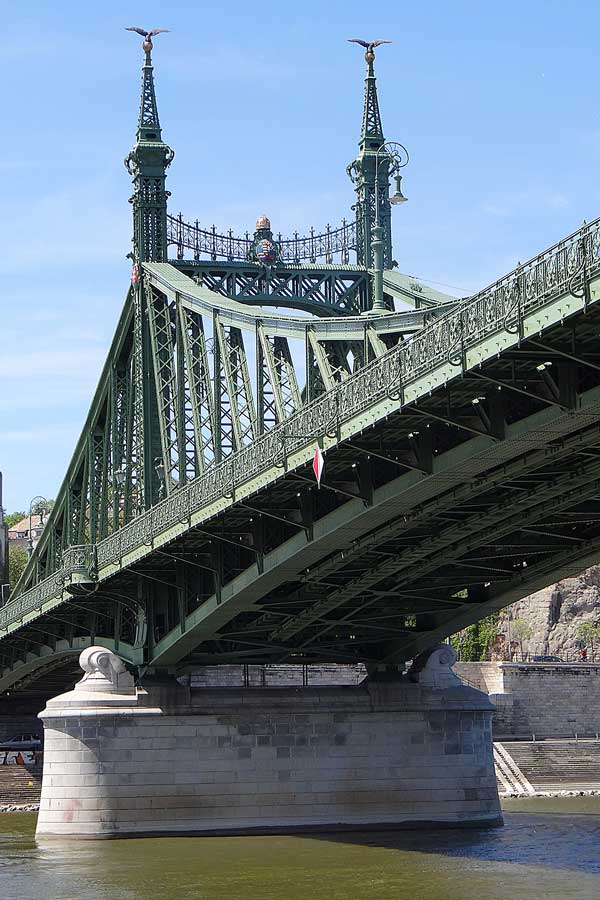 The Liberty Bridge (Szabadság híd) is known for the ‘Turul’ bird, (a mythical bird of Hungary) placed on top of each of the bridge’s pillars. It is also the shortest bridge in Budapest. The Liberty Bridge was built between 1894 and 1896 and was officially completed when Emperor Franz Joseph inserted the last silver rivet into its iron structure. 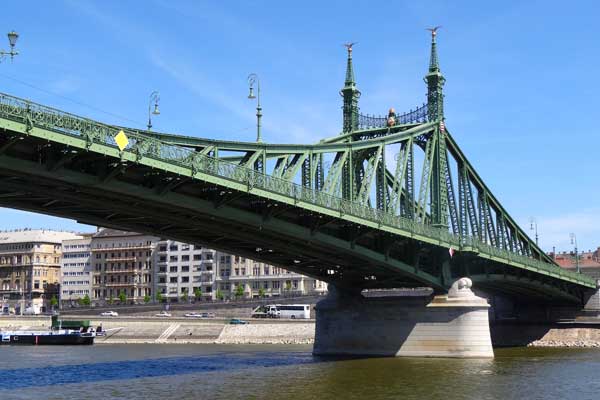 We took advantage of the excellent Hop-on-hop-off bus and canal boat ride. It was a wonderful opportunity to get a feeling for the city and to see the outstanding architecture that is everywhere. 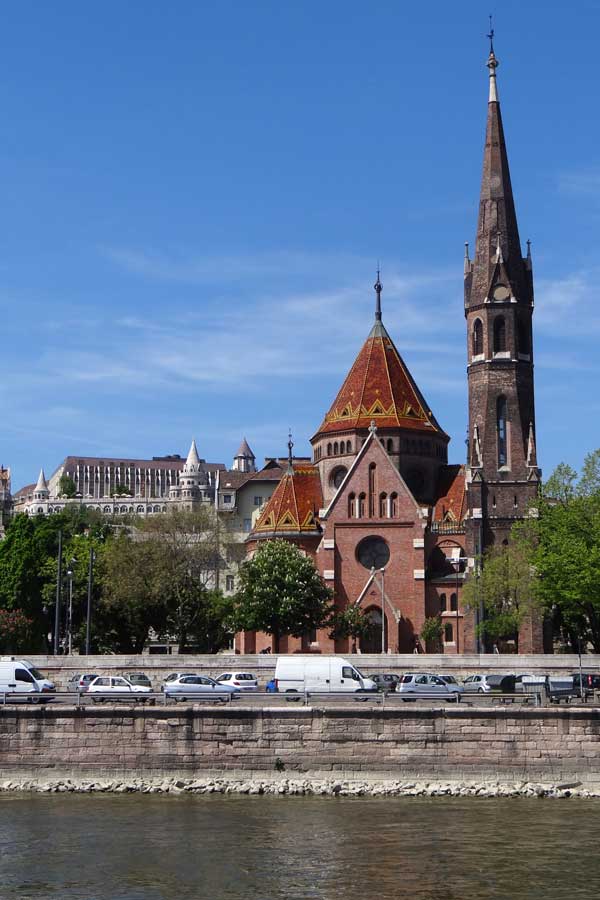 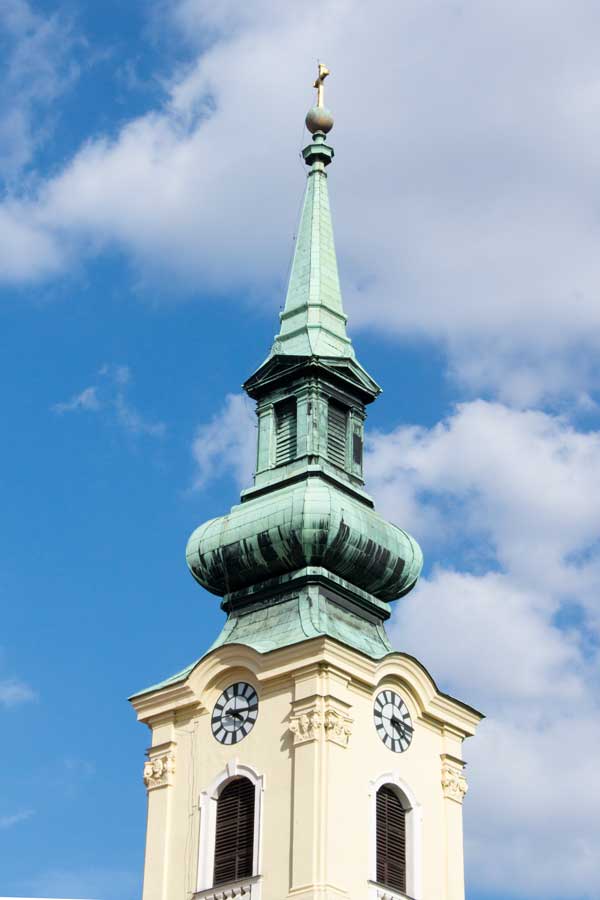 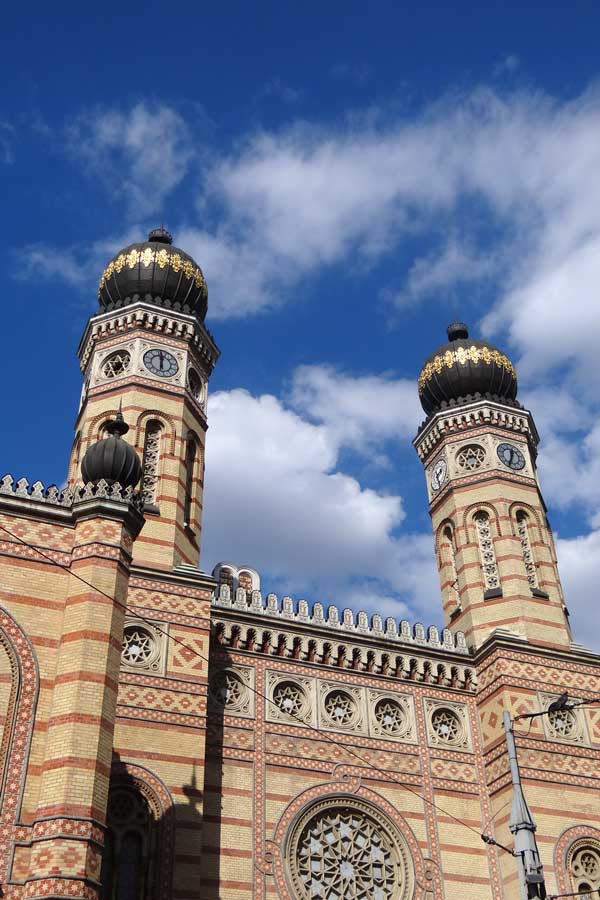 The Hungarian Parliament is one of the most popular tourist attractions in Budapest: this small Hungarian city has the 3rd largest parliament in the whole world. The imposing Gothic Revival style building is the largest building in Hungary, and is now part of the UNESCO World Heritage. Unfortunately, its architect didn’t have the chance to see his creation, as he went blind before the building was finished. The Hungarian Coronation Jewels are kept in the Parliament. 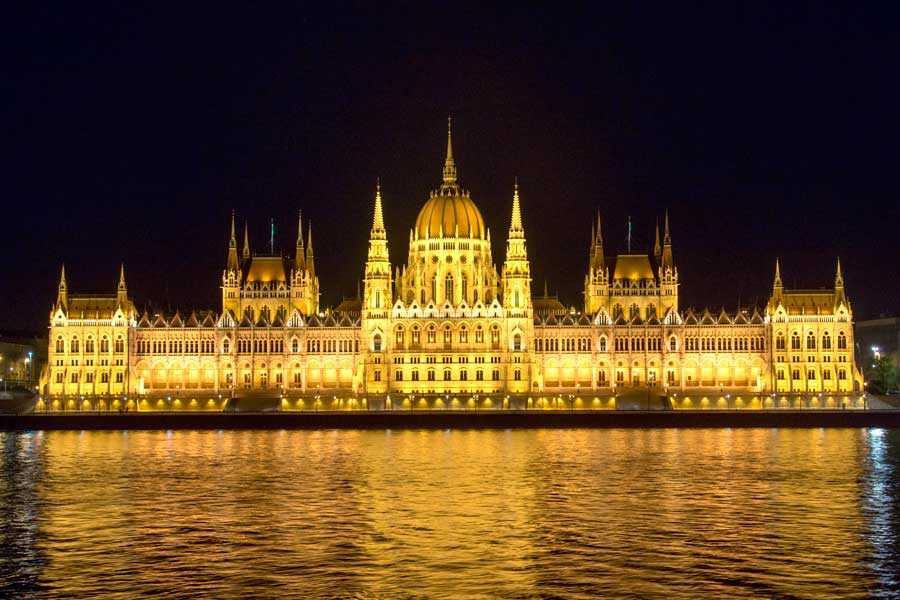 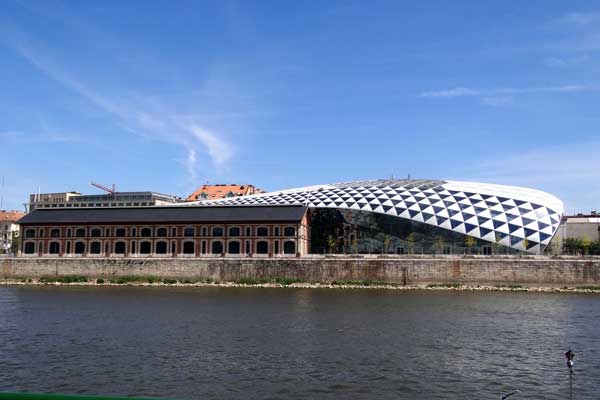 Bálna (literally ‘Whale’) is a cultural, trade and gastronomical center on the bank of the Danube on the Pest side of Budapest. Its whale-like shape and glass exterior is what makes it interesting.  Thanks to the glass walls, you get a wonderful view of the Danube river from inside the building as well. Nowadays you can find shops, small exhibitions and restaurants in this building.

The Castle District is located on the Buda Castle Hill,and it’s famous for the medieval, baroque and 19th century houses, churches and cobble-stoned streets. The Buda Castle has been an UNESCO World Heritage Site since 1987.

 The Castle District turned out to a stunning area of Budapest full of history, beautiful architecture and outstanding viewpoints. 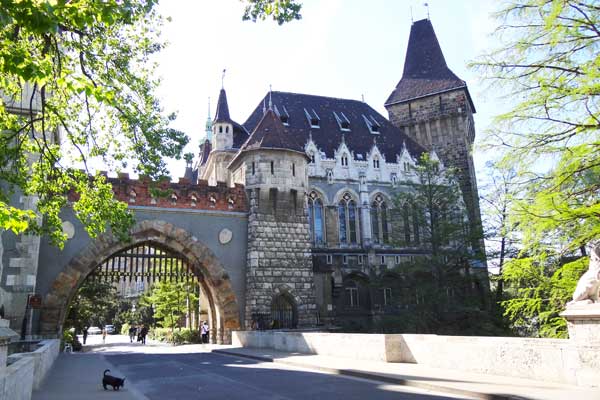 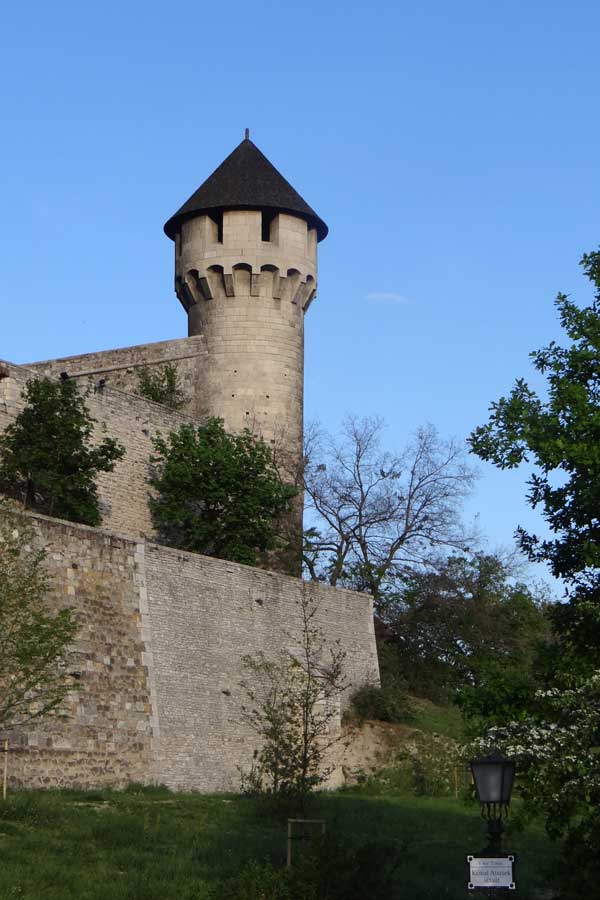 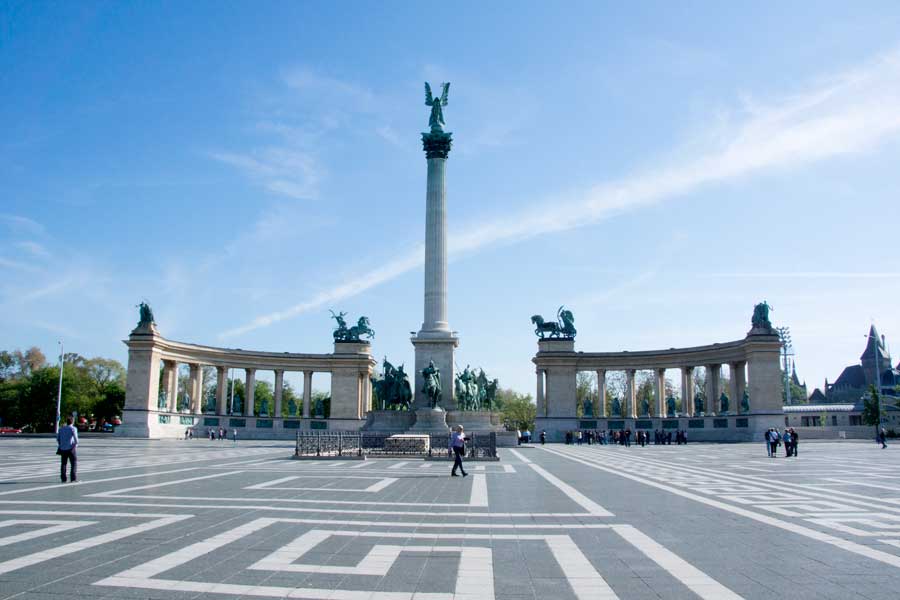 Heroes Square (Hosok tere) is a tribute to significant Hungarian leaders. The Millennium Monument in the middle of the square was erected to commemorate the 1000-year-old history of the Magyars. Archangel Gabriel stands on top of the centre pillar, holding the holy crown and the double cross of Christianity. 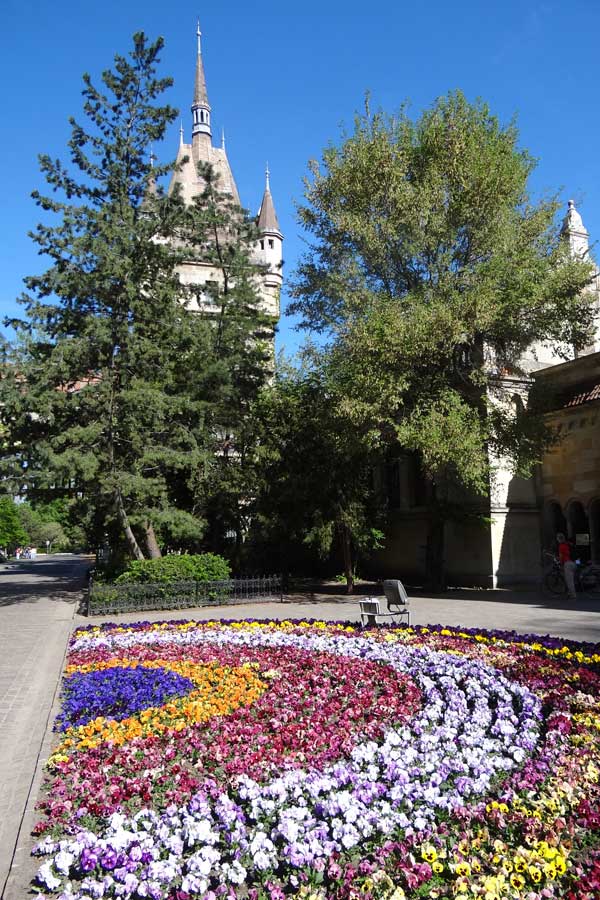 City Park is the largest park in Budapest. The first trees and walkways were established here in 1751. In the first decades of the 19th century a park was created, which became the first public park in the world. In 1896 the Millennium Celebrations took place here, leaving many attractions behind. 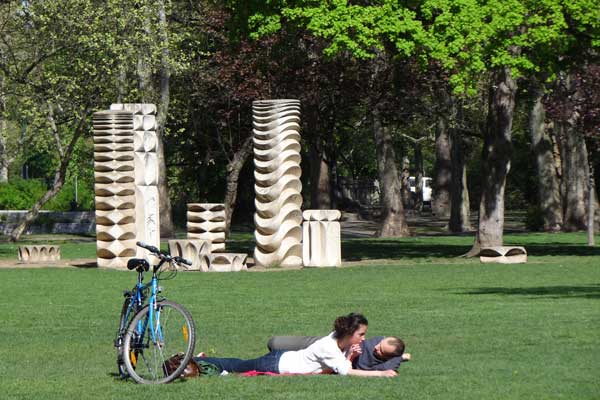 Vajdahunyad Castle, a replica of a Transylvanian castle of that name, was built to show the various architectural styles found in Hungary, and has Romanesque, Gothic, Renaissance and Baroque parts.
The castle is surrounded by an artificial lake that’s used for boating in the summer and turns into an impressive ice skating rink in the winter, which is a local favourite. 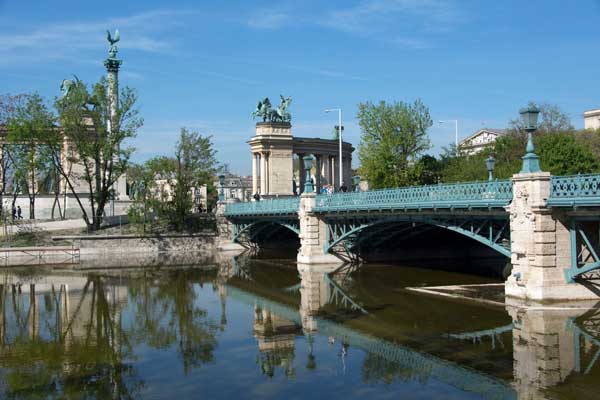 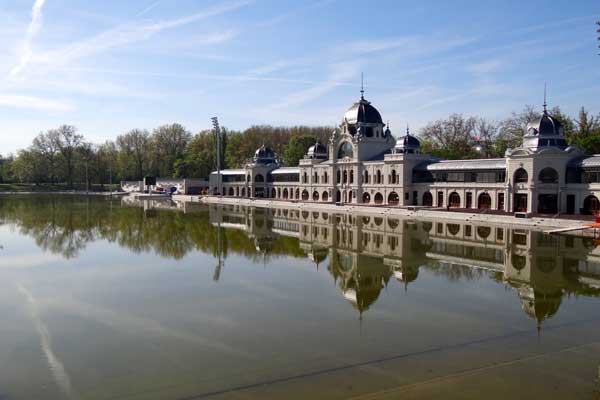 The Time-wheel monument is the world’s largest hourglass. It is 8m high and weighs a whopping 60 tons. It was created to commemorate Hungary’s joining of the EU in 2004 and is a unique work of art made out of steel, granite and glass.
Glass granules flow from the upper chamber of the time wheel to the lower chamber throughout the course of an entire year. The flow of the sand is controlled by a computer. Every year on New Year’s eve the glass granules or “sand” runs out and the time wheel is then turned one hundred and eighty degrees in order for the hourglass to start all over again. The turning of the  wheel is done manually by four people using steel cables and takes approximately forty-five minutes to complete the half turn. Machines are not used during this process in order to symbolize human strength and to remind everyone of the thousands of years in the past when machinery was not available and the moving large objects was done solely through human ingenuity and manpower. 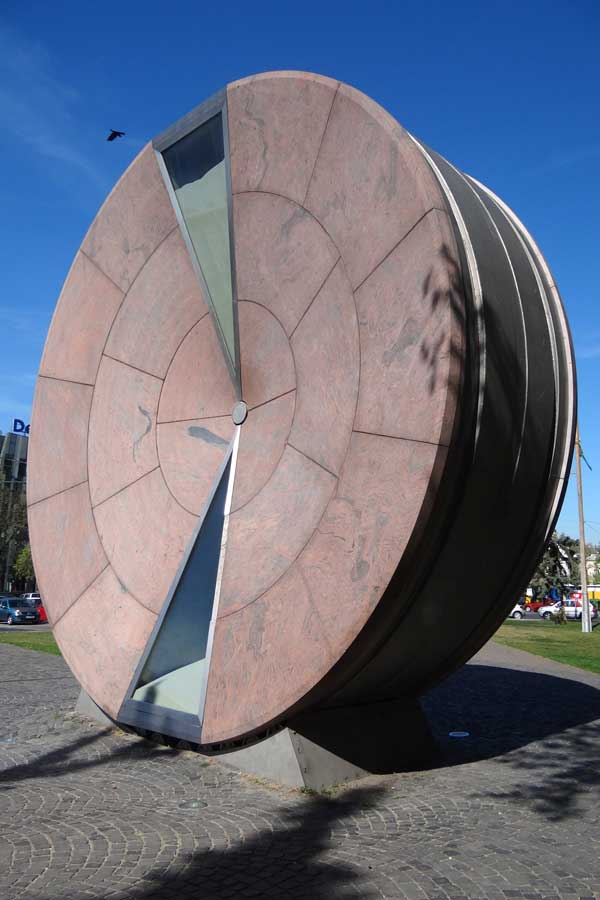 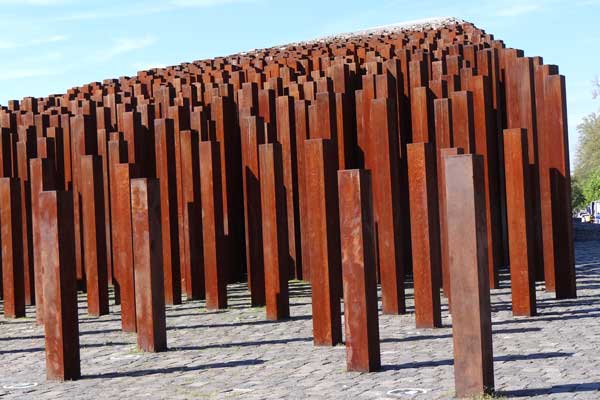 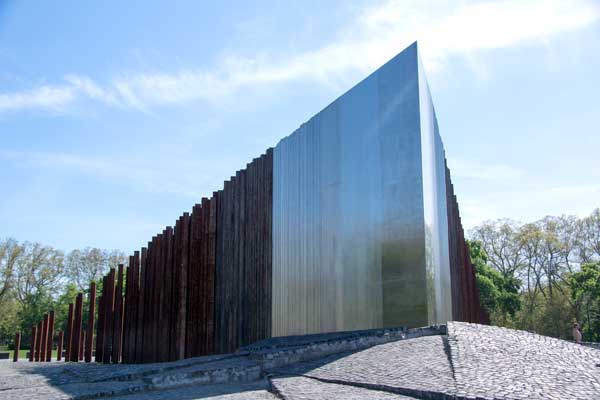 The Liberty Statue or Freedom Statue(Szabadság-szobor) is a monument on the Gellért Hill in Budapest, Hungary. Gellert Hill is 235m high, covered in lush forests on the Buda side of Budapest, soaring over the river Danube. On the top of Gellert Hill you can see the rectangular shaped building of the stern Citadel (a 19th century fortress) and the iconic Statue of Liberty, the athletic female figure holding a palm leaf. It was first erected in 1947 The 14 m tall bronze statue stands atop a 26 m pedestal. It commemorates those who sacrificed their lives for the independence, freedom and prosperity of Hungary.

This is a city with a tumultuous history and an optimistic approach to the future.
With the wide Danube winding through its centre, one of Europe’s most stunning skylines and plenty of fabulous architecture lining the Buda and Pest sides of the river, Budapest can justly claim to be one of Europe’s prettiest cities. 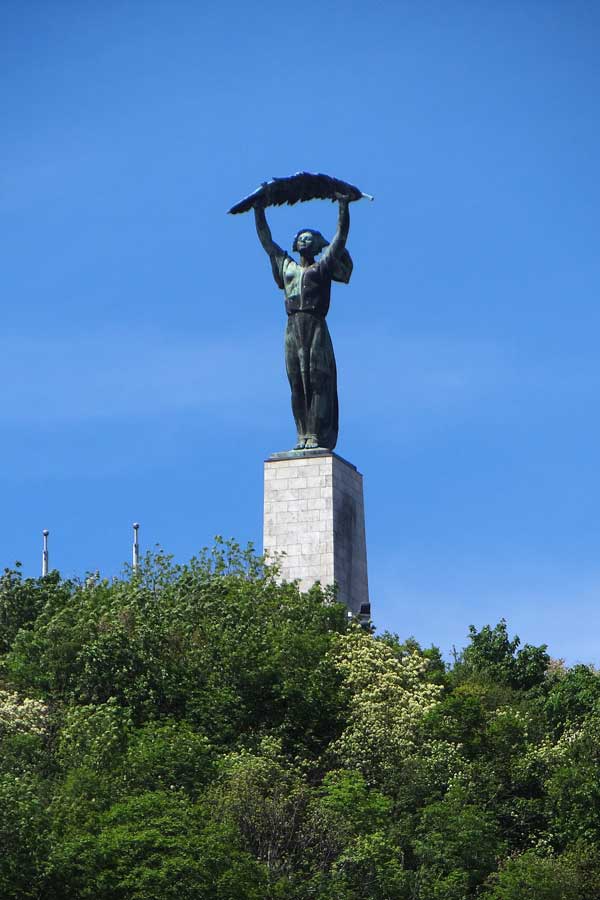 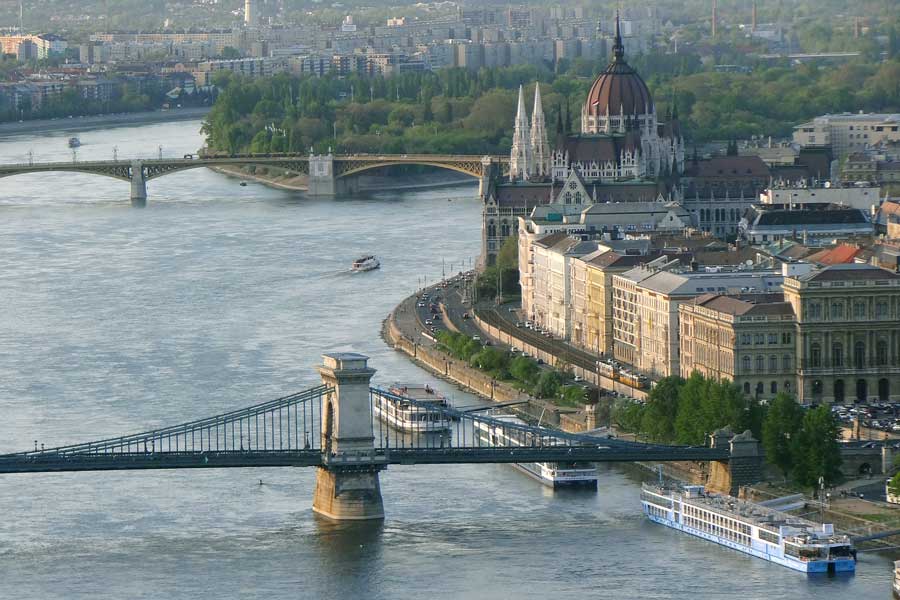