There’s a chilly katabatic wind blowing unchecked across the desolate Karoo escarpment when we stop at the settlement that was once the proud village of Putsonderwater.

I’m a little in awe of finally being in Putsonderwater. The name is frequently used as a metaphor to indicate a faraway, remote never-land, like Timbuktu. I reflect on other Afrikaans names that conjure up staggering images of desolation, drought and extreme wilderness – Hotazel, Moordenaarskaroo, Pofadder. The signpost is extremely faded, but yes, it’s a real place, or at least, it once was a real place right here in the middle of nowhere. 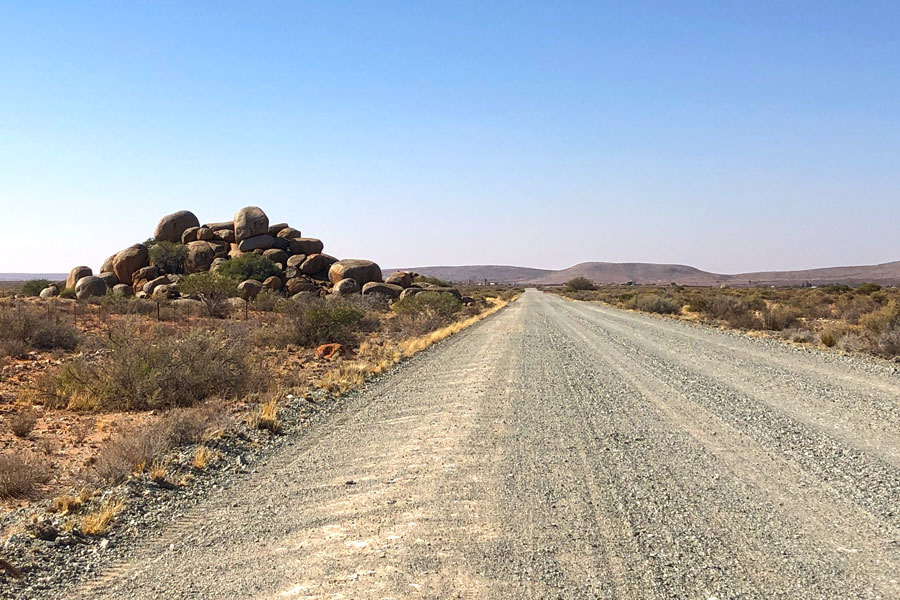 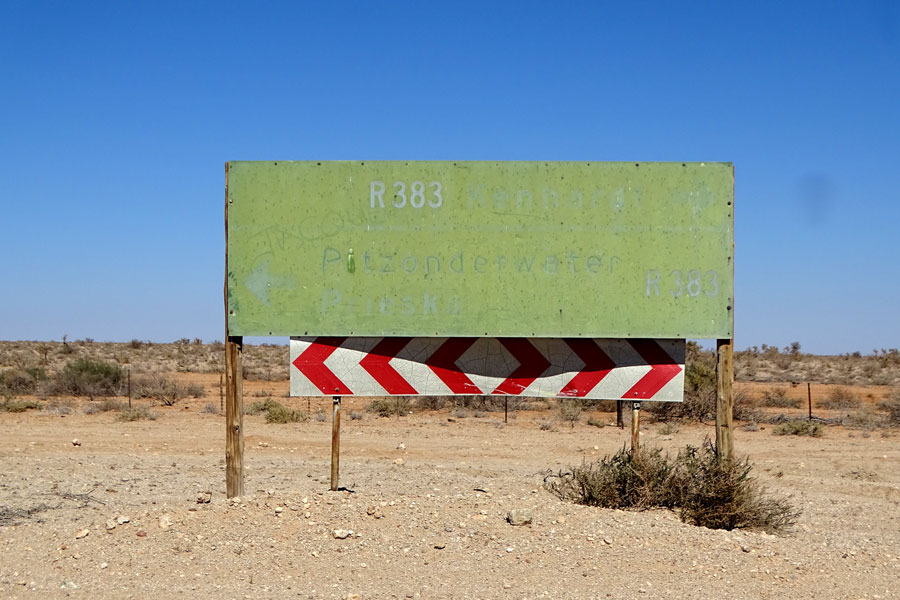 Twenty or so derelict houses, a faded hotel with close to collapsing wooden floors, a hollowly empty school room and the remains of a railway station building, are all that remain to welcome the visitor.

Nature has begun the surprisingly swift task of reclaiming her spaces. Roots and weeds pierce the previously plastered walls, birds build their nests under eaves and in old cupboards and a few old cars decay under layers of rust. Sand has blown in through the shattered windows and precariously hanging doors. It’s somehow unspeakably sad. Interrupted lives and unfulfilled dreams linger in every doorway and each broken down stoep, where children would play in the shade and neighbours would pass the time of day. 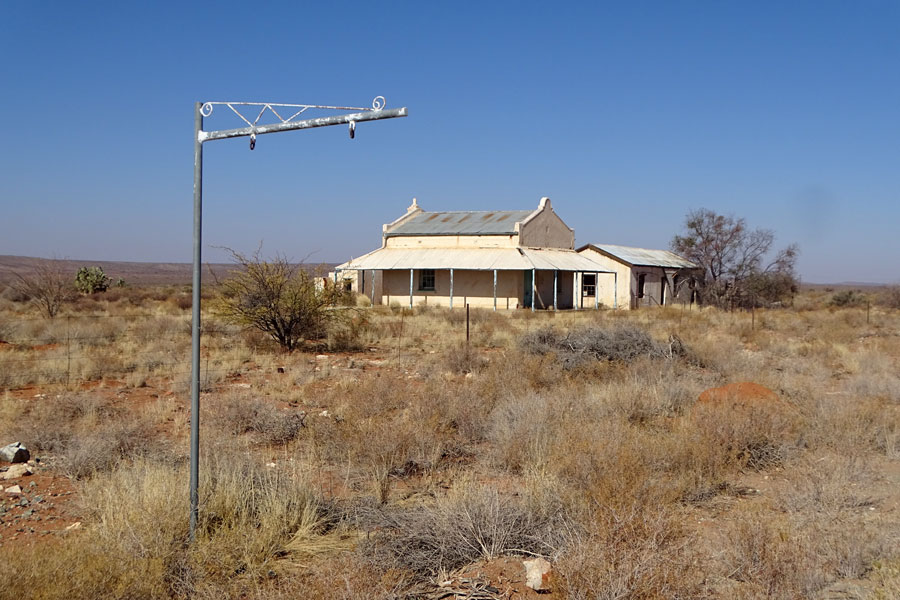 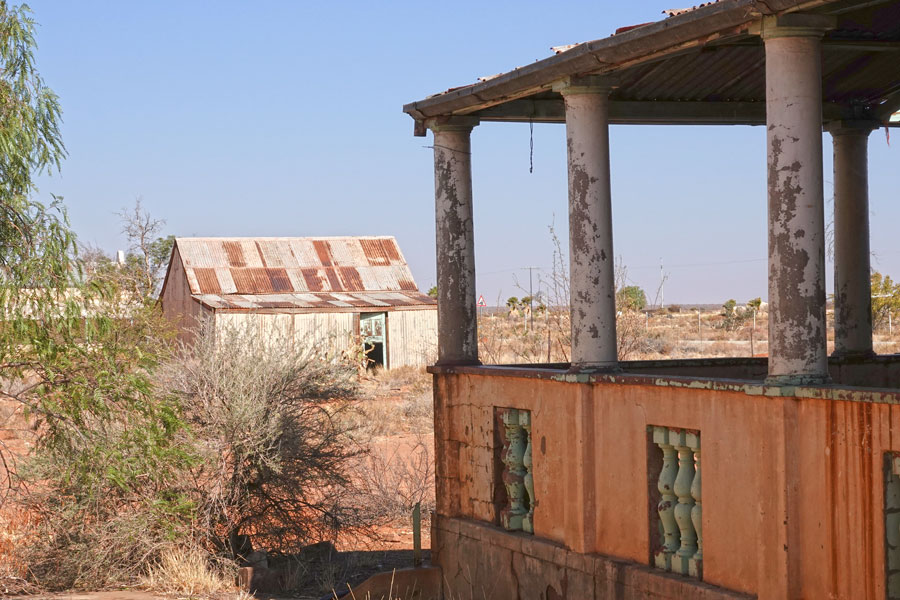 The heart of Putsonderwater was the railway station. Today the broad platform and overgrown railway line contribute to the finality of its status as a ghost town. The palm trees that must have been magnificent when water was more abundant, still fight for survival. As your eye travels along the railway line, the enormous weavers’ nests teeter like giant huts on the telephone poles. 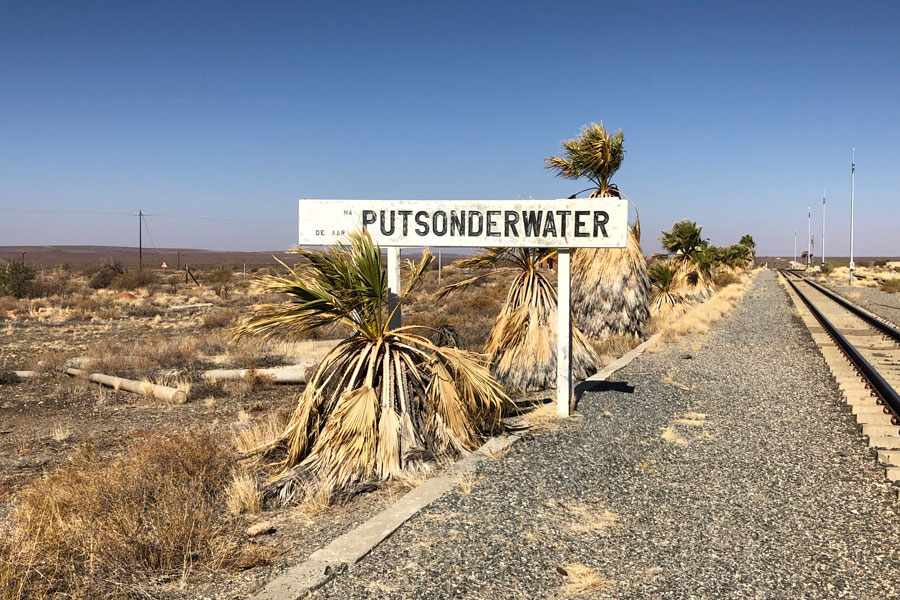 Standing on the shabby stone platform it’s hard to imagine that in its heyday during the 1980’s this was an important stop on the Cape to Windhoek route and that it won the Lady Duncan trophy in 1988 as the best railway station in the country, widely admired for its charmingly tended and luscious gardens. (Chris Marais www.karoospace.co.za.)

An old coloured man, David Ockhuis, dug a well shortly after 1880. His sons, Hans and Gert, helped him and they dug up a good supply of fresh water. The well was very important in a region where migrants had to travel far from one water site to another during the drought. Ockhuis realised that if he boasted about his water, he could easily be pushed from his farm, because land was then completely free and very few had legitimate land documents. 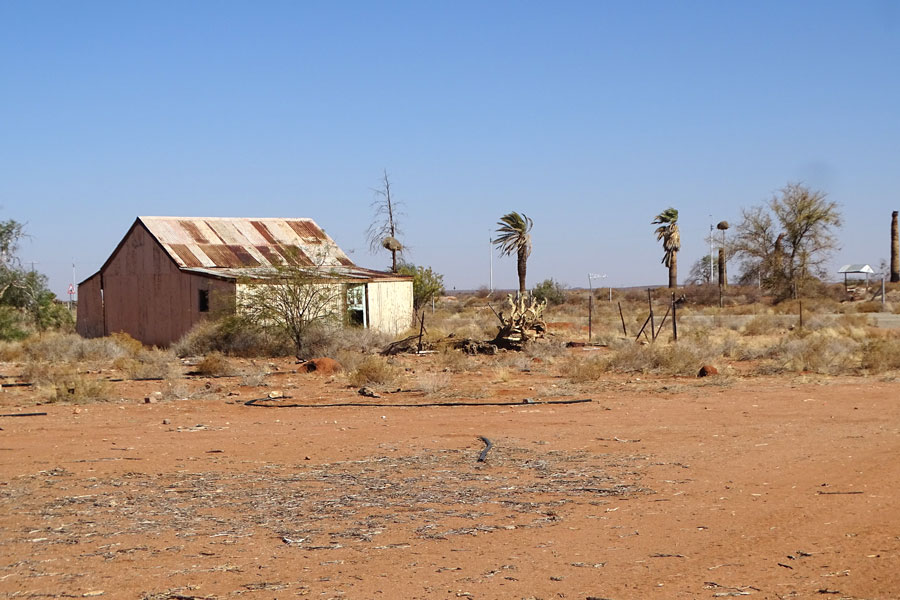 One of Putsonderwater’s derelict homes with the original “put” or well on the extreme right.

Consequently, for every migrant farmer who came along with his thirsty cattle, Ockhuis said: “Ja meneer, ek het ‘n put, maar dis ‘n put sonder water.”  “Yes, sir, I have a well, but it’s a well without water.” In this way, Ockhuis retained the farm for several years until in 1886 it was leased and Ockhuis had to move. The well that Ockhuis and his sons dug for years became the site of a pumping station that supplied the village of Putsonderwater and the railway locomotives with water. (Sybrandus Adema, www.mg.co.za)

A nearby mine used to produce marble-like feldspar, which was cleaned and loaded into carriages at Putsonderwater station to end up as Buddha carvings as far away as Taiwan. 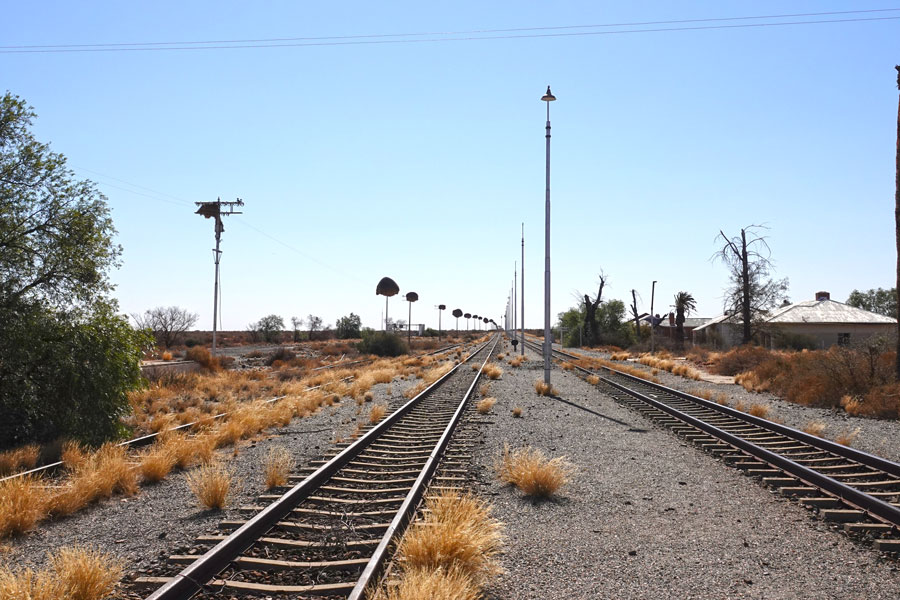 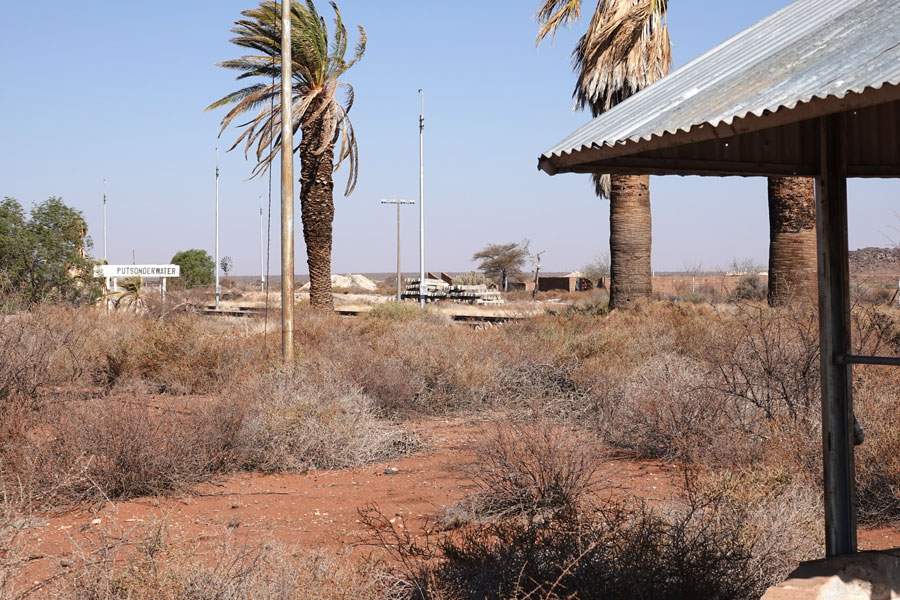 Looking towards the station platform
from the well or “put“

It seems that firstly severe droughts brought the cattle trade to an end followed by a reduction in passenger trains. Eventually by the turn of the century the freight trains no longer had any need to stop. Then the police station, hotel and general dealer closed one by one. The school kept going for a while owing to the feisty efforts of teacher Ena Hough.

In the end, the school, where each learner had planted and cared for his or her own tree, came to a stop. And so, too, did the village. “I went on pension and nobody applied for the position,” says Hough, regretfully. “There was no water, no electricity, no housing and no one was prepared to commute from Marydale as I had done.”

As a last act of hope, she had the school painted and put up signs in the windows requesting people not to break the glass. “By that time vandals had damaged so much of the village; at the hotel the doors and stained-glass windows and the floors had already been taken out.”

She says people were sad to leave, many wanted to “stay just one more night” in their beloved houses. But her biggest reward and legacy was that some of her learners completed matric, despite all the challenges they faced. When asked to describe the village’s atmosphere, she hesitates.

“How can I put it? It was old-fashioned, unspoilt … with down-to-earth people. It was amazing.
(Sybrandus Adema, www.mg.co.za) 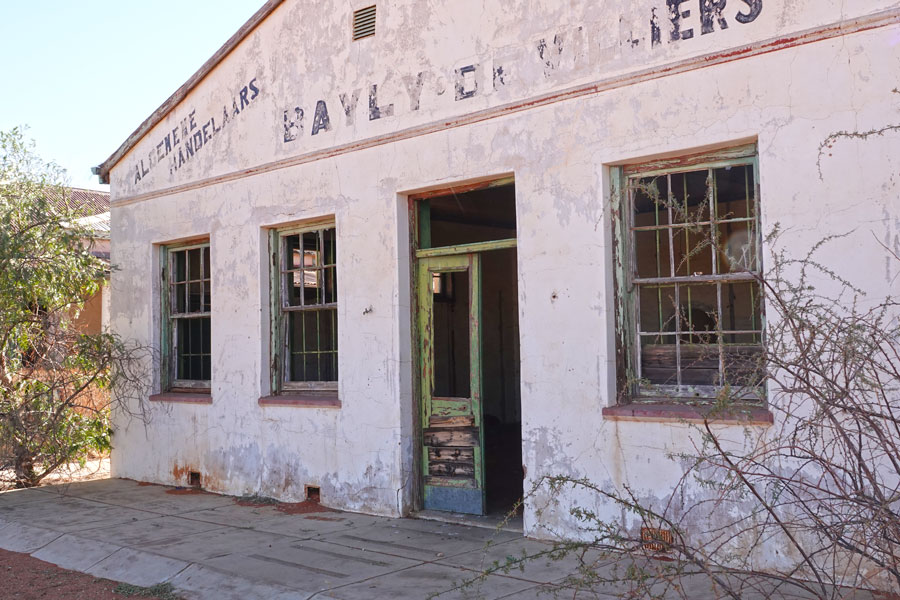 The general dealer, once a hub of the town 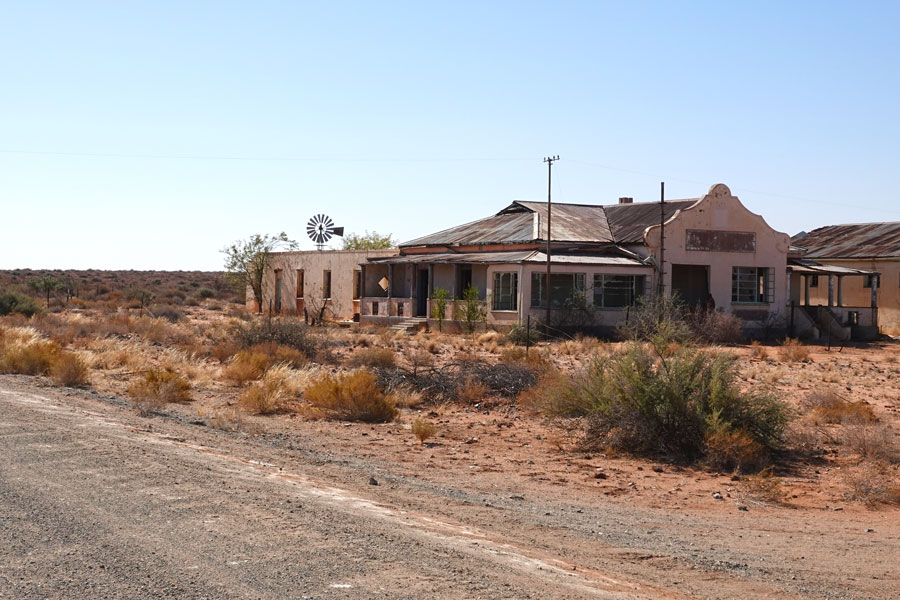 The hotel that once boasted wooden floors and stained-glass windows

I stand in the wind and listen to the eerie flapping of a sheet of loose corrugated iron roofing. I venture into a doorway and startle a rabbit who swiftly hops away. I’m not sure which of our hearts are beating the fastest.  This town that was first called Krombegin (Skewed Beginning) will stay with me a long time as I contemplate its untimely and abrupt ‘skewed ending’. 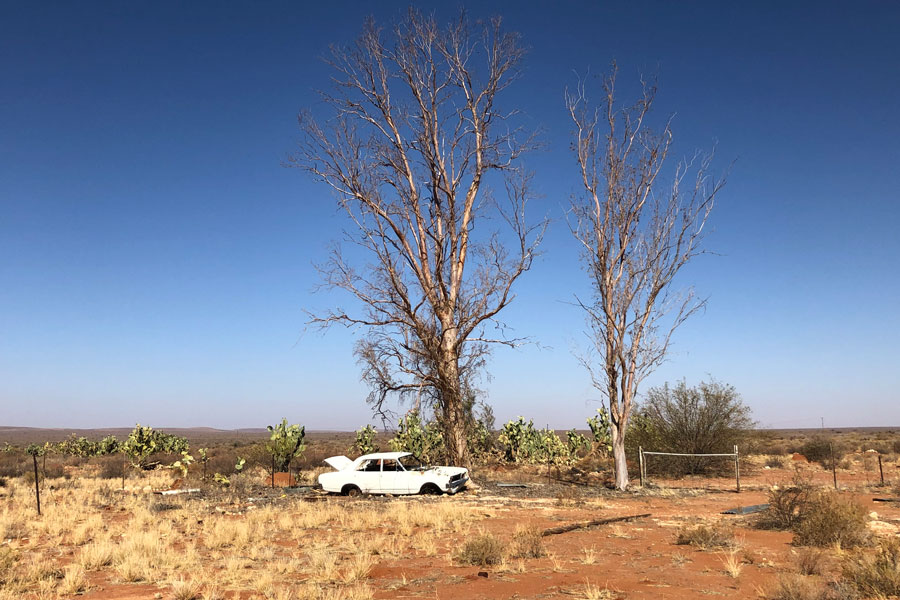