A week long escape to Maputo and Praia do Bilene, Moçambique

The Moçambican policeman steps boldly into the road and pulls our taxi over to the side. Our driver lets out a sigh and eases over against the curb. The policeman and his partner stroll up and position themselves on each side of the vehicle. Reluctantly we wind down the windows.

“Passports,” he demands, peering into the car.

It’s almost 11pm and we are returning to our hotel in central Maputo after a sumptuous meal of grilled prawns and 2M beer.

“We don’t have our passports with us. We locked them in the hotel safe,” we start to explain. This is met with much head-shaking and hands on hips. The driver pleads our case in Portuguese. He gets barked at for his trouble.

The policeman demands that we accompany him to the police station. We explain that our hotel (and the passports) are a mere two blocks away. An elaborate mime of locking a safe is enacted. It is met with more head shaking.

We play the waiting game. We sit still and politely shrug at suggestions to get out of the car while pointing up the hill and saying “Hotel. Passports.” Which gets countered each time with “No passport – Police Station!”

The conversation escalates a notch or two and skirts the subject of a “fine”, or more likely, a bribe. We don’t understand a single word. We smile agreeably and point towards the hotel “Passports in safe”.

After a good 30 minutes at this impasse, the policemen confer and then agree to let us off with a stern warning which involves finger jabbing, strong words and more head shaking.

We are relieved to escape so lightly. We have heard some hair-raising stories about police corruption and bribery in Moçambique, but after a week in the country we haven’t come across anything other than friendly officials.

Moçambique is a mere 5-6 hours from Johannesburg via the picturesque lowveld and is perfect for a quick week away. (Be wary of travelling on public holidays though, as the delays through the border are not insignificant. The day after we whisked through border control, delays were up to 7 hours long due to the onset of a long weekend!)

On entering the country, most people are immediately enticed to the resorts on the more remote parts of the coastline, but we opted for a night in the capital city, Maputo. Maputo’s growing population (approx 1.2 million) seem to have literally burst through the seams of the old Portuguese buildings from the 19th and 20th centuries that in turn, barely survived the devastation of the civil war. The city is showing signs of stabilisation and growth supported by significant investment from China. The impressive Catembe bridge (Africa’s largest suspension bridge that will be 3km in length and have four traffic lanes on completion) sweeps smoothly above the city and across the water. 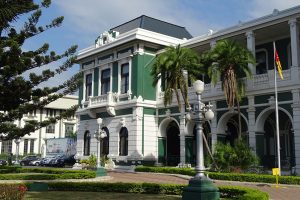 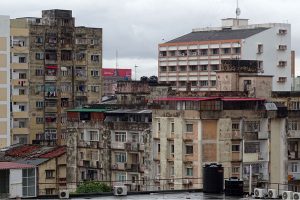 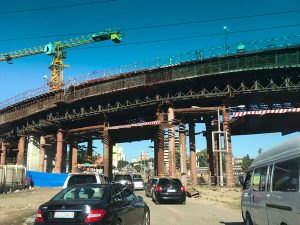 Our first stop was the old Costa do Sol hotel, still clinging to the Art Deco glamour of its colonial heyday and over-looking the palm fringed beach front and the felucca fishing boats. Famous through the decades for its seafood, the prawn rissoles that we demolished, seem to have stood the test of time. 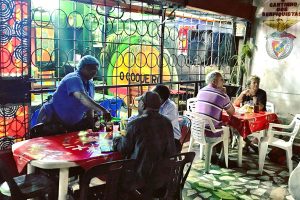 For dinner we opted for authentic local fare at Feira Popular, located close to the ferry dock. First impressions were not good. The whole area was dark and unquestionably seedy, but as there seemed to be a couple of interesting places to eat and our friends had been there some years before, we chose an atmospheric spot (colorful lights and pumping out good music) and it turned out to have outstanding shrimp curry and flame grilled chicken. Our entire meal for four people, including beers was Mt 2000 (about R420). Unbelievable value.

Our next destination was a beach resort in Praia do Bilene, supposedly 3.5 hours northwards, but it took us most of the day to get there. This is because although the roads are good, the speed limits are generally no more than 80 Kph and drop off to 60 quite frequently. The significant traffic law enforcement presence meant that you don’t take chances! Then there are the colourful markets where you can pick up toasted cashews and enormous avos. We also stopped for great coffee and the best Pasteis di Nata ever.

We arrived at the Bilene (pronounced like Milan) market and picked up some light provisions including soft and crispy pãu (bread) and the delicious local beer, 2M.

The route to our resort involved either a lengthy and somewhat vague trip through the dunes, which would require letting down tyres etc., or a swift dash across the lagoon by boat. We opted for the latter, bravely leaving our car under a tree with self-appointed guard, Manuel.

Nghunghwa resort was exactly what we needed after a long hot day of travelling in Africa. Friendly welcoming staff, wavy palm trees, soft white sand and ice cold beers. And the promising aroma of prawns roasting on an open fire.

Lazy days ensued. We got up early to photograph the local fishermen returning with their catches and then went back to bed.

When we got tired of reading, resting, swimming and drinking….ok we didn’t get tired, but we thought we should get off our butts and look around a bit…we were taken by boat to a spot at the end of the lagoon. After a climb over the dunes headlong into a fresh breeze, we suddenly came face to face with the Indian Ocean, as vast and as wild and as powerful as you can imagine. We marvelled at the resilience of the scurrying crabs being pounded on the steep beach, we spotted turtles casually swimming in the crazy breakers, we admired the enormous teal waves and dashed out of reach of the hissing white foam that raced up the shore. 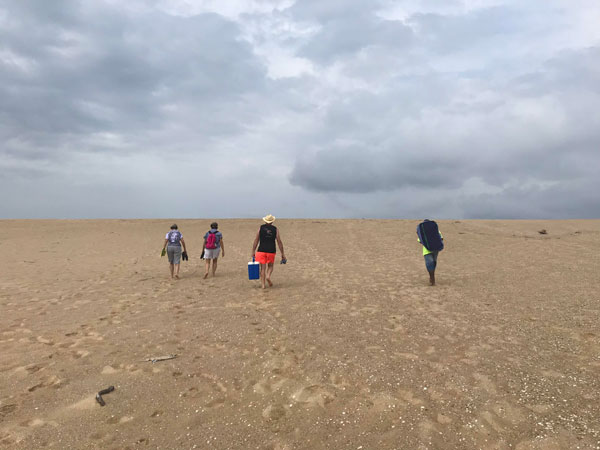 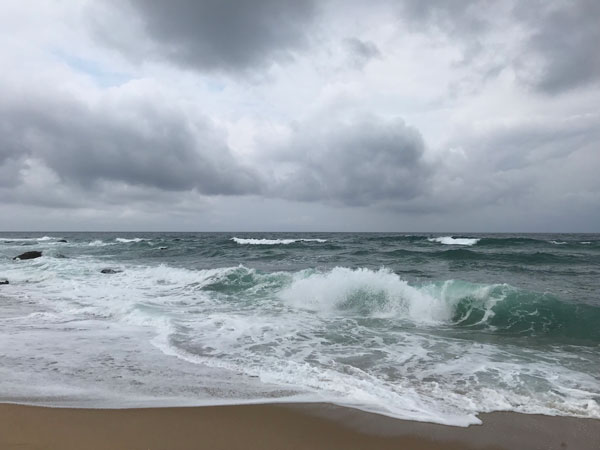 On our last night in Moçambique, we experienced the full might of a tropical African storm. We’d gone for supper at the local fish market (where you select your meal from wonderful fresh-from-the-sea produce) and it gets prepared for you while you nibble some nuts washed down with a caipirinha or a beer.

The fat drops of rain began splashing down so hard that we had to move deeper into the tent made up of big shade umbrellas and plastic sheeting. Soon though, the weight of the water began to collapse the tent and the rain came flooding into the restaurant. Unperturbed, our gracious hosts made room for us in their tiny kitchen-come-serving area. We cozied up at a table and good-naturedly passed across cooking oil or potatoes or beer from the fridge as required by the chef while the storm raged outside.

Somehow the smokey prawns, crispy potato chips and fresh salad tasted all the better for the peculiar dining circumstances and we laughed ourselves silly above the roar of the raging torrent and enkindled our souls with a warming shot of 1920 brandy. 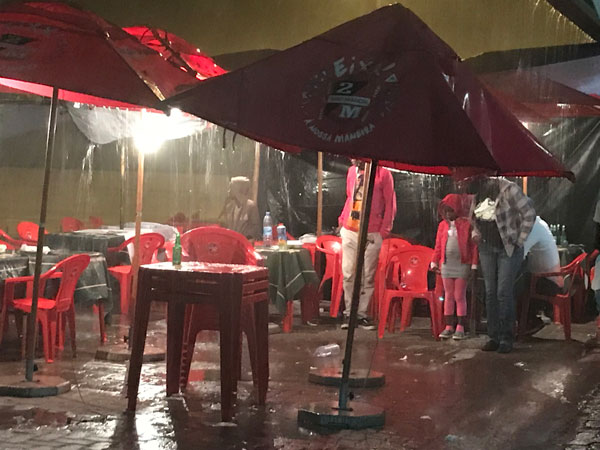 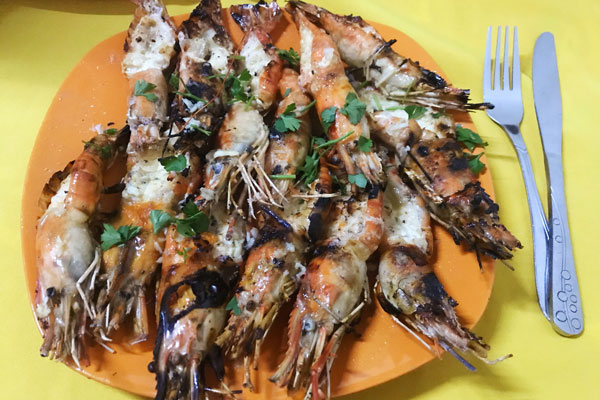 Can there be anything tastier than #steaktartare?