Ushuaia, Argentina – “The end of the world”🇦🇷

Ushuaia is a charming resort town at the base of Argentina. It’s located on the Tierra del Fuego archipelago, the southernmost tip of South America, and is nicknamed the “End of the World.” There is even a post office from where you can send family and friends a postcard that is stamped “End of the World.” 😄

The windswept town, perched on a steep hill, is surrounded by the Martial Mountains. It’s the gateway to Antarctica cruises and seeing the ships preparing to depart, bound for Antartica, adds a sense of exciting anticipation to the air.

Ushuaia is perched between the snow capped Andes and the famed Beagle Channel and consists of steep streets and a jumble of buildings. The town has been a missionary base, penal colony (because of the harsh living conditions in this part of the world, the worst criminals were sent here!) and a naval base for the Argentine navy, but over the last decade or two it has transformed itself (with an admitted lack of urban planning) into a major tourist destination complete with casinos, five-star hotels and a good selection of restaurants.

Upon disembarking from the Mare Australis cruise ship after our 3 day/4 night cruise around Cape Horn from Punta Arenas, Chile, we set off for a 2 hour horse-riding excursion. The horses follow a trail through lush sub-antarctic forest towards the shores of the Beagle Channel. Riding through the most spectacular scenery beneath snow-capped peaks and through flowing rivers and incredible views, was a wonderful opportunity to explore the area. We were able to see across to the imposing Navarino and Hoste Islands of Chile. 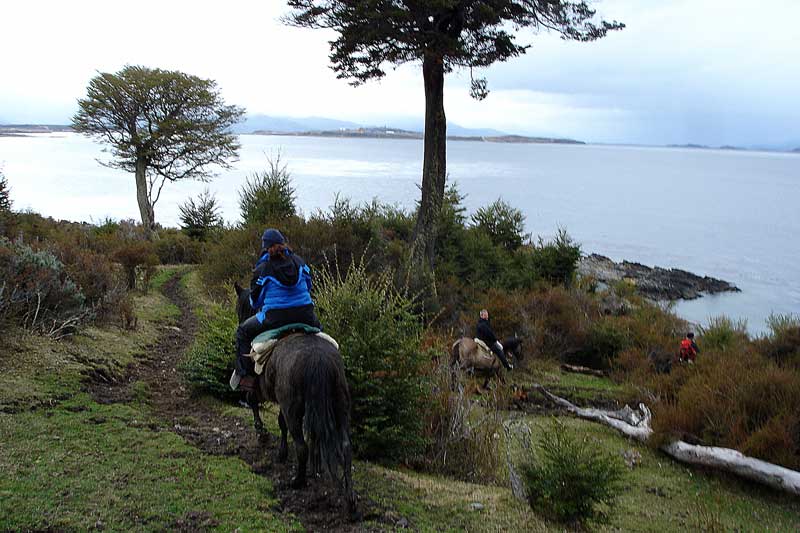 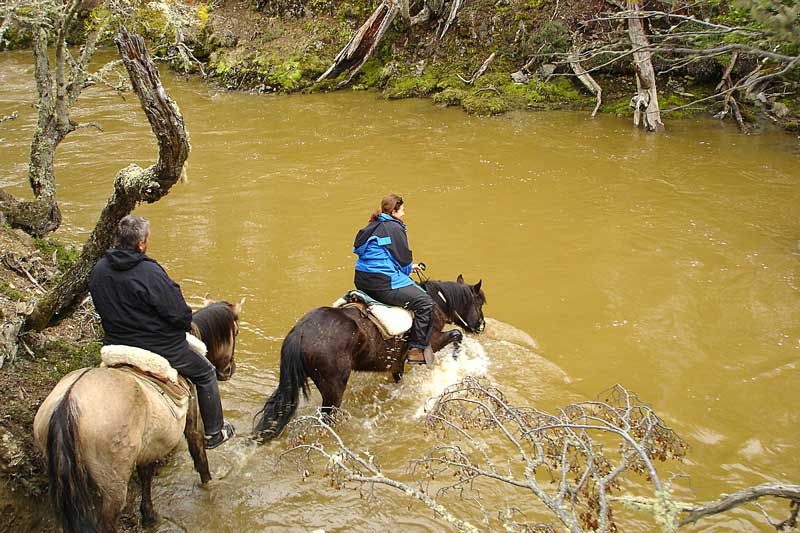 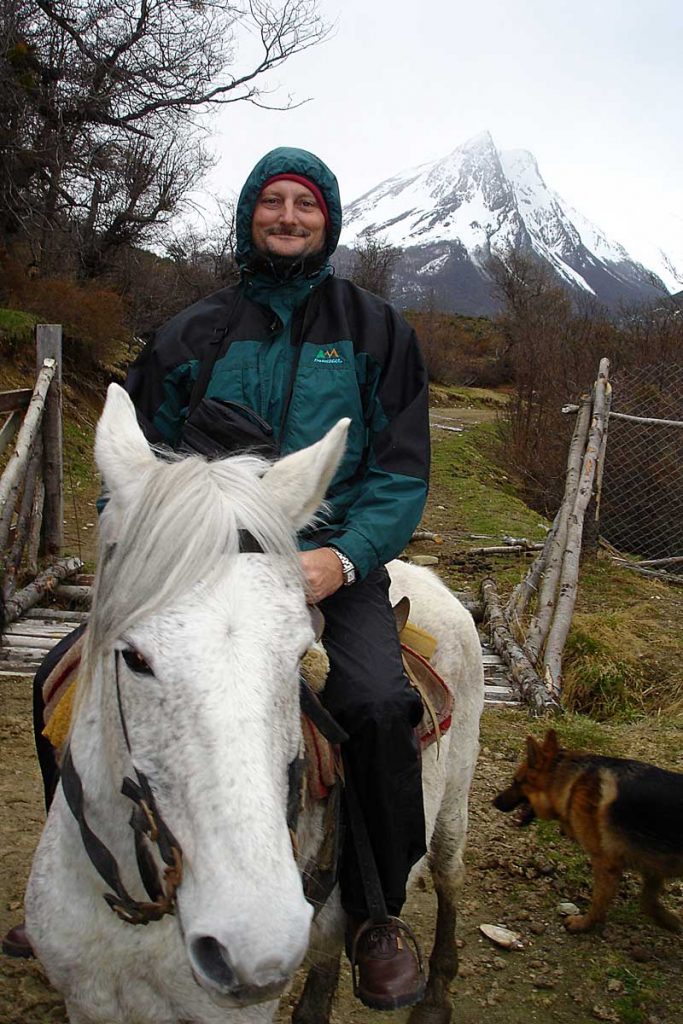 We set off to locate our accommodation for the next couple of days. B&B Posada del Fin del Mundo was a lovely old building, carefully maintained. We settled in immediately and made friends with their crazy pup. 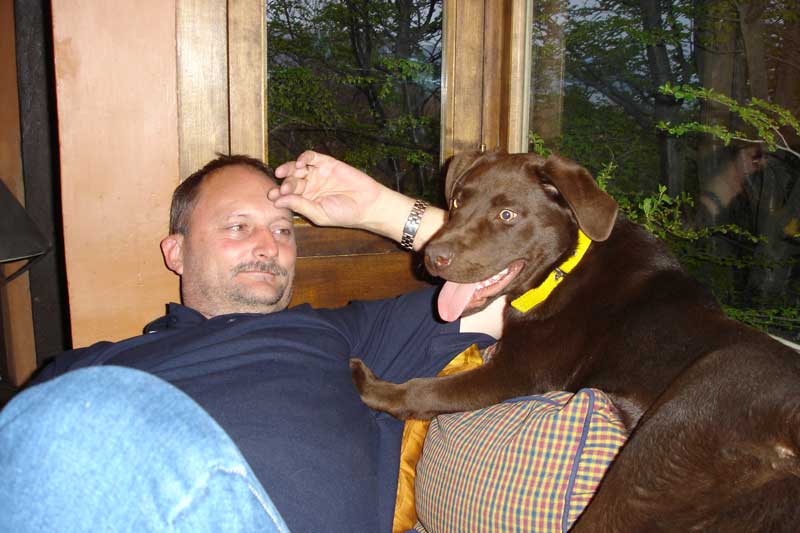 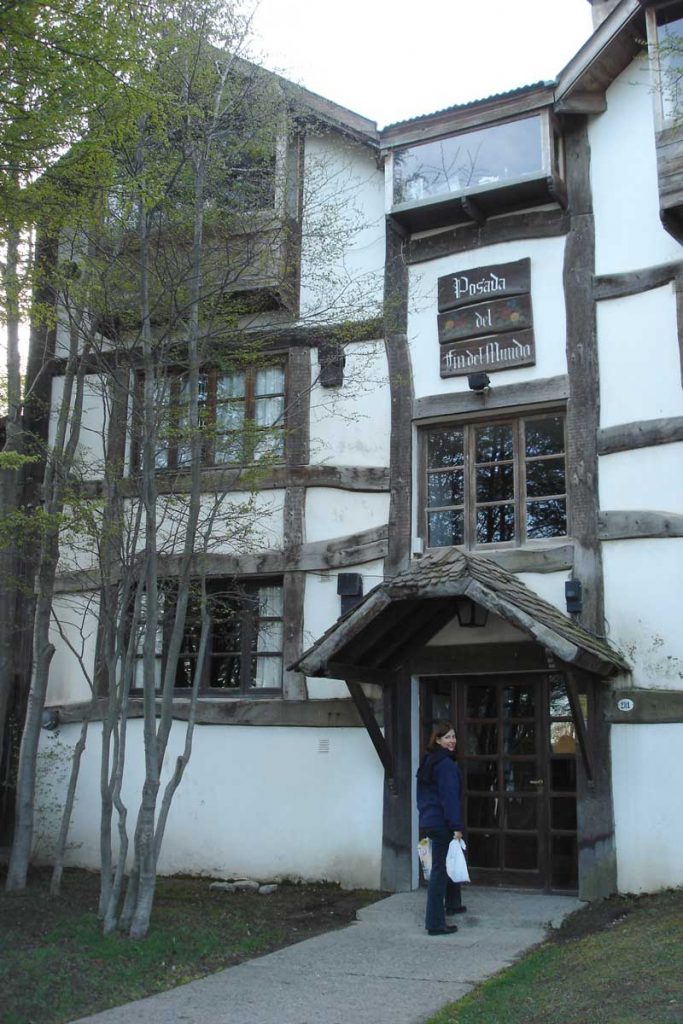 We were told that the best things to do were to visit the Tierra del Fuego National Park; to hike up the glacier; or to take a trip in the Beagle Channel. Seeing as we had done most of these things as part of our three day cruise from Punta Arenas, we didn’t feel the need to rush off and do these activities.

We spent some time wandering around the town. There were lots of shops selling foul-weather gear and equipment for braving Antartica conditions. We were amazed to discover a Michelin star restaurant and treated ourselves to dinner there on our first evening. 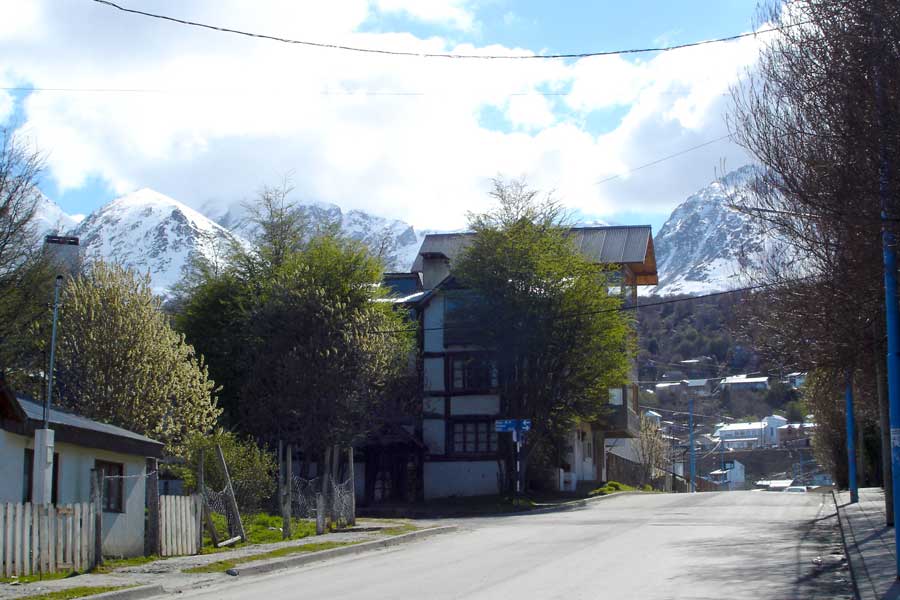 Enthralled by the beckoning snowline just behind our B&B, we decided to attempt a hike up to the snow. It took quite a brisk walk to get to the first deposits, (which were more icy puddles than soft stuff that you can play in!) and you can see by the grin on my face, how exciting it was for us Africans to finally stand in a patch of snow again. Beyond that point the snow had fallen more thickly and we soon found ourselves approaching the ski lifts belonging to the Glaciar Martial ski resort. 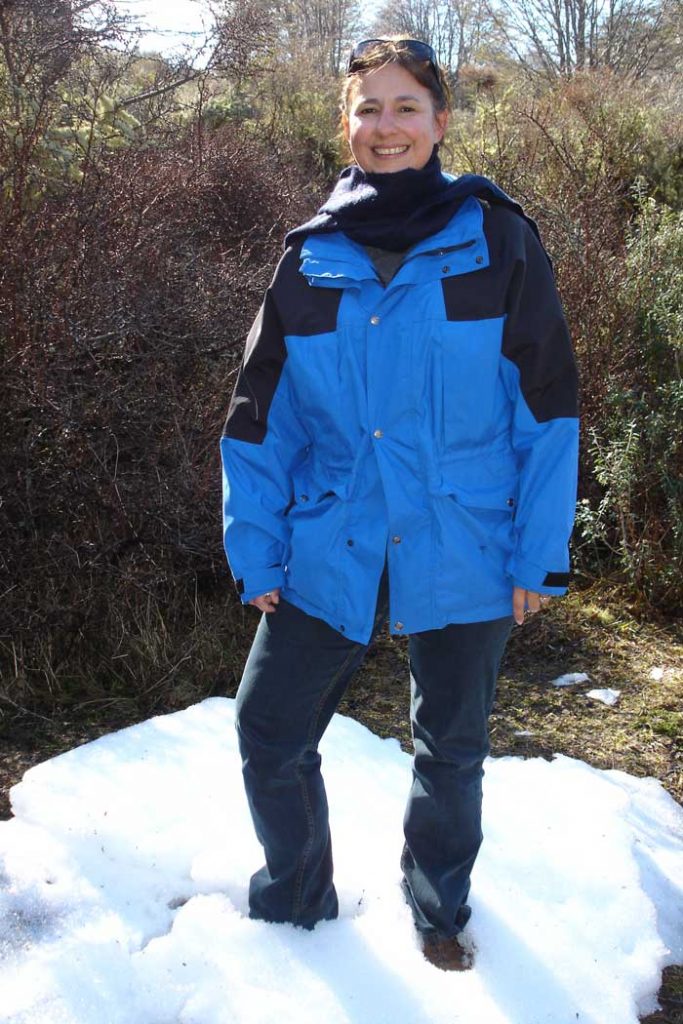 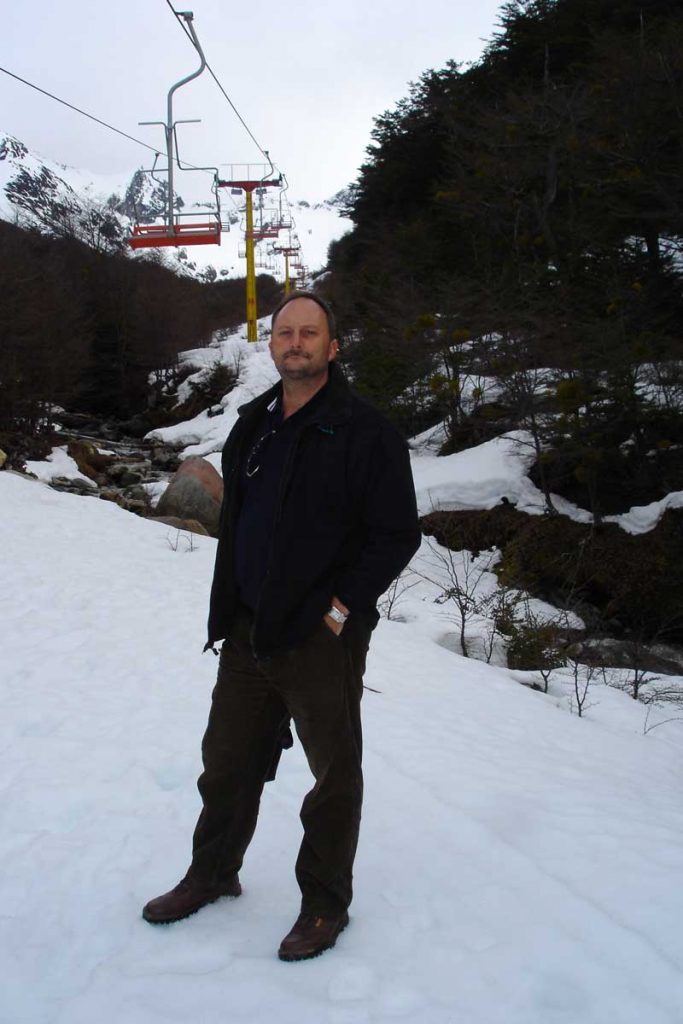 Trying to get back off the mountain sounds easier than it turned out to be. Instead of retracing our steps exactly we wandered off heading down-hill and  would walk cross-country for ages only to be thwarted by a great big chasm in the mountain or an imposing fence. By the time we got back to our B&B we were exhausted! 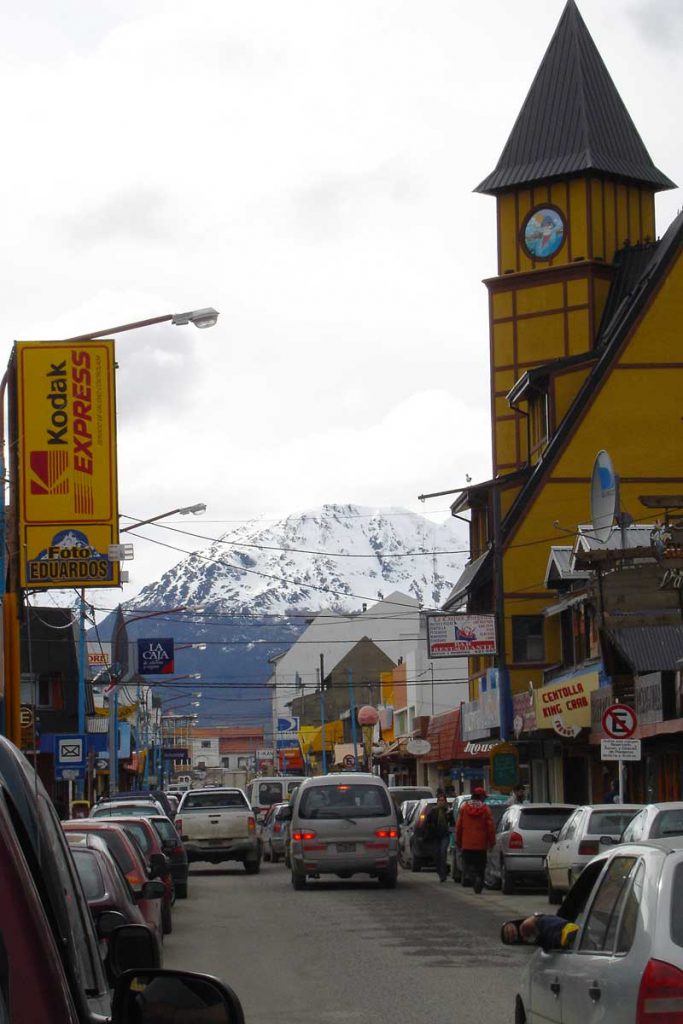 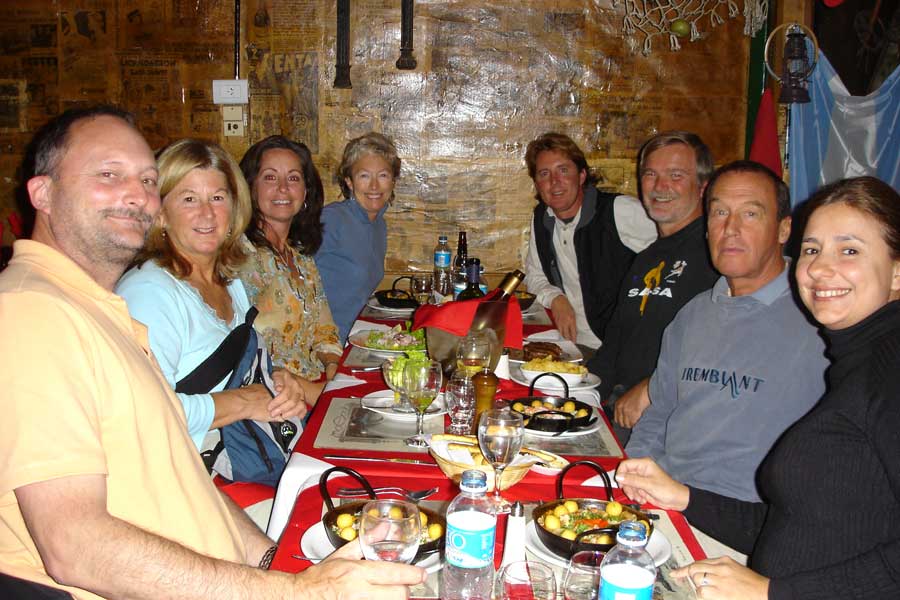 On our last evening we caught up with Rankin and Sandy again who invited us to join them and a bunch of their sailing friends. Apparently the three couples meet up periodically as they sail around the Caribbean etc and have become good friends. We were enthralled by their sailing stories and hair-raising adventures.

I’ve always been inspired by the far corners of the globe. Those remote places where one continent ends, tumbling into the sea beckoning you towards further exploration over the horizon. Ushuaia is that sort place and I wondered if we would return one day to take a trip to Antartica?